Meanwhile, the Fed relentlessly sheds MBS, replacing them with Treasuries, including short-term Bills.

Total assets on the Fed’s balance sheet jumped by $184 billion over the past month through October 2, to $3.95 trillion, according to the Fed’s balance sheet released Thursday afternoon. This increase was mainly a result of the New York Fed’s repo operations – particularly the three repo operations with 14-day maturities that will all unwind next week: 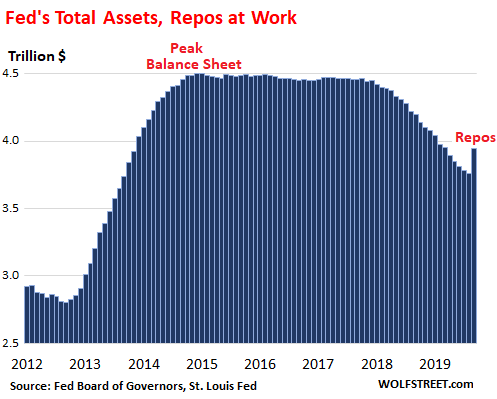 The New York Fed used to conduct repo operations routinely as its standard way of controlling short-term interest rates. When short-term rates spiked following the 9-11 attacks, the Fed responded with a burst of repos for six days, at which point short-term rates settled down, and those repos unwound. When Lehman and AIG collapsed in September 2008, the Fed switched from repo operations to emergency bailout loans, zero-interest-rate policy, QE, and other “tools.” Repos were no longer needed to control short-term rates and were halted. Then last month, as repo rates spiked, the New York Fed dusted off its trusty old repo tool.

Overnight repos are continuing. For example, this morning (Oct. 4), the Fed accepted $38.55 billion, meaning the Fed gave market participants $38.55 billion in cash, in return for securities: It bought $29.5 billion in Treasury securities and $9.05 billion in Mortgage Backed Securities backed by Government Sponsored Enterprises. The repurchase agreements specify that the sellers (such as banks) have to buy them back the next business day (Monday), which is when those repos will unwind. Overnight repurchase agreements, though they’re not legally loans, function like overnight loans.

The three 14-day repos amount to a total of $139 billion. All three will mature and unwind next week:

This chart shows the balances of all repos maturing within 15 days – overnight and 14-day repos combined – on the Fed’s weekly balance sheets since 2007: 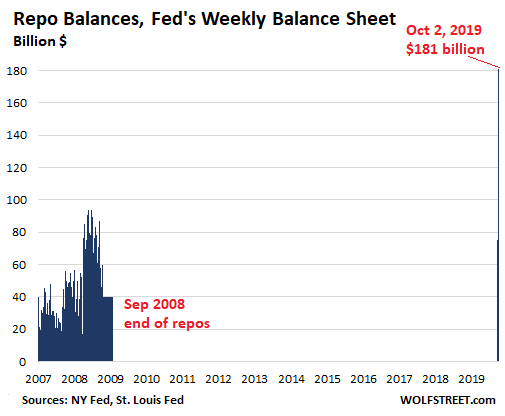 On the Fed’s balance sheet, these repo balances are carried in a separate account, called “repurchase agreements.” For more detail, this chart shows the same balances of repos maturing within 15 days but only for the Fed’s weekly balance sheets since June 2019: 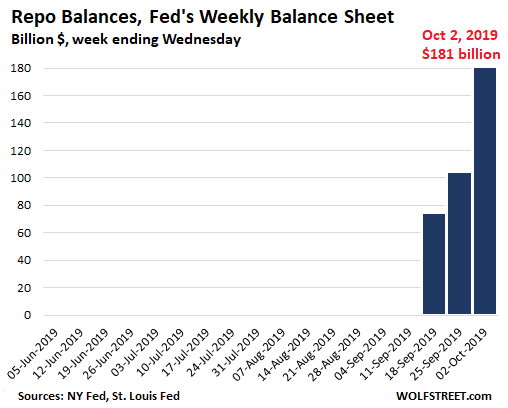 Meanwhile, the MBS run-off continues and exceeds “cap” for fifth month in a row

In September, the balance of Mortgage Backed Securities (MBS) from its QE program fell by $22 billion – exceeding the self-imposed cap of $20 billion per month for the fifth month in a row – to $1.47 trillion, below where it had first been in December 2013. Over the last five months, the Fed has shed $116 billion in MBS: 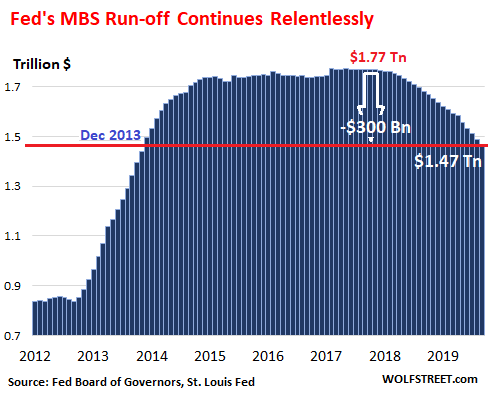 Mortgage interest rates have fallen since November, which has triggered a surge in mortgage refinancings, and the pass-through principal payments to holders of MBS have surged as well.

The Fed has stated that it wants to get rid of the MBS on its balance sheet entirely because they’re cumbersome for conducting monetary policy. And it has stated that by holding MBS, it’s giving preferential treatment to housing debt over other forms of private-sector debt, and it wants to end assigning these types of preferences.

Treasury Securities pick up slack from the MBS run-off 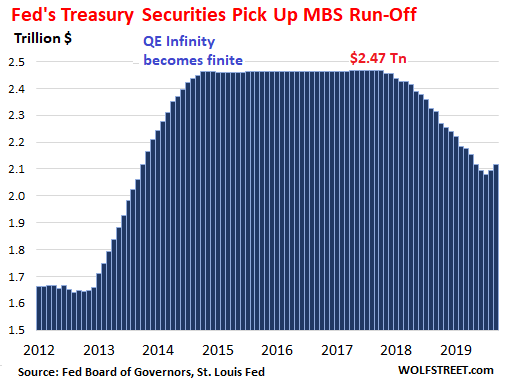 The thing to watch next week will be how the unwind of the three 14-day repo batches is going. Market participants have to cough up $139 billion and hand them to the Fed. This is a lot of moolah for one week and could put some strain on the repo market. So this morning, the Fed announced that has scheduled new 14-day repos and one 6-day repo, occurring three a week, through the end of October, which would make unwinding the current batch of 14-day repos a lot easier. It also said that it will continue the overnight repos through November 4.

If demand for the coming 14-day repos subsides or disappears, and overnight repos are consistently under-subscribed, we know that the repo market turmoil has settled down for now. If it doesn’t, well, then we can speculate all over again as to who is still out of cash.

If the US dollar loses its hegemony as a global reserve currency, it would be a sea change globally, and specifically for the US economy. So we got the next installment in that saga. Read…  US Dollar Status as Global Reserve Currency Slides