The hullabaloo in the repo market torpedoed the function of Interest on Excess Reserves and forced the Fed to go back to the future.

With its announcement this morning, the New York Fed confirmed that the Fed’s Plan A of manipulating the federal funds rate into its target range – now between 1.75% and 2.0% — has miserably failed, and that it will switch to Plan B to control short-term interest rates. But this Plan B used to be Plan A that the Fed had routinely deployed to control short-term interest rates before the Financial Crisis. So back to the future.

The “repo operations” the New York Fed has been conducting since Tuesday were overnight repurchase agreements (ultra-short-term loans), where in the morning, the New York Fed offers up to $75 billion in cash at an interest rate that is within the Fed’s target range. These loans are secured by collateral. The allowed collateral are Treasury securities, Agency securities, and mortgage-backed securities guaranteed by the Government Sponsored Enterprises (GSEs).

These overnight interest-bearing loans unwind the next morning, with the Fed getting its $75 billion in cash back, and the dealers getting their collateral back. As these operations were undertaken every day for the past four days, it’s essentially the same $75 billion that gets recycled every day. The daily amounts are not additive. And these operations have nothing to do with QE.

Back in the day, the New York Fed used to conduct these repo operations routinely. But in September 2008, when Lehman and AIG collapsed, the Fed switched from repo operations to emergency bailout loans, zero-interest-rate policy (ZIRP), QE, and other tricks and devices. Repos were no longer needed to control rates.

The chart below shows the tail-end of the era of repo operations through 2008. The spike in repo operations following September 11, 2001, occurred when the Fed briefly injected massive amounts of cash via repos, as funding had dried up, and short-term rates were blowing out: 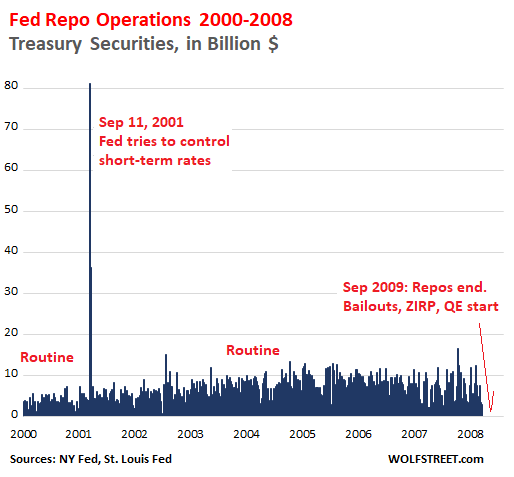 During the September 11, 2001 panic, the Fed conducted these massive repo operations for six mornings in a row. Like all overnight repos, these repos unwound the next day, with the Fed getting its cash back and with banks getting their collateral back.

This chart shows the detail of those operations. Note the amounts, reaching $81 billion on September 14, 2001. Four days later, the operations were over, markets had settled down, overnight funding was plentiful, the Fed got its cash back, and the dealers got their collateral back: 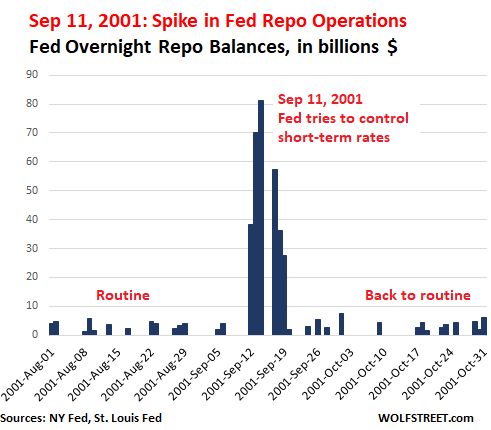 In September 2008, when the US financial system was threatening to freeze up, the Fed developed new tools on the spot, including bailout emergency loans to banks, industrial companies, and market players under a variety of programs, and it shifted to ZIRP and QE. But it stopped the repo operations because they weren’t needed anymore.

Before the Financial Crisis, there were no Excess Reserves, which are deposits that banks park at the Fed to earn the interest, have instant liquidity, and fulfill regulatory capital and liquidity requirements. Excess Reserves started piling up in parallel with QE and peaked in December 2014. Since then, they have fallen by nearly half, to $1.38 trillion.

And on Monday this week, all heck broke loose in the short-term funding market, which is precisely what the Fed is supposed to be able to keep under control.

On Tuesday, the New York Fed announced its first repo operation since September 2008. But the magnitude of the financial world has changed over those years: In 2001, the total amount of Treasury debt was $5.6 trillion. Now it is over four times larger, $22.6 trillion. Financialization of everything is a booming business, and the bets have gotten larger, the debt has gotten larger, there is more collateral, and so the amounts have gotten much larger.

If peak-repo day on Sep 14, 2001, is multiplied by four, in parallel with the growth of the US Treasury debt, an equivalent overnight repo operation today would amount to $244 billion. So the $75 billion this morning is small fry. In the chart below of 19 years of repo operations, the thin line on the right represents the past four days: 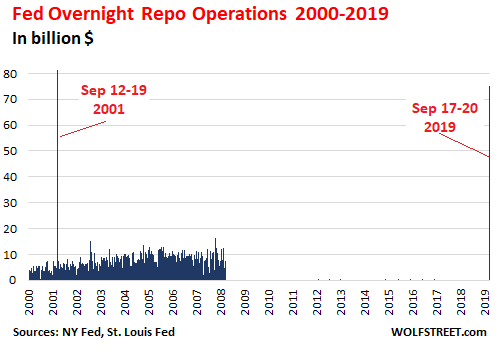 Just looking at the repo operations of the last 30 days: 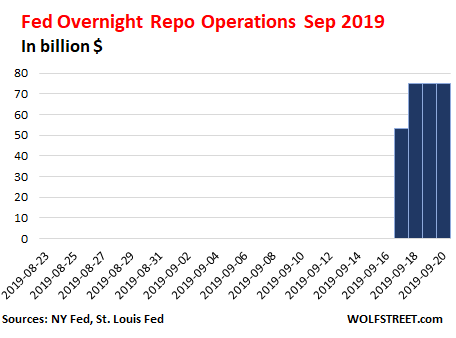 Admission that Plan A failed; Plan B is now standard.

So here is what the New York Fed, which handles the repos, announced this morning “to help maintain the federal funds rate within the target range”:

This third point is admission that the repo facility is now once again an integral part of managing short-term interest rates, as it was before September 2008.

The St. Louis Fed already proposed this months ago.

The St. Louis Fed published two papers on the benefits of a “Standing Repo Facility,” the first paper in March 2019 and the follow-up in April 2019. This standing repo facility is now in operation, officialized by the New York Fed as of this morning.

The two key – but “distinct” – motivations for a standing repo facility are, as cited in the follow-up paper:

First, the facility could be used to support interest rate control by establishing a ceiling on repo rates, thereby guarding against unwanted spikes in money market rates. The use of a ceiling tool for this purpose would be seen as enhancing the monetary policy operating regime of the FOMC.

Second, the facility could be used to reduce the demand for reserves for any given rate of interest on excess reserves.

The first motivation is why the NY Fed uses the facility now: to control spikes in money market rates as seen over the past week and keep the federal funds rate within the Fed’s target range.

The second motivation would be to reduce the excess reserves presumably needed to control the federal funds rate via the IOER. These reserves and the IOER would become less important, because repo operations now pick up much of the work of controlling money market rates. And the level of those reserves (currently $1.38 trillion) could be reduced further, allowing the Fed’s balance sheet to shrink further:

Why the desire to minimize the demand for reserves? In short, because it accords with the FOMC’s stated preference to operate a floor system with the minimum level of reserves necessary to permit the efficient and effective conduct of monetary policy: “minimally ample reserves” for short.

So this standing repo facility, as we’re looking at it today, takes pressure off those reserves, and it takes the Fed back a step closer to managing short term rates as it used to do before the Financial Crisis.

Nevertheless, the fact that the Fed was forced all of a sudden by a panicky market to abandon Plan A and revert to how it used to do it, rather than implementing the transition methodically, on its own, in its gradual manner, must have come as a shock.

161 comments for “Fed Admits Failure of ‘Plan A’ to Control Money Market Rates, Shifts Back to Repos (which was ‘Plan A’ till 2008)”