If the US dollar loses its hegemony as a global reserve currency, it would be a sea change globally, and specifically for the US economy. Today, we got the next installment in that saga, via the IMF’s quarterly COFER data on foreign exchange reserves. 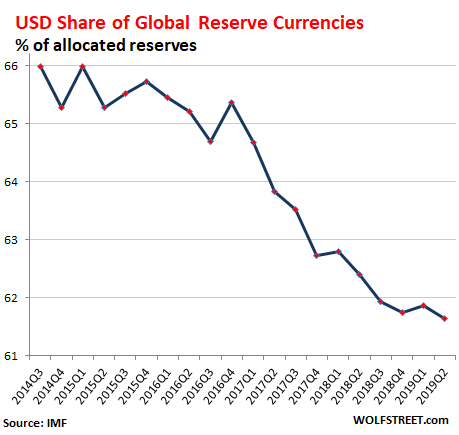 The US dollar’s share of global reserve currency declines when central banks other than the Fed proportionately reduce their dollar-denominated assets and add assets denominated in other currencies. 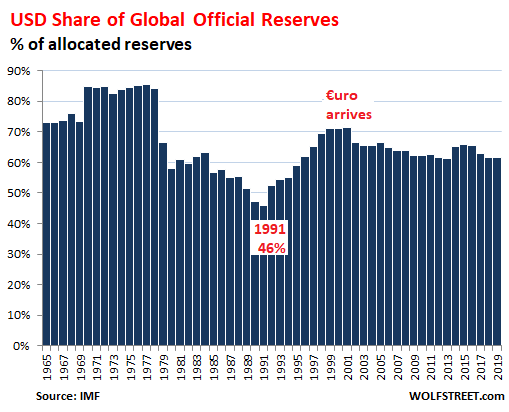 However, the Fed’s holdings of foreign-currency denominated assets are included in the other currencies. Unlike some other central banks, the Fed holds just a smidgen in foreign currency assets – currently $20.6 billion worth, compared to, for example, China’s $3.1 trillion in foreign exchange reserves.

The euro has been replacing in phases the national currencies of EU member states, starting with five currencies, which included the Deutsche mark, a major reserve currency at its time, but way below the dollar. A huge amount of optimism was attached to the euro when it arrived. The predecessor currency assets converted into euro assets, but central banks then piled on additional euro assets. During the early phases, the dollar’s share dropped from 71.5% in 2001 to 66.5% in 2002.

Today, if the 19 member states in the Eurozone were one country, it would be the largest economy in the world. Combining these European currencies into one currency gave rise to the hope in the early days of ending the dollar hegemony. The goal was for the euro to achieve parity with the dollar. These hopes were brutally derailed by the euro sovereign debt crisis, and the euro got stuck at a share of around 20% — 20.3% in the second quarter 2019.

Since its inclusion in the IMF’s currency basket – the Special Drawing Rights (SDR) – in October 2016, the Chinese renminbi has been officially a global reserve currency. But the patience of folks who’re hoping that the renminbi would quickly knock the dollar off its perch continues to be severely tested: In the second quarter, the share of the renminbi ticked up a smidgen to a record but tiny share of 1.97%.

In the overall scheme of things

The chart below shows the dollar’s slowly declining but still hegemonic share of foreign exchange reserves, the euro’s essentially flat share, and the other reserve currencies’ comparatively tiny share. The renminbi (RMB) is the short red line near the very bottom: 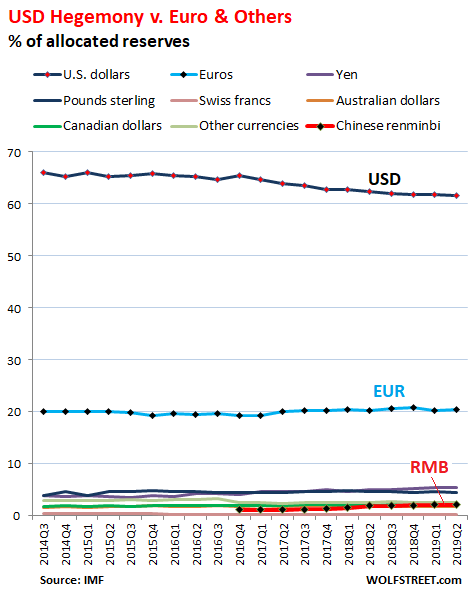 To shed some light on the tangle of currencies at the bottom of the chart above, it’s useful to look at them without the US dollar and the euro overshadowing the neighborhood: 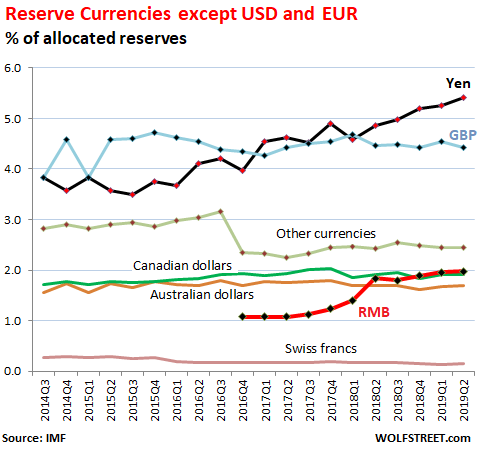 The relationship is the other way around: The US dollar being the largest reserve currency (and the largest international funding currency) permits the US to easily fund its trade deficits. The reserve currency status of the dollar has enabled policies by the US government and actions by Corporate America that ultimately have led to the huge trade deficits that took off three decades ago and have continued to balloon.

99 comments for “US Dollar Status as Global Reserve Currency Slides”