After peak negative-yield-absurdity in August, bond prices fell – the “bond bloodbath” – and the mountain of bonds with negative yields has plunged by $5 Trillion, or by 30%, despite rate cuts.

The 10-year US Treasury yield rose on Friday to 1.94%. That’s still very low, and below inflation as measured by core CPI (2.4%), but it’s up nearly 50 basis points from the lows at the end of August. During this time, the Fed has cut its interest rate target twice, by a total of 50 basis points, and short-term Treasury yields have fallen by about that much. With the one-month yield now down to 1.56% and the 10-year yield up at 1.94%, the yield curve has un-inverted and steepened.

US debt isn’t the only place where long-term yields have been rising despite major central banks’ action or at least verbiage on the rate-cut and QE side. The rise in long-term yields despite ultra-low or negative shorter-term yields has reverberated around much of the world.

When yields rise, bond prices fall, and what has been going on has been described as “bond bloodbath.” That term may be pushing it, considering what a real bond bloodbath could look like.

But for holders of long-term bonds that they bought with negative yields, it is a very unpleasant experience when prices of those negative-yielding bonds also drop. And that’s what they’re facing now.

In the Eurozone, where the ECB in September cut its deposit rate deeper into the negative, long-term yields have risen across the board.

Germany’s 30-year bonds are infamous for the government’s efforts to sell them at a negative yield of -0.11% on August 21. The bonds were offered with a 0% coupon – so no interest payments for 30 years – and at a premium, in order to achieve the negative yield of -0.11%. This effort that mostly failed: €2 billion of these insane bonds were offered, but there weren’t enough brain-dead investors, and those that the government could round up bought only €824 million. That day marked peak-negative-yield absurdity.

The French 10-year yield transitioned into the positive on Thursday for the first time since July and closed on Friday in the positive (+0.023%), up almost 50 basis points from -0.45% at the end of August.

The Spanish 10-year yield which had come close to zero at the end of August rose to 0.39% by Friday.

The Belgian 10-year yield, which had dropped as low as -0.38% at the end of August, turned positive on Thursday for the first time since July and closed on Friday with a yield of 0.02%, up 40 basis points from August.

The Italian 10-year yield, which never made it into the negative despite Draghi’s best efforts, rose 30 basis points from 0.82% in early September to 1.18% on Friday.

In Switzerland – the first country to actually sell new 10-year bonds with a negative yield in April 2015 – the 10-year yield had bottomed out at -1.10% on August 16, and has since soared 70 basis points to -0.40%. Those are true punishment bonds for folks who bought them in mid-August. For those buyers, the annual yield will be -1.1% until they get rid of those bonds, but now the bonds are also losing value, and if those August buyers want to sell the bonds, they will also have a capital loss.

In Japan – the second largest government bond market in the world, if you can call it a “market” though it’s totally controlled and dominated by the Bank of Japan – the 10-year yield has risen from -0.29% at the end of August to -0.06% now.

And this has played out across much of the negative-yield world, where short-term yields remain negative, but long-term yields have risen as bond prices have fallen.

The mountainous amount of negative yielding debt had peaked at a mind-bending $17.03 trillion on August 29, but has since then plunged by $5 trillion, or by 30%, to $11.94 trillion on Friday, still a huge gigantic amount of sheer absurdity, but the lowest amount since June, according to the BNYDMVU Index, posted by Bloomberg’s Lisa Abramowicz (click to enlarge): 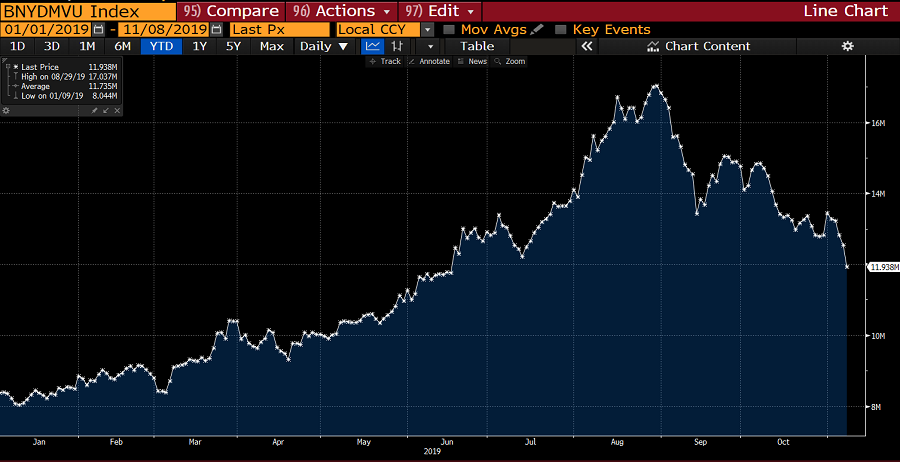 This comes at a time when investors are having to absorb a flood of government and corporate debt coming on the market in the US, Europe, and elsewhere, looking for buyers.

The ECB, the Bank of Japan, and the Swiss National Bank have already admitted that negative interest rates weaken banks and have recently offered deals to banks to “mitigate” those destructive effects. Bank stocks in Europe and Japan are trading in the realm where they’d traded decades ago.

But negative interest rates or very low interest rates have an even more destructive impact on the real economy: They not only create asset bubbles, and all the risks that come with them, but they also distort or eliminate the most important factor in economic decision making – the pricing of risk. Here is the transcript from my podcast, How Negative Interest Rates Screw up the Economy