It happened. Hallelujah. Or maybe better: Watch Out! The yield curve, after having been at least partially inverted all year, un-inverted today.

The yield curve still kind of flat at the short end, but the middle-aged sag is gone, and the long end with maturities of seven years and up is higher than the short end. It’s not exactly spectacularly steep, but all the long-dated yields are higher than the shorter-dated yields. The chart shows the yield of each maturity today at the close of the bond market, from one month on the left to 30 years on the right: 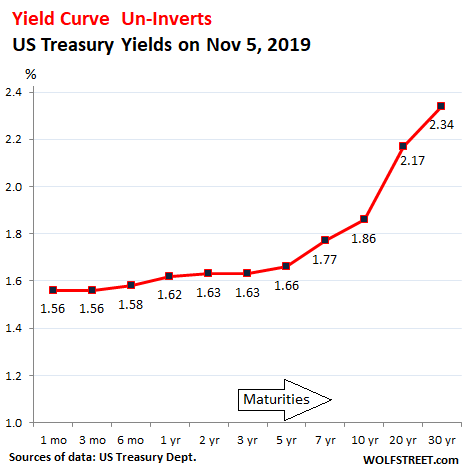 And this happened because several factors came together:

The chart below shows the yield curves on seven days, from December 14, 2016, when the Fed got serious with rate hikes (green line coming up from the bottom), to today (the thick red line): 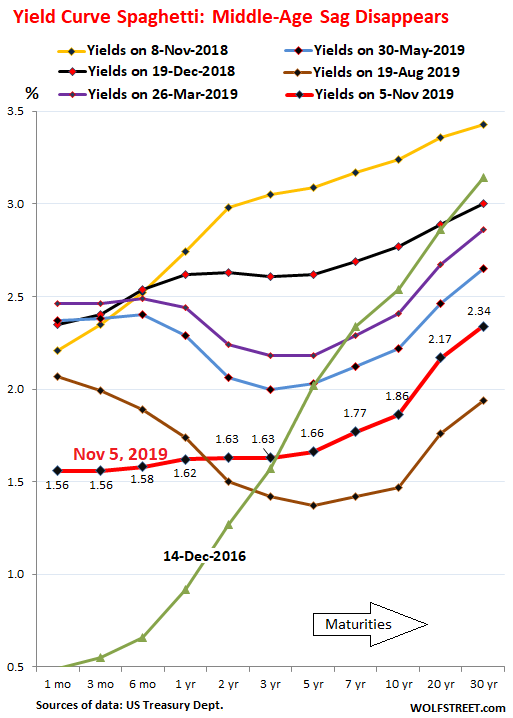 By December 2018, the sag in the middle was already appearing, and it got worse and worse until it maxed out in August 2019 (brown line). Since then, the Fed cut rates twice, which brought down the short end. In addition, long-term yields have risen.

The Fed will breathe a huge sigh of relief. Inverted yield curves are no good over the long term. Everything gets screwed up, from banking profits to investment decisions, when short-term yields are higher than long-term yields.

Part of the motivation for cutting rates had also been the desire to un-invert the yield curve. The Fed has instituted other policy changes this year that put slight upward pressure on long-term yields: It is replacing Mortgage Backed Securities and Treasuries of longer maturities on its balance sheet with short-term Treasury bills. These policy moves are designed to push long-term rates up – and it has started to happen.

Whose Bets are Getting Bailed Out by the Fed’s Repos & Treasury Bill Purchases? Read...  THE WOLF STREET REPORT: What’s Behind the Fed’s Bailout of the Repo Market?