Ending the repo market blowout and un-inverting the yield curve.

Since Fed Chair Jerome Powell’s initial explanation of the Fed’s new plan, and with a big push this morning from the Fed’s announcement of the actual details of the plan, the 10-year Treasury yield has jumped 23 basis points, from 1.52% when he was speaking on Tuesday to 1.75% at the moment. And the yield curve has steepened and is getting close to un-inverting. Here is what happened.

The New York Fed released a statement this morning that formalizes and details what Jerome Powell had said on Tuesday and what the FOMC minutes, released on Wednesday, had indicated the Fed would do: Buy short-term Treasury bills with  maturities of one year or less, of at a pace of “approximately $60 billion per month,” starting in mid-October and “at least into the second quarter of next year,” in order to replenish the “excess reserves,” whose dropping levels have been blamed for banks’ refusing to lend to the repo market, thus triggering the recent repo blowout. 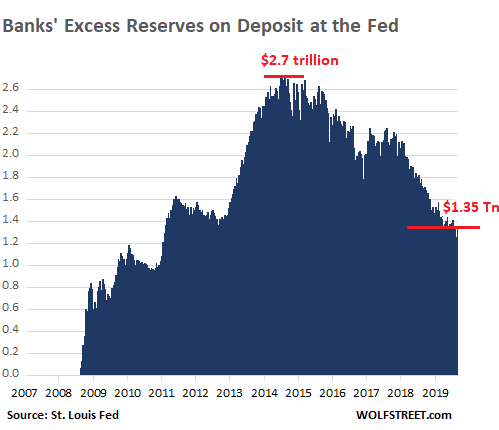 Excess reserves came into being as a result of QE during the Financial Crisis. They represent the amount of cash the banks have on deposit at the Fed beyond the required reserves. They’re liabilities on the Fed’s balance sheet, not assets, and the Fed pays the banks interest on those reserves currently at a rate of 1.8%. These excess reserves have fallen by half since their peak at the end of QE.

Banks would rationally lend these reserves to the repo market if rates make this profitable (if repo rates are higher than 1.8% currently). But that system broke down when repo rates spiked and banks weren’t lending, despite high repo rates that would have allowed banks to make a bigger profit.

Exactly why banks, or why one or two of the biggest banks, refused to lend to the repo market or lend to a few players in the repo market remains subject to speculation.

But the Fed’s new plan is supposed to resolve that problem. The Fed thinks these excess reserves dropped too much and went below the level where they’re sufficient to prevent repo market blowouts. In its announcement this morning, it said it would push up those reserves back to where they’re “at or above the level that prevailed in early September 2019.”

Leading up to the repo blowout, the excess reserves had dropped by $160 billion in four weeks, from $1.42 trillion in mid-August to a low point of $1.26 trillion in mid-September, when the repo market blew out. And the Fed thinks that this level was below where the system can function.

On top of the new-new plan.

And the Fed will continue “at least through January” with its new-new plan, first implemented in mid-September in response to the repo market blowout. These are its repo operations – overnight repos that unwind the next morning, and term repos that unwind when they mature, such as in 6 days or 14 days.

The Fed said today that the pace will remain the same, daily overnight repos of “at least $75 billion” and term repos about twice a week for “at least $35 billion” per operation.

These term repos were 14-day maturities at first but now vary and have shortened. For example, today’s term repo, instead of 14 days, was for 6 days (3 business days, as the bond market is closed on Columbus Day).

These operations have all been undersubscribed every day in October. On the Fed’s balance sheet yesterday, the total assets from its repo operations fell by $2.5 billion from the balance a weak earlier, to $178 billion.

I assume the T-bill purchases under the new-new-new plan to raise the excess reserves will take further pressure off the repo market, and that the Fed’s repo operations – the new-new plan – will be further undersubscribed.

Diving deeper into the ocean of assumptions about the Fed: I assume when there is very low demand or no demand for the Fed’s repo operations that the Fed figures excess reserves have risen enough, and that it will then end these new-new-new plan purchases of T-bills.

The Fed’s repo operations are set to continue “at least through January,” the Fed said in today’s announcement, which would get the repo market through the expected turmoil at year-end, which was quite a spectacle last year, and promised to be a much bigger spectacle this year.

On top of the new plan.

Effect on the yield curve.

From the end of Operation Twist until a few months ago, the Fed has not held any meaningful amounts of T-bills on its balance sheet, having instead focused on long-term securities and MBS to push down long-term interest rates, such as mortgage rates, as a stimulus measure.

But these new plans have a special effect on the Fed’s balance sheet: They will reduce the amount of long-dated securities and MBS the Fed holds; and they will proportionately and in absolute terms increase the amounts of T-bills the Fed holds. In other words, the market will have to absorb more longer-dated securities and more MBS, meaning upward pressure on long-dated yields, and the Fed absorbs more T-bills.

Since Fed Chair Jerome Powell’s initial explanation on Tuesday of the new-new-new plan of only buying T-bills, the 10-year Treasury yield has risen from 1.52% when he was speaking to 1.75% at the moment. And the yield curve has steepened. The Fed hasn’t said this, but clearly, this system is designed also to un-invert the yield curve, and it has taken a step into that direction already.

The repo blow-out — whoever instigated it — comes in real handy. Read… How the Crybabies on Wall Street Try to Force the Fed into QE-4