The repo blow-out — whoever instigated it — comes in real handy.

Fed Chair Jerome Powell’s explanation on Tuesday and the FOMC minutes released yesterday were a bitter disappointment for the Crybabies on Wall Street – the broker-dealers and banks: They’d expected a massive bout of QE, and perhaps some of the players had gleefully contributed to, or even instigated the turmoil in the repo market to make sure they would get that massive bout of QE as the Fed would be forced to calm the waters with QE, the theory went. This QE would include big purchases of long-term securities to push down long-term yields, and drive up the prices of those bonds these Crybabies are holding or have bet on with derivatives.

This is particularly crucial to the “primary dealers” – the 24 US and foreign broker-dealers and banks that are authorized to deal directly with the US Treasury and the New York Fed. They’ve been hoarding Treasury securities with longer maturities. As of October 2, according to the most recent data from the  New York Fed, they hoarded $161 billion, double the $81 billion a year ago – though that has come down from the peak in July of $219 billion: 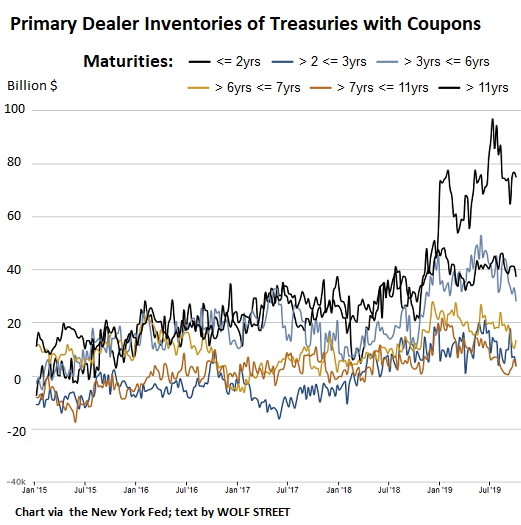 Primary dealers are funding their hoard in the repo market. These funding needs were putting pressures on the repo market, the Fed already said in its minutes for the July meeting, before repo rates totally blew out in mid-September.

But primary dealers could have sold a large part of those securities, if they’d wanted to. Prices were high and yields were low, a sign that there was heavy demand. But the dealers were holding out for even higher prices and even lower yields. And any heavy selling could have pushed up those yields and steepened the yield curve, very unpalatable for folks clamoring for rate cuts.

So these dealers are sitting on a pile of Treasury notes and bonds whose prices they want to rise, and therefore their yields would have to fall. Massive QE, where the Fed buys these types of Treasury securities, would accomplish that.

But that’s exactly what the Fed said it wouldn’t do. Starting with Powell on Tuesday and with the minutes released on Wednesday, the Fed is outlining a plan to buy only Treasury bills.

T-bills are securities with maturities of one year or less, such as a 3-month T-bill. They do not have a coupon. Instead, they’re purchased at a discount from face value and are redeemed at face value. The difference is the yield for the investor.

Dealers have not been hoarding T-bills. As of October 2, they were holding less than $7 billion in T-bills, at the very low end of the three-year range.

So these Crybabies were hoping for real QE with long-term notes and bonds. And all they got was a plan focused on acquiring T-bills, on top of the new plan from a few months ago to replace longer-term Treasury securities and all MBS on the Fed’s balance sheet with a mix that includes T-bills.

Under these plans, any growth of the Fed’s balance sheet would free up longer term Treasury securities that the market would have to absorb. In turn, the Fed would absorb more T-bills.

The bond market was aghast. Treasuries with longer maturities have sold off across the board since Powell spoke on Tuesday, and yields rose. The 10-year yield closed on Thursday at 1.67%, the highest all month, up 15 basis point from about 1.52% on Tuesday at the time Powell was speaking.

This is not what the Crybabies on Wall Street had in mind. They’re now trying to forcefully push the Fed into restarting real QE. And they’re coming up with all kinds of hoary ideas of why the Fed must do it. MarketWatch has gathered up some of them.

The most hilarious idea is that there suddenly aren’t enough short-term T-bills out there for the Fed to buy, and that is why the Fed will have to buy longer-term notes and bonds. But there are $2.4 trillion in T-bills outstanding, and if the price is right, anyone can by them, even the Fed.

“Is that part of the market large enough to deliver the reserve growth [the Fed] wants?” Steve Johnson, senior portfolio manager at SVB Asset Management, told MarketWatch. “Where do they go besides banks for those bills? That’s a big question mark right now.”

Primary dealers hold less than $7 billion of T-bills, but if the Fed’s starts buying them, the primary dealers start buying them in the market to sell to the Fed at a profit. With $2.4 trillion outstanding, it’s not a problem.

“We think the Fed should aim to purchase both bills and short coupons in order to speed the pace of reserve additions,” said Mark Cabana, head of U.S. short rates strategy for Bank of America Merrill Lynch, cited by MarketWatch. He thinks the Fed can only acquire $25 billion a month in T-bills, but that it should buy a whole lot more, a whole lot faster, and that would have to come from longer maturities.

They all want the Fed to “speed the pace” – to use Cabana’s term – of this new QE. It’s never enough, never fast enough, and maturities to be bought are never long enough. These Crybabies cannot wait to get out of this horrible quagmire when bond prices fall as yields rise. Let’s push and kick the Fed into action, the theory goes. They’ve been clamoring for QE all year and have not been getting it. The repo blow-out – whoever instigated it – has now become the latest rallying cry for QE.

And there is this meme circulating out there that the Fed, as Johnson told MarketWatch, “may be erring on the side of over-communicating” that it is not conducting QE – in other words, that the Fed doesn’t actually mean to say what it is saying so clearly and emphatically. And this meme is just another tool to try to wedge the Fed into forceful and real QE. Those Crybabies on Wall Street are just a sight to behold.

I wish I could have sat in that meeting, watching the bewildered faces of Fed officials as they got hourly updates on repo rates blowing out in real time. Read...  The Day When Repo Rates Blew Out: Fed Recounts a Fiasco that Occurred as the FOMC Was Meeting, and How it Reacted