Just how important is China to GM, its Largest Market & Once Biggest Hope for Growth?

General Motors is getting crushed in China, its largest market, and by far the largest auto market in the world. The auto industry overall has been getting hammered by the first downturn in modern China, based on data going back to the 1990s. The downturn started in mid-2018 and continues. So far this year, auto sales in China are down 10% from the same period in 2018. The whole year 2018 was already down 4% from the peak-year 2017. But this decline pales compared to how GM is getting crushed and re-crushed. 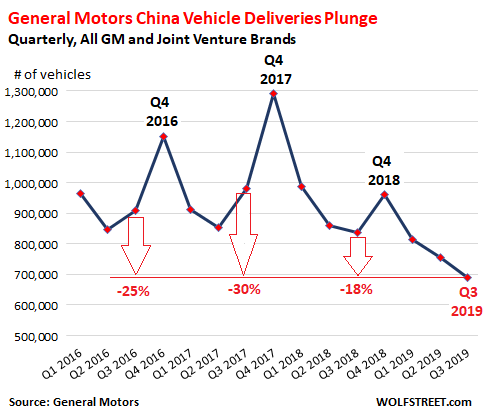 In 2017, China’s and GM China’s record year in auto sales, the future was still enormously bright, and there was still the certainty that the Chinese government would always step in to stimulate the auto market, which it had done famously in 2008 and 2009, causing auto sales in China to soar during the Global Financial Crisis. But that certainty that the government would stimulate the market in mega-ways has now been downgraded to a distant and unfulfilled hope.

Seasonally, the fourth quarter in auto sales is always the strongest in China, and Q4 2017 had been the record quarter for GM when it delivered 1.29 million vehicles.

Just how important is China to GM?

GM’s sales have declined in both markets. But the mild-mannered downtrend in the US is nothing compared to the wild plunge in China. And the difference between the two markets is now shrinking for GM.

Having to partner with a Chinese company, often a state-owned company, and having to transfer technology to that joint venture partner was a required feature in China for foreign automakers if they wanted to access China’s 1.3 billion consumers. This requirement has come under heavy attack by the Trump administration, and the German government is now also lambasting that requirement, and China has started backing off. But that’s likely too late for GM.

GM’s most important partner is SAIC, one of the “Big Four” state-owned Chinese automakers. Their joint venture, SAIC-GM, offers numerous models under the Buick, Chevrolet and Cadillac name plates. All of these vehicles are manufactured in China.

SAIC-GM also produces the Buick Envision compact SUV, which GM imports from China to the US. So far this year, 25,000 Envisions were sold in the US, up 10% from the same period in 2018.

Among the other GM joint ventures of note in China is SAIC-GM-Wuling, of which GM China owns 44%, SAIC 50.1%, and Guangxi Automobile Group (formerly Wuling Motors) 5.9%. The JV produces the Wuling brand mini-trucks and minivans and the Baojun brand passenger vehicles.

Cadillac rises, Everything else plunges

In its press release, GM said that it is going to bring “about 20 new and refreshed models” to market in China. This was touted as a “record.” So, GM is trying to turn the situation around with new models, and that’s good, because sanguinely sitting on your butt while getting drubbed doesn’t help. But all brands except Cadillac took a majestic drubbing in the third quarter:

Nearly all vehicles GM sells in China are manufactured in China. And a big part of GM’s supply chain even for its US production has moved to China after collapsing in the US during the Financial Crisis. GM has design centers in China, along with numerous other joint ventures.

While the US is still the market where GM makes most of its revenues and profits thanks to Americans’ appetite for high-priced pickups and SUVs, China is – or rather was – the market where GM had hoped to obtain most of its growth, after having essentially pulled out of Europe by selling Opel, while the US is a horribly mature and saturated market with no growth in unit sales in 20 years.

But those China growth hopes have gotten crushed. In its second-quarter SEC filing, released in August, GM disclosed that revenues of its JVs in China, measured in US dollars, have plunged 27% in the first half of the year, to $19.1 billion, and that profits of its JVs have plunged 47% to $1.3 billion.

There are two ways to answer the thorny question how much US car prices have risen: One way: the official CPI for new vehicles. The other way: retail prices. Here’s why many workers feel impoverished when they want to buy a new car. Read... Sticker Shock & Thorny Question: How Much Have Car Prices Really Risen over Three Decades?

58 comments for “Carmageddon for General Motors in China: Q3 Sales Collapse 30% from 2 Years Ago”