“I do believe that in North America it is a cyclical downturn”: Cummins COO.

Orders for heavy trucks, after the historic boom in 2018, plunged this year, but they may have finally bottomed out. In October 2019, truck makers in the US received about 22,072 orders for Class-8 trucks, according to preliminary estimates by FTR Transportation Intelligence. While up by about 10,000 orders from the dismal levels in September, and the highest number so far this year, orders were still down 51% from October last year ago, “signifying a subdued beginning to the traditional start of the ordering season,” FTR said: 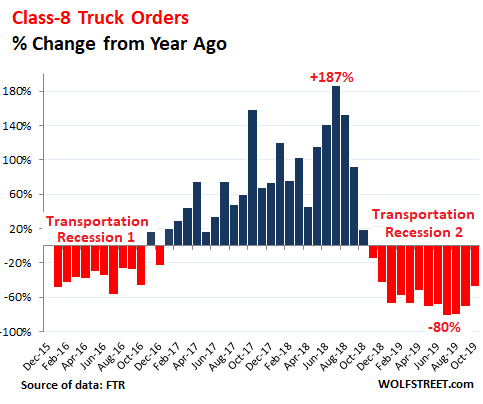 “The order level was boosted by a couple of big fleets placing large orders into 2020, but otherwise smaller orders were placed for the first quarter build,” FTR said in a statement. “Cancellations are expected to remain elevated as OEM’s shake out excess 2019 orders from the backlog.”

These OEMs are Freightliner, the largest truck maker in the US, and Western Star, both divisions of Daimler; Peterbilt and Kenworth, divisions of Paccar [PCAR]; Navistar International [NAV]; and Mack Trucks and Volvo Trucks, divisions of Volvo Group.

The historic boom of Class-8 truck orders that started in late 2017 and roared through most of 2018 was a result of a series of events triggered by all kinds of companies trying to front-run potential tariffs. Companies ordered excessively to dodge the tariffs, and they filled their warehouses, and it triggered a shipment boom. To meet this demand, trucking companies responded by ordering a historic number of trucks.

But this boom began to unwind in late 2018, and then turned into a collapse of orders that lasted through September 2019 when it appeared to have hit bottom. October looked better. But October 2016 looked better too, only to be followed by a very tough year. Orders in October 2019 were the lowest for any October since 2016: 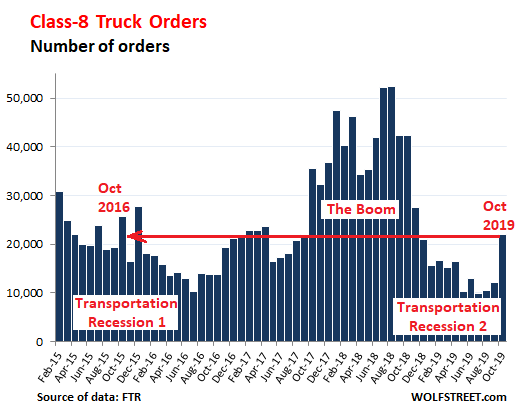 “Orders increased in October as expected; however, caution prevails,” said Don Ake, FTR VP commercial vehicles, in the statement. “The trade and political turmoil are producing a highly uncertain business environment. Fleets are only ordering for their immediate needs. They are not willing to speculate much beyond the first quarter of next year. The OEMs have plenty of open capacity right now, so carriers are willing to approach 2020 a step at a time.”

“Freight growth is flat, as the industrial sector slows, and manufacturing struggles a bit,” Ake added.

The historic boom in orders in 2018 created a historic backlog of truck orders that then allowed the OEMs to continue production near capacity, even as orders have collapsed this year.

Truck makers have floated through most of the collapse in orders on a high note, as they were building out the historic backlog on their books. Paccar, for example, reported that Q3 revenues in the US and Canada rose 16% to $3.5 billion, and unit sales rose 12% to 31,700 trucks.

But that backlog has largely been eaten through, and truck makers are starting to cut production.

Navistar announced layoffs in August in its medium-duty truck division. Freightliner announced layoffs at the beginning of October for two manufacturing plants. Suppliers to the OEMs have also announced layoffs, including Meritor [MTOR] which disclosed at the end of September a “restructuring plan to reduce salaried and hourly headcount” in order “to reduce labor costs in response to an anticipated decline in most global truck and trailer market volumes.”

On October 29, engine-maker Cummins [CMI] cut its revenue forecast and disclosed that sales in its engine business had dropped 11% in the quarter. During the earnings call, CEO Thomas Linebarger, in commenting on the slowdown in the truck manufacturing business globally and in North America, said:

“Maybe what’s surprising to me is it’s broader than I thought. Like we are seeing challenges in India, challenges in China. Even Europe is slowing. We saw North America coming, that was all part of what we expected.”

Cummins COO Livingston Satterthwaite added: “We are definitely seeing freight growth has slowed. We are seeing orders slow and production has got to come down to match the backlog and meet those orders…. I do believe that in North America it is a cyclical downturn.”

Commenting on the engine business, Cummins CFO Mark Smith, said that “in North America, the pickup truck market is the only one that’s been holding out steady and strong through the year.” Cummins builds engines for all kinds of trucks. He was referring to the Cummins 6.7L Turbo Diesel for RAM pickups. And RAM pickups have been hot among consumers – who’re still holding up their end of the bargain.

30 comments for “What Heavy Trucks Are Saying”