The hangover after the tariff-front-run boom last year.

Freight shipments by all modes of transportation – truck, rail, air, and barge – within the US fell 3.4% in September 2019, compared to September last year, according to the Cass Freight Index for Shipments. For the index – which tracks shipment volume of consumer and industrial goods but not of bulk commodities – it was the 10th month in a row of relentless year-over-year declines: 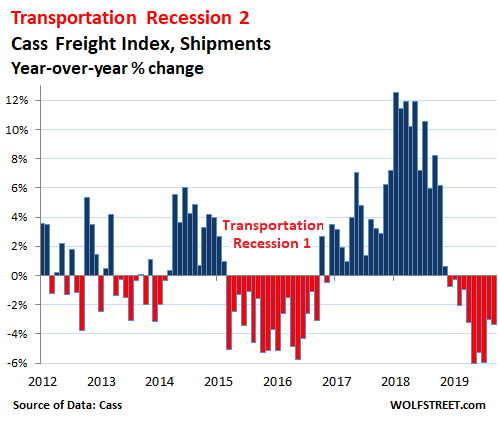 The stacked chart below shows how shipments in 2019 (red line) – though lower than in 2018 (black line) – have remained above all prior years, except for June, when they fell below the pre-2018 record of June 2014 (green line). 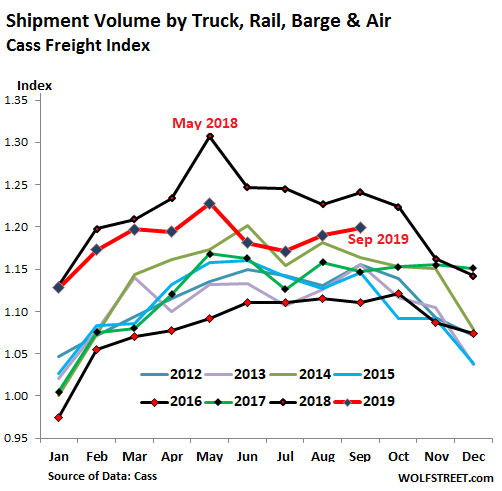 If you squint at the stacked chart just right, you can see that the much sharper-than-seasonal drop-off in November 2018 will make November and December this year and January next year an easier comparison – a sort-of flattening out on a year-over-year basis, but at a lower level.

The Cass Freight Index for shipments is a measure of the goods-based economy. This includes consumer goods; construction materials; products, equipment, and components for manufacturing; supplies and equipment for oil & gas drilling and mining; etc. And this points at the two-track economy at the moment:

Consumers on average – with everyone in one bucket whether they want to or not – went on strike at the end of last year but emerged refreshed in the spring, and they’re working and making money and buying stuff, and powered by hot e-commerce, retail sales rose 4.6% in September year-over-year, according to the Commerce Department. Consumers are doing their part. And these goods have to be shipped.

But the industrial economy has slowed after the surge last year, much of which had been powered by front-running potential and actual tariffs. At the time, companies over-ordered and stuffed their warehouses with goods, and inventories ballooned (all data for August, the latest available):

Railroads took the brunt of the declines. The number of carloads (commodities, motor vehicles, etc.) fell 7.0% year-over-year in September, according to the Association of American Railroads (AAR). Coal carloads, which have been on a sharp down-trend for a long time, fell 8.7% year-over-year. Carloads of grains fell 15.8%; and crushed stone, sand & gravel fell 7.5%.

As a result of declining shipments and freight rates that are ticking down, the total amount that shippers such as retailers, wholesalers, and manufacturers spent on freight, including fuel surcharges, by all modes of transportation fell 4.5%, according to the Cass Freight Index for Expenditures. 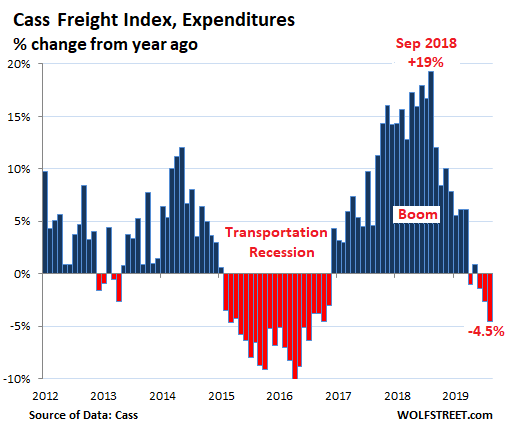 The stacked chart below shows just how much of an outlier 2018 had been, and how early 2019 had been an even bigger outlier that is now getting unwound. The purple line, in third place, was the prior banner year 2014: 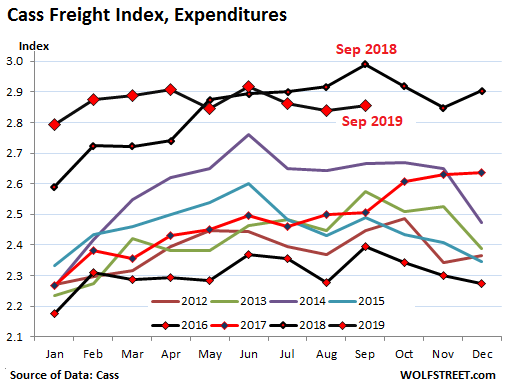 Going forward, the freight industry is confronted with the same duality it has seen in recent months: Consumers are buying stuff at a good clip, and e-commerce is booming, and there is no slowdown in sight at the moment – though consumers have been somewhat lackadaisical about buying new vehicles. But the industrial economy and construction are hobbling along near zero-growth levels, just above it or just below it, depending on how the mood swings.