Even in San Francisco: From a brand-new glitzy zombie mall to innumerable vacant storefronts.

Mall investors have long denied it. But year after year, ecommerce has been eating up brick-and-mortar retail sales, in the third quarter faster than ever, and in the fourth quarter, according to early indications, even faster. Turns out, ecommerce is a structural change that grew out of the arrival of the Internet, has been underway for two decades, and will continue until it has played out.

Sure, malls are not all going to be shuttered overnight. But many of them have already been turned into zombie malls; and others that are located on good locations are being redeveloped into office and apartment buildings with some retail and restaurant space, along with movie theaters, and other entertainment venues.

One of those malls, the Stonestown Galleria in San Francisco, had been anchored by two department stores, Macy’s and Nordstrom, both of which closed (Macy’s closed two out of its three stores in San Francisco). This was a devastating blow for the mall.

But wait. The mall was owned by struggling mall REIT GGP (formerly General Growth Properties) which owned 125 malls. In August 2018, an entity of Brookfield, a giant private equity firm headquartered in Canada, with publicly traded subsidiaries, and an expertise in huge construction and development projects, bought the two-thirds of GGP it didn’t already own for $15 billion. And people thought, aha, the brick-and-mortar meltdown was overblown, and malls are just fine.

Brookfield has developed a taste for buying the most distressed assets: At the same time, also in August 2018, one of its units bought nuclear-reactor manufacturer Westinghouse out of bankruptcy for $4.6 billion.

In terms of buying GGP, I doubt Brookfield’s main purpose was to take a contrarian bullish bet on a beaten-down, long-term-moribund industry, blindly hoping that it would miraculously recover. More likely, it took a bet on the large pieces of land in good locations that Brookfield, with its expertise in large construction projects, could over time redevelop into high-end apartment and office buildings and hotels, dotted with grocery stores, movie theaters, restaurant sites, and other uses.

This is becoming clear at Stonestown. Development projects in San Francisco are complicated, require input from everyone, including neighbors and their dogs, and take forever. But the process has started. Instead of worrying about department stores as anchors, construction has started on a Whole Foods – grocery stores having mostly been spared so far the brutal attack of ecommerce – the 11-screen Regal movie theater, and a Sports Basement. That was the easy part.

The property sits on 40 acres, most of which are parking lots. And housing is planned for much of the space.

“We have been honest with people,” Brookfield senior VP Jack Sylvan told the San Francisco Chronicle. “The way to make a vibrant place is by adding a mix of uses, and that is definitely going to include housing.”

Given the size of the property, it could turn into the second largest housing development project west of Twin Peaks, with thousands of apartments (the largest project, Parkmerced with 5,679 apartments, was approved eight years ago but construction still hasn’t started).

So far, Brookfield has identified $2.5 billion in redevelopment projects on nine of the 125 malls it acquired. These projects include office complexes, hotels, and housing, according to the Wall Street Journal.

In addition, Brookfield has identified $2.6 billion of longer-term projects, such as the residential buildings at Stonestown in San Francisco and new residential towers at the Ala Moana Center mall in Honolulu.

These projects take time and lots of money, but for well-located mall properties, there will be a use, but much of it will be housing, offices, and other uses – not retail.

Under these pressures, new mall projects are getting scrapped.

What would have been one of the largest malls in San Francisco, to be built as part of a huge redevelopment project on a 280-acre site that includes the land where the San Francisco Giants stadium, Candlestick Park, used to be, was scrapped earlier this year by the developer, FivePoint Holdings.

Instead of building the 635,000-square-foot mall at Candlestick Point, it plans to build a 750,000-square-foot office and research facility at the site, which kicks off a new approval process with the City. This is in addition to the 7,200 housing units planned for this 280-acre site, along with a 200-room hotel, and some 300,000 square feet of commercial space.

And then there is the brand-spanking-new glitzy 264,000-square-foot mall on a still gritty but to-be-revitalized stretch of Market Street in San Francisco, the 6X6 (referring to its six floors of retail space and its proximity to 6th Street). Dallas-based developer Cypress Equities completed it in 2017, after having spent $150 million on it, but it never found a single tenant, and the mall remains vacant and closed. 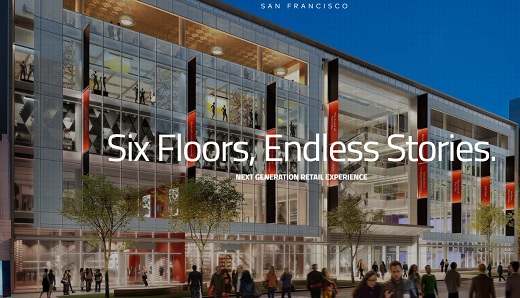 The developer later obtained approval from the City to convert 50,000 square feet to office. And it continued to sit there as glitzy zombie mall.

In August 2019, it was disclosed that biotech real estate developer Alexandria Real Estate Equities and TMG Partners acquired the glitzy zombie mall. The fate remains uncertain. There will likely be some retail and restaurant space in it, in addition to office space, because the City is a real stickler for keeping retail space alive.

And keeping retail space alive quickly became a sticking point at the 263,000-square-foot Macy’s Men’s store near Union square. Macy’s sold the building in late 2016 for $275 million to a partnership between Morgan Stanley and Blatteis & Schnur. They wanted to convert it to an office building. The City wanted to keep the building retail, since it’s in the retail center of the City that forms a big draw for tourists.

And now there appears to be a compromise with the upper floors being converted to office space, and with the lower floors being developed into fancy retail spaces, shops facing the street, upscale restaurants – there are already about 8,000 restaurants in San Francisco! – and art galleries. An 11,000-square-foot roof-top restaurant space will be added. The building remains encased in scaffolding.

For well-located mall properties, there are options. They likely don’t involve the kind of retail that department stores offer. These examples here are properties in a booming expensive city that is still considered a retail mecca by foreign tourists, with plenty of demand for office space and housing. Every one of these conversions requires large amounts of investments and might take years.

They have become such an eyesore and problem – with everyone complaining about them – that the Board of Supervisors voted in March to require landlords to register vacant and abandoned storefronts within 30 days of becoming vacant and pay an annual $711 registration fees; if they fail to do so, they have to pay four times the amount of the registration fee. But so far, no effects are visible, and the vacant storefronts continue to multiply.

Wow, that was fast: In default is a $650 million portion of a $2 billion loan package, signed in 2018. Read…  Brick & Mortar Meltdown Manhattan Style: Lenders Foreclose on Times Square Tower whose Six Retail Floors are 90% Vacant

160 comments for “What Options Do Mall Landlords Have When Brick & Mortar Retail Melts Down on Them?”