Department stores get crushed one by one. 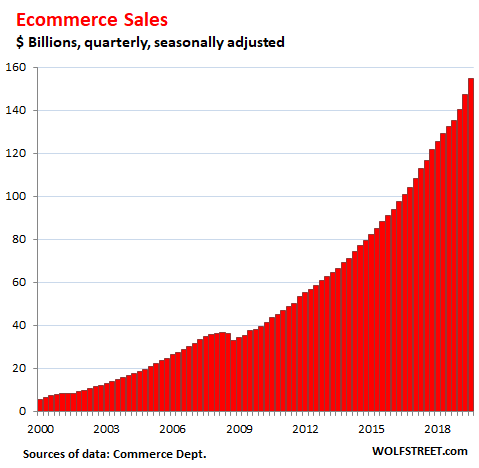 Ecommerce sales include the ecommerce operations of brick-and-mortar retailers, many of which have built thriving online operations: Among the top 10 ecommerce retailers, behind Amazon and eBay, are the online divisions of seven brick-and-mortar retailers, according to eMarketer, in that order: Walmart, Apple, Home Depot, Best Buy, Macy’s, Qurate Retail Group (QVC, HSN, Zulily, Ballard Designs, Frontgate, Garnet Hill, and Grandin Road), Costco. The 10th in the top ten is Wayfair, an ecommerce retailer.

Walmart, after ignoring the threat of Amazon for years, is now throwing everything at it, including numerous acquisitions and building out its own ecommerce brand and fulfillment infrastructure. Despite many costly flops, its ecommerce sales have been soaring, including by 41% year-over-year in Q3.

Walmart will disclose the dollar amounts of its Q3 ecommerce sales in its upcoming 10-Q filing with the SEC. So we don’t know yet the exact amount. But in its 10-Q for the second quarter, Walmart reported ecommerce sales at its Walmart US division of $4.8 billion. So for Q3, given the 41% year-over-year growth, ecommerce sales at Walmart US were over $5 billion. But with Walmart US revenues rising by only $2.7 billion (to $83 billion), most of that growth came from ecommerce, and growth at its brick-and-mortar stores was anemic.

Every retailer that is trying to stay relevant is spending enormous amounts on building out their ecommerce business and fulfillment infrastructure. Walmart is way behind the curve, but catching up. Others weren’t as far behind.

At Nordstrom, ecommerce sales already accounted for 34% of its total sales in Q3. When it reported earnings yesterday, it was held up as the shining exception among the recent batch of retailer malaise-reports that included Home Depot and Macy’s. But even at this shining exception, total revenues in Q3 fell 2%. It also disclosed that its “digital” sales grew 7%. But its brick-and-mortar sales fell 7%.

This is the reality retailers are struggling with: No matter how much they hype their initiatives for their brick-and-mortar stores, the long-term trends are moving against them, and only ecommerce provides hope for growth.

Retailers have to invest heavily and smartly in ecommerce in order to remain relevant and not go the way of Sears, which is rapidly disappearing from the scene following its bankruptcy earlier this year, or the way of Toys ‘R’ Us, which has already disappeared, along with dozens of other major retailers that have been dismembered and buried over the past three years of the brick-and-mortar meltdown. 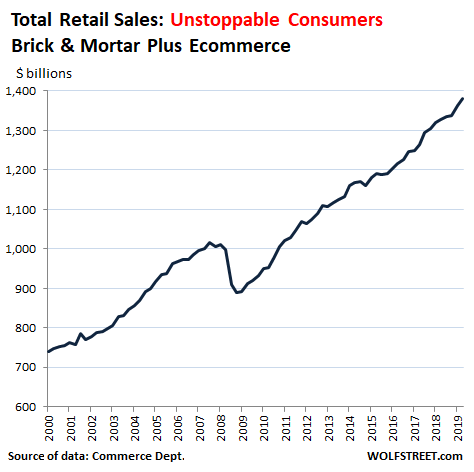 There are huge efforts underway to get Americans to buy groceries online, including at Amazon and Walmart, and those efforts are starting to bear fruit, but it’s a hard slog, and online grocery sales are still only a minuscule portion of total grocery sales. So for now, I still consider them “ecommerce resistant,” though that will change eventually.

Most of the remaining segments of brick-and-mortar stores are getting crushed by ecommerce – those stores that are still around, unlike record stores, which were pushed off the cliff years ago.

Department Stores have been sitting ducks for two decades.

Ecommerce is wiping out department stores one by one. The long-cherished destination for American shoppers is doomed. Sears is just the latest example of a long list of examples. Others will follow.

Sales at brick-and-mortar department stores in Q3 fell 5.7% year-over-year to a new multi-decade low of $33.8 billion (seasonally adjusted). They’ve collapsed by 41% from the peak in Q4 2000 and by 20% from the beginning of the data series in 1992. People who still think that this trend is somehow going to turn around are fooling themselves. This is the brick-and-mortar business Macy’s, Nordstrom, and Sears are in: 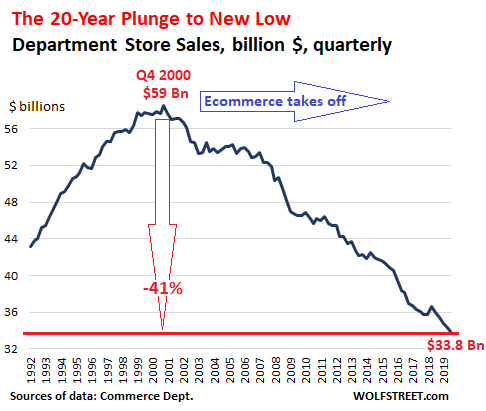 Brick-and-mortar sporting goods stores had been able to defend their stores from online encroachment. But then in 2016, Sports Authority was liquidated, and many of their customers switched to online purchases when their stores closed (not seasonally adjusted data; to eliminate the wild seasonality, I used a four-quarter moving average): 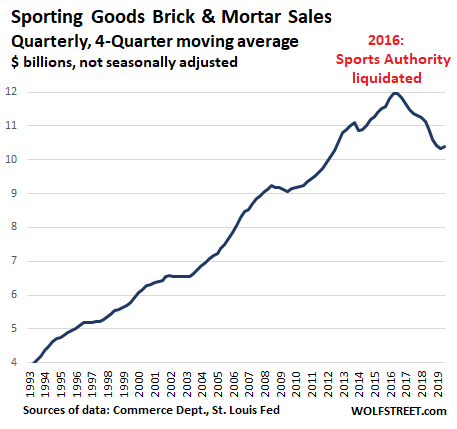 The brick-and-mortar stores that are most impacted by ecommerce are what I call the “mall stores” (with sample bankrupt chains in parentheses):

Sales at these “mall stores” fell by 2% year-over-year to $155 billion in Q3, where they’d first been in 2005. Over the same period, ecommerce sales have multiplied from $21 billion to $155 billion. That they’re now equal is an astounding metric for people who have long denied that ecommerce will ever amount to more than a niche thingy: 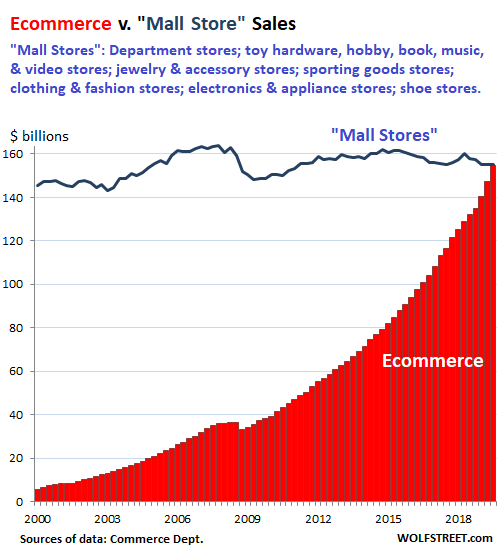 Obviously, ecommerce sales are broader and encompass more categories than mall stores. But this comparison summarizes the trend.

As has been the case over the past 20 years, more categories will be drawn into ecommerce, including sales at grocery stores. This is a biggie, the second largest category in retail, after sales at motor-vehicle and parts dealers. That’s why Amazon is trying to muscle into it, and why Walmart is defending its turf.

Americans still hesitate to buy fresh produce online, but most of the aisles in a grocery store are stuffed with things that come in packages that can easily be ordered online, ranging from toilet paper to orange juice.

Ecommerce will continue to expand its reach. Each time a consumer gets disappointed at a physical store due to lack of inventory, lousy service, traffic, parking issues, or whatever, and each time a store they frequented closes, and they figure out that they can buy exactly what they want online, ecommerce finds a new convert, product by product. That conversion process isn’t tapering off – on the contrary, as shown by the $20.4 billion year-over-year jump in Q3 ecommerce sales, the biggest jump in history.

Amazon’s China team “saw increasing patterns of fraud, counterfeits and unsafe products.” But US consumers have no clue where the sellers are and where the products came from. Read…  Murky Business of Chinese Merchandise on Amazon’s US Site