Including billionaires who thought they’d picked the bottom in 2016.

Chesapeake has been burning cash ever since it started fracking. To feed its cash-burn machine, it has borrowed large amounts and has been buckling under its debt for years, selling assets to raise cash and keep drilling for another day. But its debt is still nearly $10 billion. Its shares [CHK] closed on Friday at 59 cents.

On November 5, in an SEC filing, it warned of its own demise unless oil and gas prices surge into the sky asap: “If continued depressed prices persist, combined with the scheduled reductions in the leverage ratio covenant, our ability to comply with the leverage ratio covenant during the next 12 months will be adversely affected which raises substantial doubt about our ability to continue as a going concern.”

In early 2016, during Phase 1 of the oil bust — which had started in mid-2014 — Chesapeake had already used the threat of bankruptcy to push its creditors into accepting a debt restructuring. At the time, it was the second largest natural gas producer in the US.

The debt restructuring reduced its debt burden somewhat and pushed maturities out, which then allowed it to borrow new money from new investors with a series of bond sales. This coincided with the Wall Street floodgates reopening to the oil and gas sector, when PE firms, hedge funds, and distressed-debt funds piled billions of dollars into the sector, and many of the oil and gas drillers were able to raise more cash to burn.

Chesapeake’s series of bond sales that it then undertook included, in January 2018, $1.25 billion of senior unsecured convertible notes with a coupon of 5.5%, due in September 2026. It issued those bonds at a discount, but by July 2018, a few months before Phase 2 of the oil bust set in, the bonds were trading at 103 cents on the dollar. On Friday, the last trade was at 45 cents on the dollar, giving these bonds a yield of over 21% (via TRACE, FINRA’s Trade Reporting and Compliance Engine): 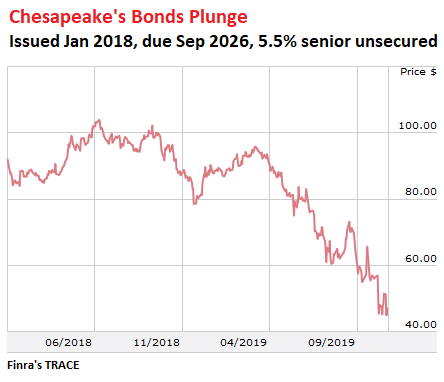 Other exploration and production (E&P) companies have seen their shares get crushed as reality began to re-set in.

Whiting Petroleum shares [WLL] had spiked to $370 in August 2014, when the oil bust was setting in. By the trough of Phase 1 of the oil bust, in February 2016, its shares had plunged to $14. Then new money started flowing into the sector, and its shares rallied to $55 by August last year. Then Phase 2 of the oil bust set in, and after some disastrous earnings reports, its shares closed on Friday at $5.34. 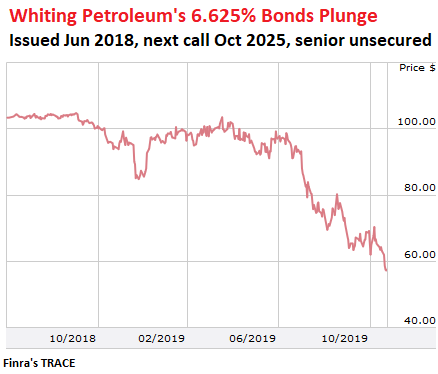 The S&P U.S. High Yield Corporate Distressed Bond Index tracks bonds that trade at a yield that is at least 10 percentage points higher than the equivalent Treasury yield (“Option Adjusted Spread” of 1,000 basis points). Chesapeake’s bond illustrated above, trading at 21%, and Whiting’s bond trading at 18.375% qualify for this index with flying colors. Of the 182 constituents in the index, many are energy bonds. Since November 2018, the index has plunged by 28%: 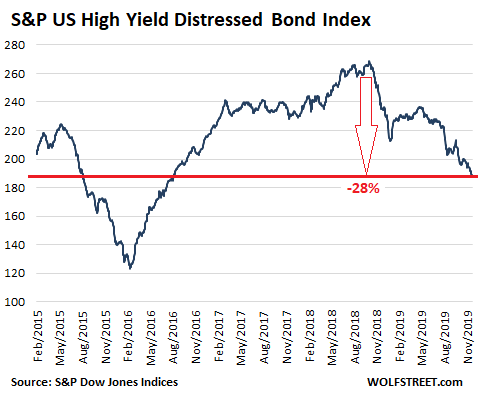 Now there are stories circulating of how billionaires, who in 2016 believed the hype that the fracking bust was over, have gotten tangled up and lost tons of money on their bets. Bloomberg recounts one such story, of the brothers Farris and Dan Wilks in Texas.

In 2002, they’d turned their stone-mason expertise into Frac Tech Holdings. Chesapeake, the fracking pioneer with the collapsed shares and bonds above, acquired a 25.8% state in 2006. They became billionaires in 2011 when they sold the remainder of the company to an investor group led by Temasek Holdings, which is owned by the Government of Singapore, for $3.5 billion. They then bought large swaths of land in five states, becoming the top property owners in Montana and Idaho.

However, not all of their wealth went into real estate. In 2016, the brothers started investing heavily in the fracking industry through their investment company, Wilks Brothers LLC, including oil and gas drillers in the Permian Basin and suppliers, such as frac sand supplier Carbo Ceramics, of which the brothers are the second largest investors.

Back in 2015, Carob Ceramics [CRR] still traded at over $40 a share. By October 2016, shares had dropped into the $6-range. Then the Permian boom started, and in early 2018, shares were trading at $12. But then the long hard decline continued, as demand for frac sand vanished as drillers were running out of cash and cut back on their drilling activity, and on Friday, shares closed at 41 cents.

Bloomberg notes: “Eight of the 10 biggest holdings in a portfolio spanning more than 50 investments have dropped since June 2018, when they were worth almost $1 billion. In a filing last week, they reported stakes in just seven entities worth a total of only $35.7 million. The combined value of those remaining holdings plunged by $171.2 million, or 88%, since they were initially disclosed.”

The shale oil and gas business has turned the US first into the largest gas producer in the world, and then this year also into the largest crude oil producer in the world. It’s a huge business, with lots of high-paying jobs, not only in the oil field but in technology sectors, including software and hardware, manufacturing of heavy equipment, transportation, materials, and of course construction – ranging from pipelines and housing in the oil field to now partially empty office towers in Houston where, according to JLL, the office vacancy rate in Q3 climbed to an astounding 24%.

Shale oil and gas drilling is awful for the land, water, and the broader environment. But so are all other methods of supplying power and fuel to an economy, including mountain-top coal mining, burning coal, hydro (which destroys entire canyons and rivers), nuclear power (nuclear waste, Fukushima, Chernobyl), even wind and solar power (the “fuel” is free and clean but producing and placing the equipment creates its own problems). When it comes to power and fuel, there are only compromises, some worse than others, and fracking is one of them.

And it’s brutal on investors at prevailing prices. The industry has been cash-flow negative from get-go. The high prices of oil and gas the industry needs to be cash-flow positive are being prevented by prolific shale oil and gas production. Executive compensation packages have been self-designed to reward richly any increases in production, hence no-matter-what increases in production. And investors who believed the industry’s ceaseless hype are now grappling with reality – that their money was drilled into the ground and is gone.

The fear that central banks with low or negative interest rates will be helpless in face of the next economic crisis made it into the Fed’s Financial Stability Report for the first time. Read… Fear of “Reversal Rates” Sets in, Says the Fed