Store liquidations in 2019 have blown past the full-year total of 2018.

The phenomenon of the Brick-and-Mortar Meltdown is proceeding with relentless momentum, trailing in its wake store closings, job losses, bankruptcies, and liquidations. Just this week:

A’Gaci, a young women’s fashion retailer based in Texas, filed for Chapter 11 bankruptcy protection on Thursday, for the second time, after having filed for the first time in January 2018. This time, it will liquidate. All its remaining 54 stores in seven states and Puerto Rico will be closed – the “bulk” of them by the end of this month. Bankrupt retailers are notoriously difficult to restructure and turn into success stories.

The company blamed the “challenging business environment,” particularly the “shift in consumer preferences away from shopping at brick and mortar stores to online retail channels.” And it blamed “hurricanes that impacted its most profitable stores” along with a botched “implementation of an inventory management system.”

On Wednesday, Walgreens Boots Alliance said in an SEC filing that it would close “approximately 200” stores in the US, accounting for about 3% of the company’s footprint. This move is part of its “Transformational Cost Management Program,” which indicates that there are more such moves coming in the future.

Also on Wednesday, this one in the “Dead Meat Walking” category: TransformCo, which Eddy Lampert had set up to buy certain Sears assets out of bankruptcy earlier this year, including 425 stores, announced that it would shutter 21 Sears stores and five Kmart stores, citing among other things a “generally weak retail environment.” And it said it “cannot rule out additional store closures in the near term.” So more store liquidations to come just in time before the holiday shopping season.

This phrase, “generally weak retail environment,” that TransformCo used is of course nonsense. Just about everything Lampert’s TransformCo says publicly can be considered nonsense. US retail sales are growing at a decent clip, up 3.3% in July compared to July last year, powered by the relentless boom in e-commerce, though brick-and-mortar department stores, clothing stores, and many other types of stores that populate malls are getting crushed. The weakness is in brick-and-mortar stores, not retail in general. And Sears, once the biggest mail-order house, totally and forever missed the train of e-commerce: 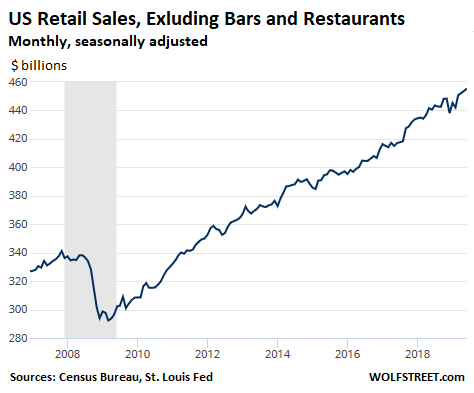 The problem for Lampert’s stores is two-fold: One, Lampert, a hedge-fund guy, is clueless about retail; and that two, his #1 priority, as hedge fund guy, is to strip the stores clean one more time – which he has done for years before the bankruptcy, and which led to the bankruptcy, and for which he, Treasury Secretary Mnuchin, and other “culpable insiders” got sued by the legal team that is picking through the remnants of Sears Holdings, alleging that these “culpable insiders” committed a series of massive “fraudulent transfers.”

On Tuesday, luxury department store Barneys of New York filed for Chapter 11 bankruptcy. Its restructuring plan calls for closing 15 of its 22 stores. Liquidation sales at those stores have already started.

Following the back-to-back-bankruptcy-filings strategy to total liquidation, it intends to keep five flagship stores open for the second filing – two in Manhattan, one in Beverly Hills, one in San Francisco, and one in Boston. Rent alone is a store killer in those locations. If the plan manages to emerge from bankruptcy court, and the company doesn’t get liquidated this time around, it is doomed to file a second and final time for bankruptcy and be done with entirely.

These beaten-up brick-and-mortar department stores have zero chance against online retail. They’ve been sitting ducks since peak-sales in the year 2000, though they spent 15 of those 19 years denying it: 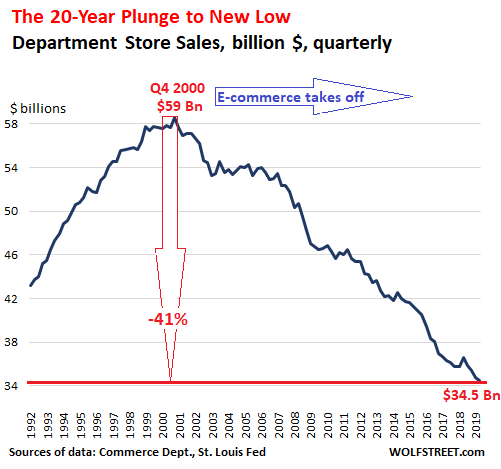 The only chance these retailers have is building up a vibrant e-commerce organization, including a fulfillment operation that will let them survive as mostly an online retailer.

But they should have started 15 years ago, when they still had the resources. Now weakened, over-indebted, and bleeding cash, they cannot even contemplate investing the massive resources it takes to build up their e-commerce fulfillment infrastructure and catch up with everyone that has left them in the dust. So their online efforts are feeble and confused, and they’re doomed to be eaten alive by e-commerce powerhouses such as Amazon, Walmart, Macy’s, and others, and by manufacturers selling direct on platforms such as Amazon or eBay, or any of the others, and by the many thousands of smaller operations, including mom-and-pop operations, that have established a presence on the internet.

“Legacy retailers” – that’s what Barney’s et al. are now called; retailers left over from a prior era, to be mostly wiped out in the not too distant future.

2019 has been record-setting brutal already

This year through July, about 7,500 store closings have been announced, up 20% from the full-year total in 2018 (5,864), according to estimates by Coresight Research, cited by Trepp, which provides analysis on Commercial Mortgage Backed Securities, such as those backed by mall properties.

The full-year total in 2019 is on track to reach 12,000, which would blow past by 50% the record established in 2017, the terrible brick-and-mortar-meltdown year when 8,139 stores were scheduled for liquidations,

In terms of the square-footage of liquidated stores, the record was set in 2018, the year of big-box store liquidations. This included Sears, Kmart, Bon-Ton, and Toys “R” Us stores, resulting in 155 million square feet of retail space that had been vacated by liquidations, according to estimates by Costar, cited by Trepp.

This year so far, a lot more stores are being liquidated, but mostly smaller stores, such as the 2,700 Payless Shoesource stores, with less square footage per store. So in terms of square-footage, the 2018 record will hard to beat.

Despite the shakeout and store closings that have been going on for years, still-healthy retailers will continue to close stores, including big-box stores, to reduce their brick-and-mortar footprint as they have become more reliant on e-commerce. And there is still a long list of retailers on the bankruptcy and liquidation watch list, from J.C. Penney on down. Sooner or later, they will succumb. J.C. Penney’s shares closed at 60 cents on Friday.

In 2013, I called Goldman Sachs a “snake-oil salesman” for underwriting a $1-billion J.C. Penney stock offering. Investors got wiped out. And now its longer-dated bonds, including a 100-year bond, have collapsed. Read… I’m in Awe of How Long Zombies Like J.C. Penney Keep Getting New Money to Burn. But Bankruptcy Beckons