This “crack cocaine for CFOs” was also extensively used by Carillion until it collapsed.

The world’s seventh largest construction and services company (by sales), with subsidiaries around the globe, Grupo ACS, has revealed it is making extensive use of reverse factoring, a controversial financing technique that played a key role in the collapse of UK construction giant Carillion. In a conference call with analysts, ACS chairman, Florentino Perez, said the firm has been rolling out factoring “across the group,” to “more efficiently manage cash flows and match revenues and costs over the course of the year.”

The admission by ACS that it is using reverse factoring of payables across its vast global empire has spooked investors, given the malign role this supply chain financing tool played in the collapse of Carillion. As Fitch ratings wrote in a report last year that reverse factoring essentially served as a “debt loophole,” enabling Carillion to hide the true scale of its growing debt load. But not indefinitely. In January 2018, it collapsed in almost free-fall fashion under the sheer weight of that debt.

The global operations of ACS, a Spanish company, are significantly larger than Carillion. Its decision to disclose its use of factoring was probably prompted by recent allegations from Hong Kong research group GMT about the rampant use of reverse factoring of payables and other “accounting shenanigans” at ACS’ Australian subsidiary, CIMIC, which is majority owned by ACS’s Germany subsidiary, Hochtief.

In a report released on April 30, GMT Research said that CIMIC, which builds many of Australia’s biggest infrastructure projects, was using “factoring agreements” with banks and financial institutions to create the illusion of cash flow, reduce the appearance of debt, and lower the appearance of its leverage ratios.

CIMIC initially responded to the accusations by saying its accounts are fully audited, fully compliant, and accurate. But that didn’t seem to work. So, in its half yearly report in mid-July it admitted that its factoring level was close to $2 billion, though it did not differentiate between “reverse factoring” and classic “factoring.” Like most companies, CIMIC lumps the two together on its balance sheet under “trade and other payables.”

In July, the company also reported weaker half-year results than expected, including significantly lower operating cash flow. The news triggered a brutal sell off of its stock, which tumbled 19% in one day’s trading. The shares are now at a three-year low, having plunged 29% since mid-July and 35% since GMT first published the report: 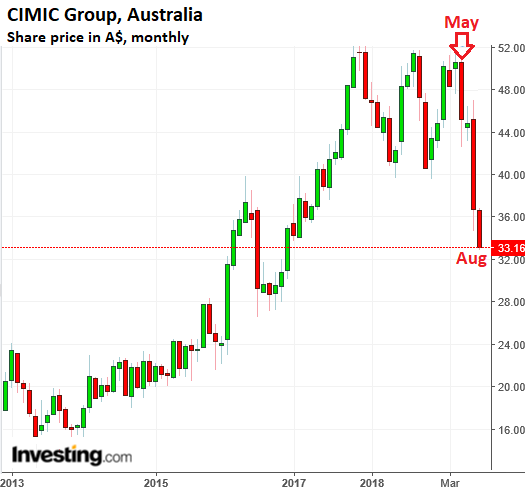 Investors are clearly worried, and probably with good reason. According to Australia Financial Review, “CIMIC has developed a reputation for poor transparency” since its takeover by ACS in 2014, “refusing to answer questions from the media and refusing interviews, even when it reports financial results.”

Here’s how reverse factoring works: a company hires a financial intermediary, such as a bank or a specialist firm to pay a supplier promptly (e.g. 15 days after invoicing), in return for the supplier accepting a small discount. The company repays the intermediary at a later date, often on more extended terms than it had with the supplier.

Both sides feel like they have benefited: the supplier gets quick access to the cash it’s owed, albeit at the price of forgoing a small piece of that cash, while the buyer is able to borrow money without having to disclose it as debt, meaning that it can extend its payment terms and expand its borrowing, while maintaining its leverage ratios.

Investors and auditors are often left none the wiser, since it’s entirely up to the company whether it chooses to classify this new debt as a loan or as trades payable. Most choose the latter. It is virtually impossible to discern by looking at a company’s trade payables whether reverse factoring of payables is being included unless the company expressly says so. Most choose not to.

Reverse factoring has been in practice for decades but has hugely expanded in recent years, although no one really knows by how much due to the lack of disclosure by the firms that use it. As cash flows get squeezed and debts are piling up, the temptation has grown to use reverse factoring to improve the outward appearance of cash flows and reduce the outward appearance of “debt” and their leverage ratios. Banks and specialized financial institutions in the supply chain finance industry are more than happy to meet that demand.

Getting addicted can be dangerous. When a company gets into financial distress, its bank simply cancels the reverse factoring program, leaving the company stranded and having to scratch together enough funding to pay down its accounts payable to the terms agreed to with suppliers. For a company that is already in dire financial straits and whose last major source of cash flow has just disappeared, it’s an impossible task — hence the reason why a 200-year old company like Carillion collapsed so quickly and with so little warning. By Nick Corbishley, for WOLF STREET.

The bitter irony: As Draghi’s term is about to end, investor expectations plunge to where they’d been when he made his “whatever it takes” speech in 2012. Read…  Investor Sentiment Goes to Heck After Draghi’s Easing Promise