And rideshare revenue is stagnating.

Uber’s losses have been legendary for years, ever since they were being leaked to the public while it was still a privately held company. But this takes the cake. Uber reported this evening that it had lost $5.24 billion in the quarter through June 30. The thing is, Uber reported revenues of only $3.2 billion. In other words, its net loss exceeded revenue by $2 billion. That takes some doing.

Its $5.24 billion loss came on top of its $878 million loss in the first quarter. Combined, during the first half of 2019, Uber lost $6.25 billion. Total revenue for the two quarters was $6.3 billion. The chart of Uber’s “Loss from operations” – which does not include interest expense ($368 million in the first half) and “other income (expense),” such as last year’s gain from the sale of its stakes in Grab and Yandex – shows the annual totals from 2014 through 2018 and first-half total for 2019: 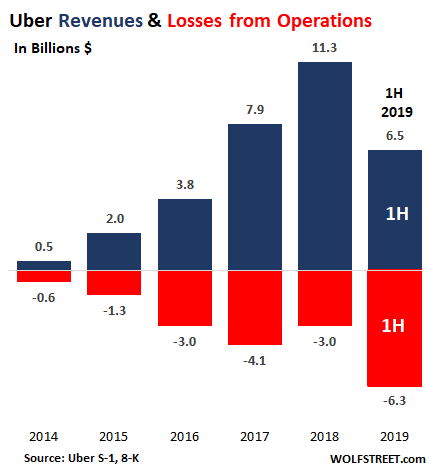 You see, this phenomenon of well-established global companies with thousands of employees generating as much or more in losses than they have in revenues causes my old-school thinking to short-circuit.

Uber has been around for a decade, and it has already burned through many billions of dollars in investor money to get where it is today, and there is still no functioning business model in sight.

Naturally, the company does not want you to look at its business this way. So, its report clearly points out what to look at and how to look at it, and what to purposefully ignore. It says so right at the top of its press release:

“Our platform strategy continues to deliver strong results, with Trips up 35% and Gross Bookings [not including what drivers get paid] up 37% in constant currency, compared to the second quarter of last year,”

OK, despite all this hoopla and red-hot growth of these metrics, actual revenues increased only 14%.

“In July, the Uber platform reached over 100 million Monthly Active Platform Consumers for the first time, as we become a more and more integral part of everyday life in cities around the world.”

Sure, but who pays for it? The check is split two ways: Users pay part of it and investors pay the other part, digging deeply into their pockets to subsidize every ride.

And another thing: 14% topline growth is not a high-growth company. And that 14% was way down from prior growth rates. For example, in Q2 2018, revenues increased by 52%.

What’s worse, revenue growth in its core business – its ride-hailing service – edged up only 2% to $2.3 billion. The technical term for this is stagnation.

To escape this ride-hailing stagnation, Uber got into an e-bike service (Jump), Uber Freight, and the latest red-hot fad, food delivery. Revenues of “Other Bets” rose 175% to $195 million. And revenues at Uber Eats jumped 72% to $595 million. All of this stuff is losing money hand-over-fist.

That $5.24 billion in losses includes the $300 million cost of its “driver appreciation award” – those dang drivers again – related to its IPO. And it included the $3.9 billion in costs of its stock-based compensation plans related to the IPO.

In terms of cash burn from operations – “net cash used in operating activities” – the company reported that it burned $1.64 billion in the first half.

But Uber is not going to run out of money any time soon. It has already extracted so much from investors, including during the IPO, that it is still swimming in nearly $12 billion in cash, cash equivalents, and restricted cash. Even Uber will need some time to burn it all.

No one apparently – least of all the executives at Uber – have any idea how to get to profitability, or at least get to a self-sustaining business model. The hope was for years that Uber would replace those peskily expensive drivers with driverless cars.

The autonomous cars would be capital intensive, sure, but capital is cheap or free (as the funds raised during the IPO), and even underpaid humans are too costly for Uber. And since there are no drivers, there are no problems with drivers. This plan looked great – until one of Uber’s self-driving prototypes (with a human onboard) killed a pedestrian.

Instead of showing a clear and short path to profitability, CEO Dara Khosrowshahi dazzled us with vagueness during the conference call: Ride-hailing, he said, “should turn out to be a spectacular business long term.”

The business is already spectacular, in terms of its losses.

And “long-term” includes the hopes — that have been pushed out further and further — that autonomous vehicles will finally make it far enough to where they can replace those expensive human drivers, at a reasonable cost and without mowing down too many pedestrians. Meanwhile, losses pile up. And rideshare revenues stagnate.

But rideshare investors have been bedazzled by the promise of who knows what all, and are eager to fund these losses year after year without end in sight.