Bitter irony: As Draghi’s term is about to end, investor expectations plunge to where they’d been when he made his “whatever it takes” speech in 2012.

The Sentix economic index, a gauge of investor sentiment in the Euro Area, fell 7.9 points in August 2019 to minus 13.7, its lowest level since October 2014. The index has been on a downward spiral since January 2018 but in recent months the trend line has sharply steepened.

The index of investor confidence is meant to serve as a barometer of the general mood of people and institutions who are invested in bonds, shares, options and other financial instruments. It is run by the Frankfurt-based boutique investment firm Sentix and is based on a regular survey of investors from over 20 countries. It is less about the real economy than it is about the so-called “animal spirits” — the greed and euphoria, gloom and despondence, and fear and outright panic — of the investment community at any given moment.

And right now, those animal spirits, judging by the latest performance of the index, are subdued and dejected. The two basic measures of the index — investors’ opinion about the current state of the economy and how they expect things to be in six months’ time — both plunged to multiyear lows in August.

On the current state of the Euro Area economy, investor sentiment sank 9.2 points, to its lowest level since January 2015. The pace of deterioration “is increasing rapidly”, said Patrick Hussy, managing director at Sentix, adding that there’s no sign, as yet, of “the central banks being able to slow the trend”.

This is despite the fact that the ECB recently revamped its interest rate guidance and said it was preparing for yet more policy easing, including opening the door to a further rate cut and more bond purchases. It was the biggest gift Draghi has offered the markets since formally putting an end to the ECB’s quantitative easing program in December 2018. But since making the offer, on July 25, stock markets across Europe, rather than celebrating the news, have fallen sharply. 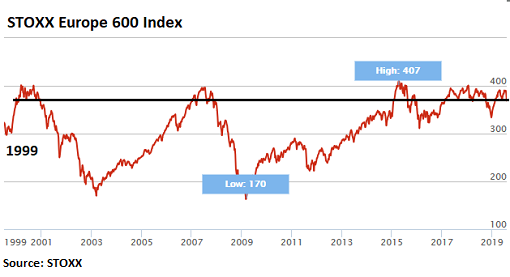 “Measures announced by central banks have not turned economic expectations around,” Hussy says. In fact, the investors surveyed by Sentix are even more worried about what the near-term future holds than the present, as six-month expectations for the Euro Area fell by 7 points to -20 points, the lowest value since August 2012, when the region was in the deep, dark throes of the sovereign debt crisis.

It is perhaps the ultimate of ironies that just as Mario Draghi’s eight-year term of office is about to draw to a close, market expectations among investors have plunged to the exact point they were at when Draghi felt compelled to make his “whatever it takes” speech. Despite all the trillions of euros frittered away since then on the ECB’s quantitative easing program as well as the market distorting effects and financial repression of the ECB’s negative-interest rate policy, investor sentiment in the Eurozone is now back to where it was eight years ago.

In some places, it’s apparently even worse. The investment sentiment index for Germany, for instance, crashed to minus 13.7 points in August, its lowest level since August 2009, when Germany, and the rest of the global economy, was grappling with the Financial Crisis. Market expectations also slumped from minus 16 points in July to minus 21.5 points in August, a low not seen since July 2012.

Investors in Germany are clearly worried about the current state of affairs as well as what may lie in store for the German economy — with growth slowing, manufacturing output falling, global car sales declining — German enterprises are heavily focused on the global auto industry — a disorderly Brexit quite possibly approaching, the hunt for yield becoming an almost impossible quest, and stocks sliding.

But if Draghi’s suggestion of yet more monetary easing and even more negative interest rates with which to punish savers and pensioners and distort markets just a little bit more, at a time when the markets are already awash in liquidity, isn’t enough to placate them, what will? Directly buying stocks, as the chief investment officer for the world’s biggest money manager, BlackRock, recently suggested? Whatever.

Eight years of “whatever it takes” helped to blow bubbles in some asset classes and sharply lowered the cost of borrowing for European corporations and debt-sinner economies, to the point that Italy’s government now gets paid to issue debt with maturities of up to two years. But it has done precious little for the real economy. By Nick Corbishley, for WOLF STREET.