Spain’s Big Five banks (already down from the Big Six) could soon be four.

The ECB’s NIRP forever policy is crushing Eurozone banks’ ability to turn a profit, warned the CEO of Bankia, José Sevilla, on Monday. “It is clear that the current rate scenario is hurting the profitability of the banking business,” he said. “We think low rates are good and perhaps even desirable. But the same cannot be said of negative interest rates since they destroy banks’ profitability equation. Sustained over time — and we have been negative for five or six years now — they hinder and penalize the profitability of Spanish and European banks.”

In February last year, the formerly bailed out lender launched an ambitious three-year plan (2018-2020) that included an earnings target of €1.3 billion for the third year. By this Monday, that plan was already dashed after the bank unveiled half-year profits that were down 22% year-over-year, prompting Sevilla to admit that the lender will not come even close to achieving its €1.3 billion target for 2020.

Over the last decade, as rates have gone from low to zero, to below zero, the shares of Spanish and European banks have been crushed, re-crushed and, for good measure, re-crushed again. Over the twelve years since May 2007, when Europe’s seemingly interminable banking crisis began, the Stoxx 600 bank index has plunged 75%, and is now back where it first had been in October 1995: 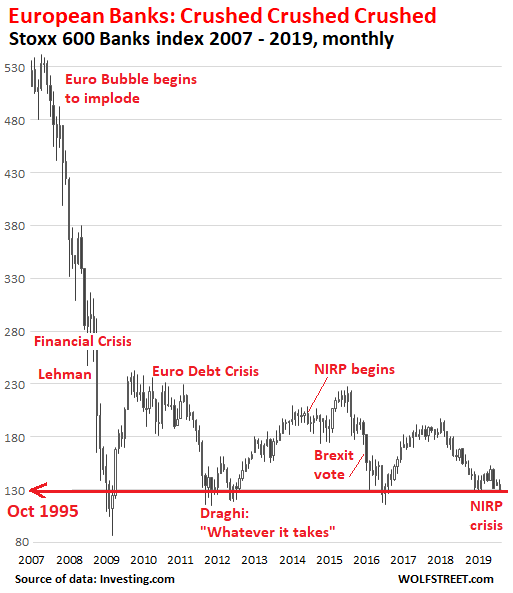 There are plenty of reasons for this spectacular decline, including the 2008 Financial Crisis, the Euro sovereign debt crisis that quickly followed, and the huge piles of non-performing loans that both of these crises left festering on many banks’ balance sheets. There have also been other aggravating factors such as Brexit and Italy’s ongoing banking crisis, which have further decimated investor confidence in the sector.

But a source of pain for European banks is the ECB’s negative interest rate policy (NIRP), which squeezes the interest margins they are able to earn. Despite all the ECB’s hype, NIRP was never meant to boost the real economy or make banks healthier. Its goal was to boost bond prices and thereby bring yields down, which lowers the costs of borrowing for debt-sinner countries. It’s worked beautifully: now, even Italy, with its 132% debt-to-GDP ratio, struggling banking sector, and recalcitrant government, is able to borrow for free with maturities of up to essentially years.

But there is a high price to pay. And that price is being paid not just by Europe’s legions of forsaken savers, depositors, and yield-hungry pension funds, and future retirees, but also by many banks.

In Spain, the shares of three of the big five banks have fallen by 10% or more since last Thursday, when Draghi telegraphed the further loosening of ECB monetary policy. Bankia’s shares have fallen 13%, to €1.76. Five years ago, they were worth €6 a piece. At the beginning of 2018, when European banking shares were staging a brief recovery, the bank had a total market cap of €11.5 billion. Today, it’s worth just €5.5 billion, a mere fraction of the €24 billion bailout it received in 2012.

Spain’s third and fifth biggest lenders, CaixaBank SA and Banco de Sabadell SA, have also seen their shares slump since announcing results last week that fell short of analysts’ estimates. Both banks cut the outlook for their core lending businesses and reduced their forecast net interest income — a measure of earnings on loans minus deposit costs — sending CaixaBank’s shares to their lowest level in three years and Sabadell’s to a historic low of 79 cents. In the last two weeks alone, Sabadell has lost almost 20% of its market cap and is down over half since Jan 2018.

The irony is that Sabadell, on the surface at least, is having a much better year than last. The huge self-inflicted IT problems at its UK subsidiary, TSB, are apparently largely behind it, after having cost hundreds of millions of euros to put right. Last Friday, Sabadell reported first-half net income of €532 million, a 340% increase on last year. Yet its shares have responded by plunging every day since, for four main reasons:

The worse things get for Sabadell, the more investors are reminded of the collapse of Banco Popular in 2016 and its shotgun acquisition by Banco Santander, in which shareholders lost everything. Already, rumors are swirling about the possibility of merging Sabadell with Bankia, an operation that would spawn Spain’s second biggest bank by domestic assets. But just as happened with the creation of Bankia in 2010 from the bedraggled remains of seven semi- or fully defunct savings banks, the risk to taxpayers is likely to be huge. By Nick Corbishley, for WOLF STREET.