Just when European banks need to inspire confidence more than ever.

European bank stocks continue to get hammered near multi-decade lows by a slew of problems, including the ECB’s monetary policies, particularly its negative-interest-rate policy (NIRP), festering nonperforming loans, and a well-deserved lack of confidence by investors. This was just exacerbated by a scathing new report from the European Court of Auditors (ECA) highlighting a litany of problems and shortcomings with the European Banking Authority’s latest stress test. Among other things, the test ignored some of the most common factors that cause a bank to fail, excluded many of Europe’s most fragile banks, and used simulations that were a lot more benign than the last financial crisis. 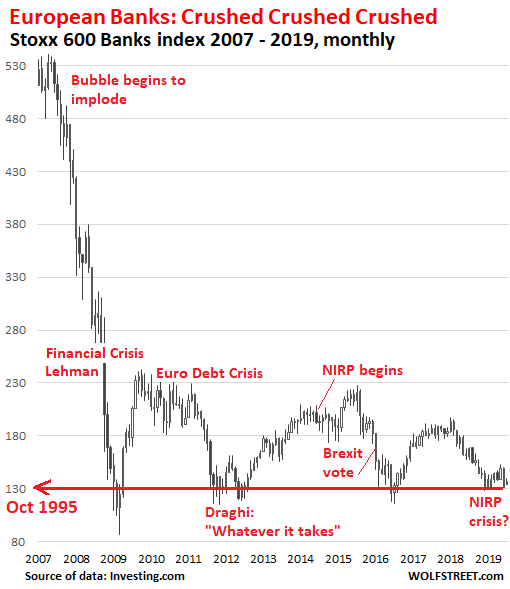 Banking stress tests are supposed to gauge the resilience of a banking system by imposing a hypothetical shock — or “adverse stress scenario” — on a large share of the system’s banks. The problem in Europe is that the European Banking Authority’s stress tests have tended to ignore, rather than identify, many of the worst stress points in the banking system, which is probably why many of the Continent’s worst banking failures, including Bankia BFA, Dexia and Banco Popular, have happened shortly after the banks in question had passed a stress test.

Unlike its counterparts in the UK, the US and Japan, the European Banking Authority (EBA) does not itself calculate the impacts on banks of the adverse scenario; it leaves that up to the banks themselves. It does not even corroborate the information provided or conduct on-site inspections.

This is just one of the many problems the Court of Auditors has identified with Europe’s latest stress test. Here are the other main ones:

1. Some of the riskiest banks were excluded from the test. The number of participating banks has consistently fallen since the first round of stress tests. In 2011, 90 banks in 21 countries participated. By 2018 the number had shrunk to 48 banks in 15 (out of 28) countries. Some of the banks that have fallen off the radar are among the most at risk, including lenders that:

2. The adverse scenario did not even contemplate some of the most important systemic threats facing Europe’s banking sector. A financial stress test is only as good as the scenarios on which it is based. In its latest test the scenario cooked up by the EBA not only failed to reflect the risks posed by a likely future reality, it didn’t even reflect the risks posed by the current one.

In its latest stress test, the EBA tested banks against an economic downturn rather than a shock stemming primarily from failures in the financial system, even though it was this kind of shock that triggered the last major crisis. In fact, it “did not even use an event or a risk within the EU” as a trigger for the adverse scenario. “Nor was consideration given to an event or a risk from within the banking sector,” despite the myriad systemic risks (nonperforming loans, struggling Italian lenders, Deutsche Bank, …) that continue to linger there.

This begs the question: how is it possible to gauge whether European banks are better equipped than ten years ago to withstand a severe stress if the adverse scenario is a lot less severe than the last crisis?

4. Banks’ calculations remain a black box to the EBA. In limiting its role to broadly coordinating stress-test activities, the EBA “makes no genuine efforts to ensure reliability and comparability” of the results produced by the participating banks, many of which have grown so big, complex and opaque that it’s virtually impossible to form an accurate impression of what’s really happening on and off their books.

The EBA did not conduct any on-site inspections to verify the data provided by the participating banks. Nor did it take steps to ensure the relevant “competent authority” (either the ECB or the respective national central bank) was carrying out rigorous checks on the data provided by the banks. In fact, to handle the entire work load of the 2018 stress test exercise, the EBA appointed “around seven” full-time employees.

In light of all these glaring procedural flaws, oversights and staffing constraints, perhaps it’s no surprise that the EBA’s stress tests have failed so spectacularly to restore trust in Europe’s broken banks, as perfectly demonstrated by the never-ending downward spiral of their share prices. While some central banks may claim that the results of the last test demonstrated the resilience of the banks they supervise, investors are clearly having none of it. By Nick Corbishley, for WOLF STREET.

$30 trillion of assets globally are held by open-ended funds similar to the funds that just ran around. Read… Liquidity Crisis at Woodford Equity Fund Is Symptomatic of Systemic Problem, Bank of England Warns