The benefit of NIRP: There’s hell to pay – even the ECB admits it.

European bank shares – which have been getting crushed and re-crushed for 12 years – are getting re-crushed again. On Friday, the Stoxx 600 Banks index, which covers major European banks, including our hero Deutsche Bank, dropped to an intraday low of 130.5 and closed at 131.2, thereby revisiting the dismal depth of December 24, 2018 (130.8).

European banks did not soar on the first trading day after Christmas, unlike other stocks. Instead they fell further and hit their multi-year low on December 27 (129). The index is down 21.5% from a year ago and 33% from January 2018: 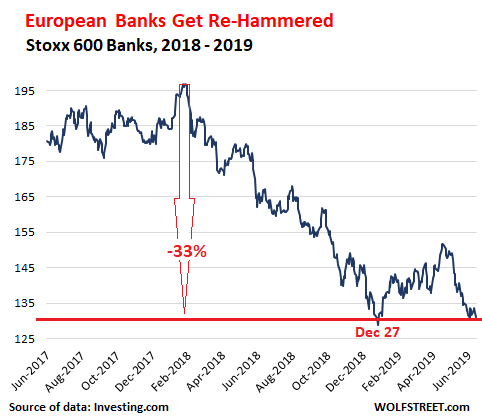 The notable thing about European bank stocks is just how brutally they’ve gotten crushed and re-crushed since May 2007, when, after a blistering bubble run-up, the Stoxx 600 bank index topped out at 534, having quadrupled in the 12 years from October 1995, during the euro bubble when only the sky was still the limit.

Over the twelve years since May 2007, the index has plunged 75%, and is now back where it first had been in October 1995. A confluence of factors keeps banging up these bank stocks, including:

So, given these events, that 33% drop from January 2018 in the above chart is a minuscule dip in the long-term collapse-scenario going back to 2007.  Buy and hold, indeed. Back to the level first seen in October 1995: 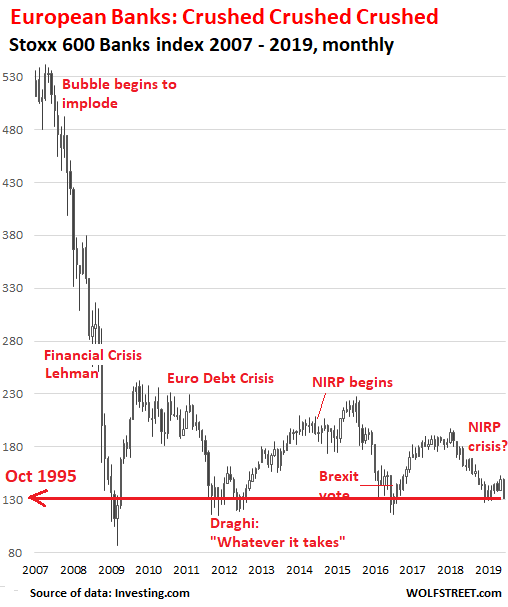 Part of the problem for European banks is NIRP, which was never designed to boost the real economy or make banks healthier so that they could support a vibrant economy. It was designed to boost bond prices and thereby bring yields down, which lowers the costs of borrowing for debt-sinner countries such as Italy, and allows them to borrow for free, which even Italy’s government can do with maturities of up to one year. But there is a price to pay.

The ECB released a paper in August 2018 where it admits that NIRP could cause a financial crisis because it’s terrible for many banks. This is the chilling abstract of the paper:

We show that negative policy rates aﬀect the supply of bank credit in a novel way. Banks are reluctant to pass on negative rates to depositors, which increases the funding cost of high-deposit banks, and reduces their net worth, relative to low-deposit banks.

As a consequence, the introduction of negative policy rates by the European Central Bank in mid-2014 leads to more risk-taking and less lending by euro-area banks with greater reliance on deposit funding. Our results suggest that negative rates are less accommodative, and could pose a risk to ﬁnancial stability, if lending is done by high-deposit banks.

European banks have many other problems, including non-performing loans that after many years of jabbering about them still haven’t been cleaned up sufficiently, and that are now getting a new influx of non-performing loans. Italian banks are king of the hill in that department.

Several of the Italian banks have collapsed over the past few years and were resolved or bailed out, but the problems appear to have just been spread around rather than solved, and the index for Italian banks scampers from one hell to another. The FTSE Italia All Share Bank index fell 19% over the past two months and has plunged 58% since the Italian banking crisis has resurfaced in mid-2015: 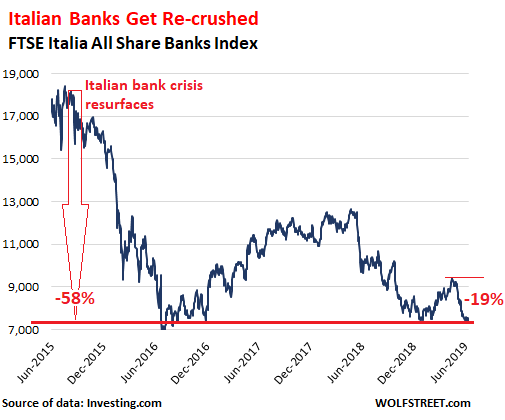 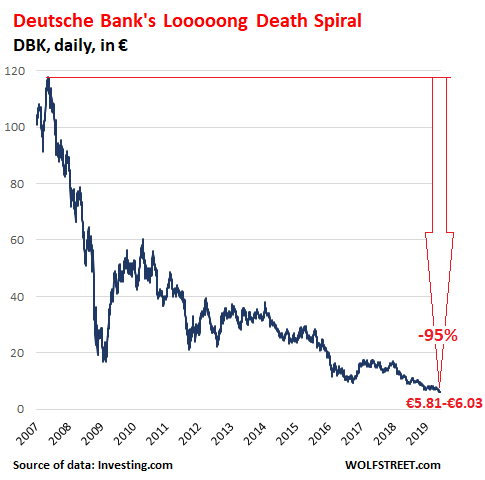 One thing is clear: Deutsche Bank will not be allowed to collapse in a messy way. It’s too big, and it would take down the German economy with it. It will be rescued in some way, but it is likely that any rescue will further destroy current shareholders and holders of junior bonds, particularly holders of bonds designed to be bailed in under such conditions, such as the contingent convertible (Co-Co) bonds that, when push comes to shove and regulatory capital falls below certain levels, can be converted into equity or can just be canceled. They’re now trading at 86 cents on the euro, pricing in some probability that it might get ugly for them.

The rate cuts for 2019 are a pipe-dream: Goldman Sachs and Deutsche Bank. Read…  “The Market is Almost Always Wrong About What the Fed Will Do”: Chart