My couch, jeans, car, PC, sheets, and phone weigh in on globalization and the internet.

Retail sales, not including sales at restaurants and bars, in May rose 3.1% from a year earlier, according to the Commerce Department this morning. That’s not exactly spectacular growth, but it’s OK-ish. Since 2013, year-over-year retail sales growth has ranged between 1.0% and 6.5%. But how is retail-sales growth doing if adjusted for inflation? And suddenly, we descend to the murky spot where my life intersects the data.

Inflation as measured by the Consumer Price Index (CPI) rose 1.8% in May, compared to a year ago. So, just take retail-sales growth and subtract CPI growth – like 3.1% minus 1.8% — to get “real” (inflation adjusted) retail-sales growth? Nope. And here is why.

Retail sales are sales of goods, such as cars, food, appliances, clothes, jewelry, tools, home furnishings, electronics, and the like. Retail sales do not include sales of services.

But services are the biggies. They include healthcare, financial services such as paying your financial advisor or bank fees, rent, getting your hair cut, education, insurance, the electricity bill, the phone bill, video gaming, movies, streaming anything, cloud services, etc. Services account for 69% of consumer spending (here’s my breakdown of current consumer income and spending).

Goods account for the other 31% of consumer spending. This spending in goods falls into two categories, durable goods (at least you hope), such as cars, tools, and jewelry (33% of goods sales) and nondurable goods such as gasoline, food, and clothing (67% of goods sales).

The thing is: All have very – and I mean stunningly – different rates of inflation.

Inflation in services is hot and persistent. 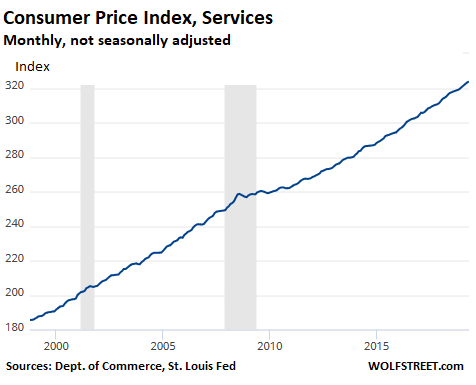 In 1982, I bought my first new couch set (couch and love seat). After days of shopping, I ended up buying at Dillard’s. They had to order it. It took a couple of months to arrive. It was made in the US. Nice cloth. Good looking. I paid $1,200 for it, before sales tax. I remember it because it was a big chunk of money for me at the time, and when I wrote the check, thereby cleaning out my bank account, it was an existential experience.

Two years ago, “we” (having gotten married years earlier) bought the third couch set in my life, after spending an hour browsing on the internet and two minutes ordering it. The couch and love seat came three weeks later, “minor assembly required” (the legs … make sure you know how to use a power screwdriver). It was made overseas, gorgeous black leather, beautiful design. After two years of use, it shows no signs of wear and tear. We paid $1,081 for the set, sales tax not included. Shipping was free.

This is the thing about goods inflation: Globalization, the corporate search for cheap labor that we all complain about, efficiencies in the supply chain, manufacturing, and transportation, etc., and relentless global competition, including via the internet, have brought the cost of some goods down.

Then there is this: The kind of laptop you can buy today for $800 would have been a supercomputer in 1982 that would have cost many millions of dollars. The performance of electronics has constantly improved in leaps and bounds, and prices on a performance-basis have plunged.

I bought my first PC in 1984. It was made by TeleVideo, a California company that later died. It was based on the Intel 8088 chip, came with two floppy drives, no hard drive, and 640 kilobytes of RAM, the most available. I paid nearly $4,000 for it, funded by a three-year loan from my credit union. This thing turned into a boat anchor in no time.

Then there is this: The car you bought in 1982 likely had drum brakes in the rear, no antilock brakes, no airbags, etc. Power windows and locks or cruise control were options you had to pay for. It had no designed crumple zones, no side-impact door beams, etc. The six-cylinder engine was a dog. It had a three-speed automatic transmission. And after 100,000 miles of driving, the car had lost nearly all its value.

Now, our car is 13 years old, has 130,000 miles on it, looks great, runs perfectly, has required only minor maintenance, and has the safety and convenience features available in 2006. And it still has a book value of a few thousand bucks. Cars have advanced since 2006 in leaps and bounds, and have gotten more expensive, but you’re getting a lot more too, such as a silky-smooth eight-speed automatic transmission.

Auto manufacturing is one of the prime examples where automation, globalization of the entire supply chain, innovations in materials, manufacturing, and design, etc. have contributed to some amazing cost savings.

But the problem for the pocketbook is this: They’re not building the 1982 models anymore. They’re now building the 2020 models. And in terms of what you get, they’re not in the same ballpark.

These are examples of different versions of durable goods deflation.

Durable goods deflation is the norm in a modern globalized economy, where the internet makes comparison shopping a breeze, eliminates entire layers of middlemen, and where global competition forces manufacturers to improve the product while bringing down production costs or die (see TeleVideo).

Hence the incessant search for cheap labor, but also for innovation in materials and design, for efficiencies in automation, supply chains, transportation, etc. This has had the effect of reducing the costs of making and selling the goods, captured by the CPI for durable goods: 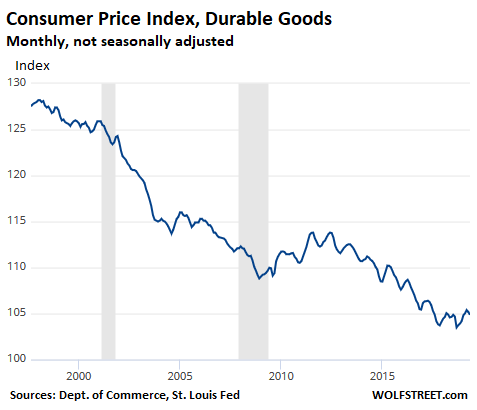 The above chart shows that overall, there has been mild deflation in durable goods for the past 20 years, with the dollar gaining about 22% in purchasing power, but not nearly enough to make up for the large amount of loss of purchasing power in services.

Nondurable goods are a mixed bag.

In 2017, we bought the best set of cotton sheets we’ve ever bought. We got it online, from the manufacturer in India via Amazon for $79.99 (4-piece, king), free shipping. The prior time we’d bought cotton sheets (also made in India) at the store, we’d paid about $250.

The internet and globalization have crushed prices of clothing, sheets, shoes, and the like. They have crushed old distribution channels, middlemen, and local retailers by going around them.

I just googled: 501 levi’s lowest prices. And this is what came up: 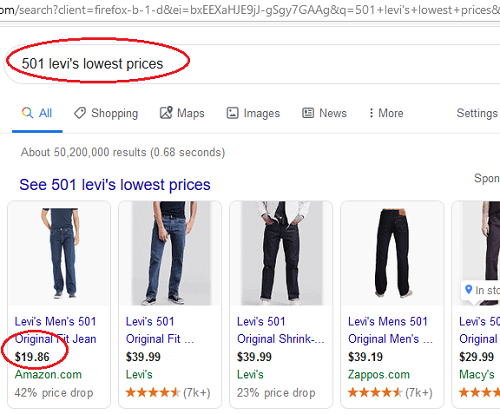 Then I switched browsers and used Bing to search for Levi’s 505, and I had to play Amazon against Macy’s to get the price down, and after a few searches, I got this: 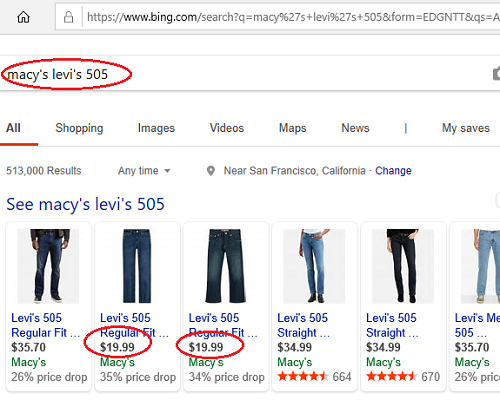 $19.86 or $19.99 – as pictured – is about what I paid for a pair of Levi’s in college in the 1970s. But if I walk into a store here in San Francisco to buy a pair, if I can even find my size, I’m likely going to pay $49.95 or more. In this crazy world of variable pricing, where your browsing history determines what prices you’re offered, how do you even calculate inflation?

But this is precisely what crushed prices of clothing. And this is precisely why companies search for the lowest manufacturing costs, even if it involves child labor and lethal working conditions in Bangladesh. Outside of few brief flareups in the media, consumers don’t care enough about that. What they care about is price, and maybe quality. And companies are forced by competition to comply, because the lowest-cost producer (not necessarily lowest-price seller) survives.

And overall, as you’ve known all along, this index is heading up, but in a volatile manner, with many ups and downs. With regards to nondurable goods, the dollar lost 35% of its purchasing power since 1999: 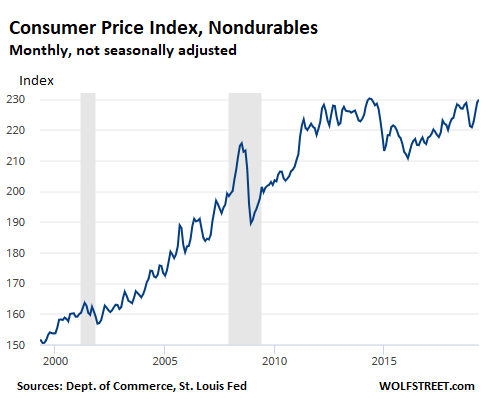 Everyone has their own examples of goods whose prices fell or skyrocketed. And what is an improvement to some – such as a smartphone over a rotary-dial phone, or cars with driver-assist features, back-up cameras, internet connectivity, and 10-speed automatics – is a bane for others.

But we can no longer buy a new car that is the same as a 1982 model. It would be a lot cheaper today than it was back then, but it’s not available. By now, it’s hard to buy a car that is not connected to the internet; and in a few years, it will be impossible.

For me, that a piece of equipment spies on me for the benefit of the corporations behind it is not a benefit. On the contrary. But more and more, I’m forced to pay for it, whether I want to or not. I cannot get the functionality of a smartphone without being spied on. Soon, I cannot buy a new car that is not connected to the internet.

But all this is part of the calculations of inflation. It’s murky, full of examples and counter-examples, and contradictions, and theories. There are geographical differences. Gasoline is a lot more expensive in California than in Texas, but health insurance is cheaper (personal experience). Cars are priced similarly everywhere, but prices may be more negotiable in some areas. Rents can vary by a factor of three or four across the country, declining in some cities, and surging in others. And all this gets mixed into a single national average figure that makes no sense to anyone – but that so much depends on.

Ecommerce is an existential threat to Walmart, and it’s furiously trying to get on top of it, whatever the cost may be. Read...  Walmart’s Desperate $3.3 Billion Acquisition of Jet.com Fails. But it Now Discloses its US Online Sales, and They’re Big

109 comments for “My Perspective on the Murk of Official Retail-Sales Inflation, with Some Surprising Illustrations”