The economy is in a “very good place,” says Trump’s man at the Fed. And the Fed’s favorite inflation measure ticks up.

The Fed’s message has been that it may consider cutting rates if the economy deteriorates, or if inflation falls further, but the economy is currently in a “very good place,” it says. And consumer spending, 70% of the economy, is growing nicely instead of deteriorating, and the Fed’s favorite measure of inflation has just ticked up. But don’t tell Wall Street.

Consumer spending on goods and services in April, as tracked by the Personal Consumption Expenditures data released this morning by the Bureau of Economic Analysis, rose 4.3% compared to April last year, to a seasonally adjusted annual rate of $14.39 trillion. This represents about 70% of the $20.5 trillion US economy. And that’s why everyone keeps their eyes riveted on consumers, whose sole job it is to consume, or else. This increase was right in the range since the Great Recession, not the red-hottest growth rate in the history of mankind, but decent: 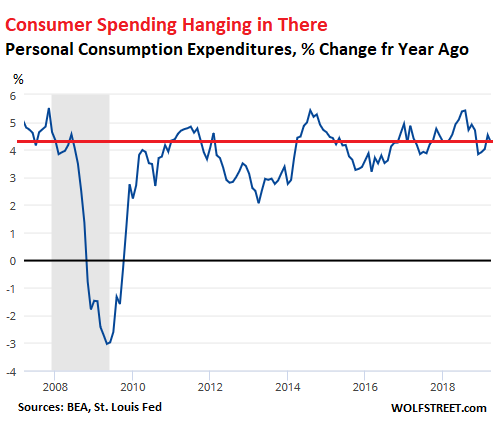 Of this $14.39 trillion that consumers spent, $9.96 trillion was spent on services, which is why the service sector is so crucial to the economy. $4.43 trillion was spent on goods ($1.47 trillion on durable goods, and $2.96 trillion on non-durable goods). In addition, consumers forked over $368 billion in interest. All these are “seasonally adjusted annual rates” – meaning if consumers go at April’s pace for the whole year, these would be the totals for the year.

Adjusted for inflation, Real Personal Consumption Expenditures on goods and services rose 2.7% from April last year. This too was right in the range since the Great Recession: 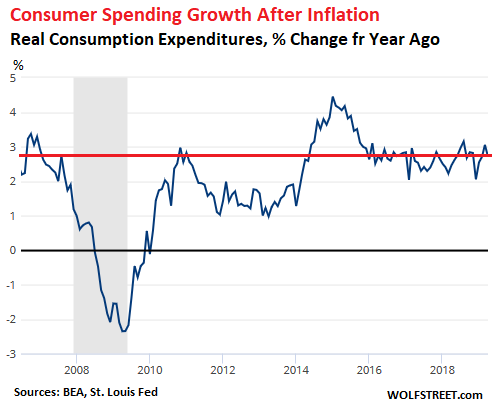 So how did consumers get this much moolah?

Personal Income rose 3.9% from a year ago to a record $18.1 trillion seasonally adjusted annual rate in April. Personal income includes wages; supplements to wages such as employer contributions to pension funds and insurance; rental income; farm income; interest and dividend income; government social benefits such as social security, unemployment insurance, or VA benefits; and the like. More details in a moment.

Adjusted for inflation, Real personal income rose 2.4% from April last year, right in line with the past couple of years: 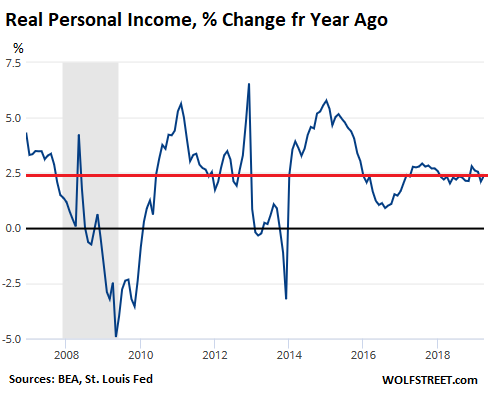 Among the factors that contribute to growth in personal income and spending are population growth (around 0.8% a year) to nearly 329 million, as of this report, job growth (up 1.8% over the past 12 months), and growth in various forms of income.

Income from “wages and salaries” in this report rose 3.6% year-over-year to a record seasonally adjusted annual rate of $9.07 trillion. As high as this is, it accounts for only half of total personal income of $18.1 trillion.

Among the other forms of personal income: Interest income rose 1.6% year-over-year to $1.6 trillion, and dividend income rose 4.0% to $1.17 trillion.

The table below shows the categories of personal income from the BEA’s report for the first four months of 2019. All amounts in billion dollars, at seasonally adjusted annual rates: 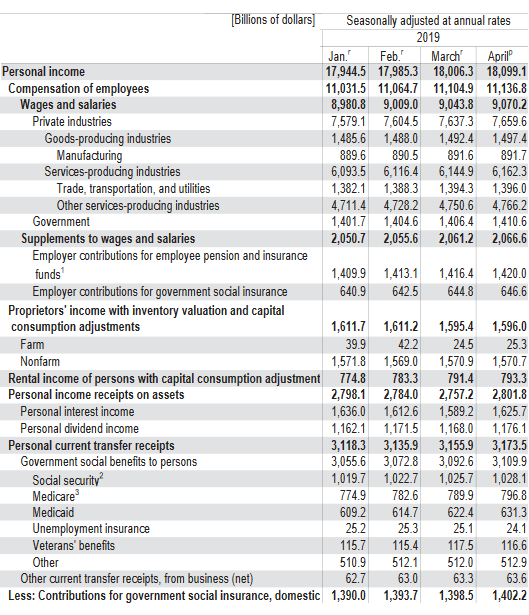 Disposable income is what’s left over after the government gets through with personal income. So this is personal income minus personal taxes and other contributions for government social insurance, such as contributions to Social Security, Medicare, unemployment insurance, and the like. Disposable income rose 3.8% from April last year, to a record $15.96 trillion seasonally adjusted annual rate.

Adjusted for inflation, real disposable income rose 2.2%, also in the middle of the range: 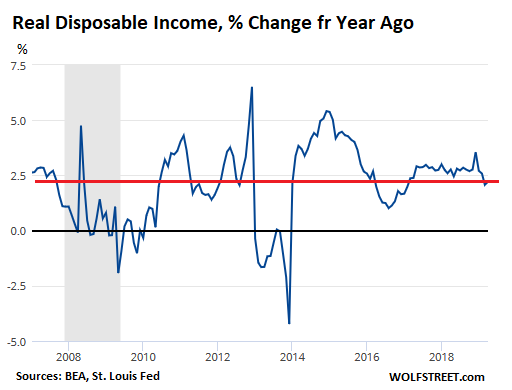 Consumers are making more money, and they’re spending most of it to prop up the economy, and they’re saving some of it too. In other words, American consumers as a whole are doing their job.

In the same report this morning, the Commerce Department said that the Fed’s favorite inflation measure, the PCE price index without food and energy, or “core PCE,” rose 1.6% for the 12-month period, up from an increase of 1.5% in March. While this remains below the Fed’s target of 2.0%, it’s going in the right direction for the Fed (and the wrong direction for consumers).

The “Trimmed Mean PCE Inflation Rate” which Fed Chair Jerome Powell mentioned to show that the dip in inflation was “transitory,” and which eliminates the outliers, rose to 2.03%, on par with the peaks in July 2018, January 2017, and just below the recent high in January 2012 (2.10%).

And consumers are high with excitement. The University of Michigan said this morning that its consumer sentiment index for May rose to 100, from 97.2 in April. This level of 100 is near the very top of the range over the past two decades. You have to go back to the years of the Dotcom Bubble to find consumers consistently more excited.

Consumer confidence can be shaken, and protracted trade-war rhetoric, a 50% stock market crash, a big bout of inflation that moves things out of reach, or other events could shake that consumer confidence. But in the past, we have seen that even with shaken confidence, consumers still scurry around, spending what they make, or more than they make, no problem, because American consumers are a hardy folk.

Meanwhile (A), Wall Street is going nuts with rate-cut speculations, trying to outdo each other in order to throw fuel into the rate-cut flames. Barclays just came out predicting three rate cuts this year, totaling 75 basis points, starting in September… desperately talking its book.

Meanwhile (B), even the biggest Fed “doves” are coming out to say, wait a minute… the economy is in a “very good place,” and it would have to deteriorate and inflation would have to drop before it’s time to consider cutting rates.

Minneapolis Fed President Neel Kashkari was the latest. He chimed in today on Bloomberg TV, saying that it’s too early to cut rates. Low inflation and the escalating trade war are a concern, he said. “Either of those could be cause for changing the path of monetary policy,” he said. But he wasn’t “quite there yet,” he said. “I take a lot of comfort from the fact that the job market continues to be strong.”

Yesterday it was Fed Vice Chair Richard Clarida – Trump’s man at the Fed – who said that the economy is in a “very good place,” and the economic data would have to reveal a significant risk of a sharper slowdown than the slowdown the Fed already expects before the Fed would consider cutting rates.

So interesting to see the growing disconnect between even the “doves” on the Fed who insist that now it not the time to cut rates, and Wall Street, which is clamoring for three rate cuts this year. Meanwhile, American consumers, who are in charge of propping up the economy, rather than just talking about it, are doing what they do best, working hard and spending their hard-earned money.

One of them is wrong. Watch out for it to snap in an ugly manner. Read…  OK, I Get it, Markets Have Gone Nuts: Junk-Bonds Are in Party Mood, Treasuries Clamor for Doom & Rate Cuts