This peculiar creature of an inverted yield curve.

On Thursday, the US Treasury yield curve sagged further in the middle, producing an ever more beautiful middle-age sag, so to speak, that first started taking shape late last year. 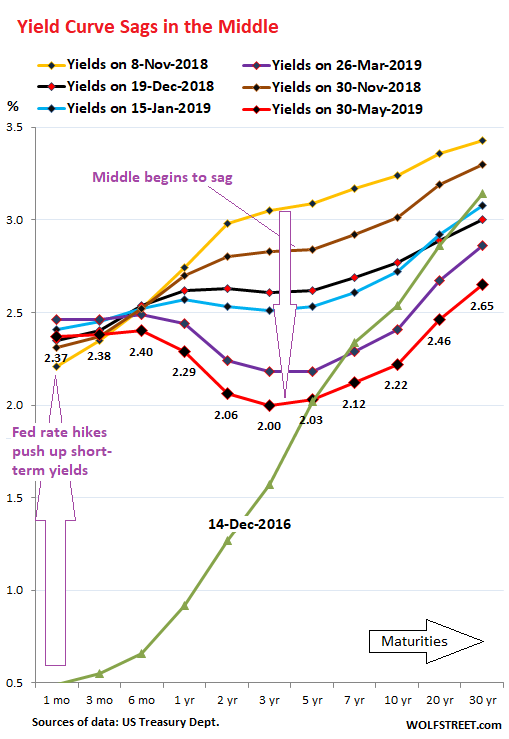 The entire portion of the yield curve from the 3-year yield through the 10-year yield has now dropped by over 1 percentage point since the peak on November 8, 2018. Some more standouts:

The 6-month yield had been anchored since late October at round 2.5%, with only slight variations. It now too has dropped out of this range and hit 2.38% over the past two days but ticked up to 2.40% today.

What began in November with a flat spot between the 2-year yield and the 7-year yield has now turned into this full-fledged middle-age sag as the Fed raised rates one more time in December, thereby pushing up short yields, even as the longer yields came down, but with the largest decreases in the middle.

This leaves the yield curve inverted in an odd way, with a sag in the middle, and depending on which classic inversion pair you look at, the yield curve is either inverted, or it is not inverted:

The past six recessions followed the 1-year-10-year yield curve inversion with a lag of about 12-18 months. The inversions occurred where the red line (1-year yield) is above the blue line (10-year yield). Click on the chart to enlarge: 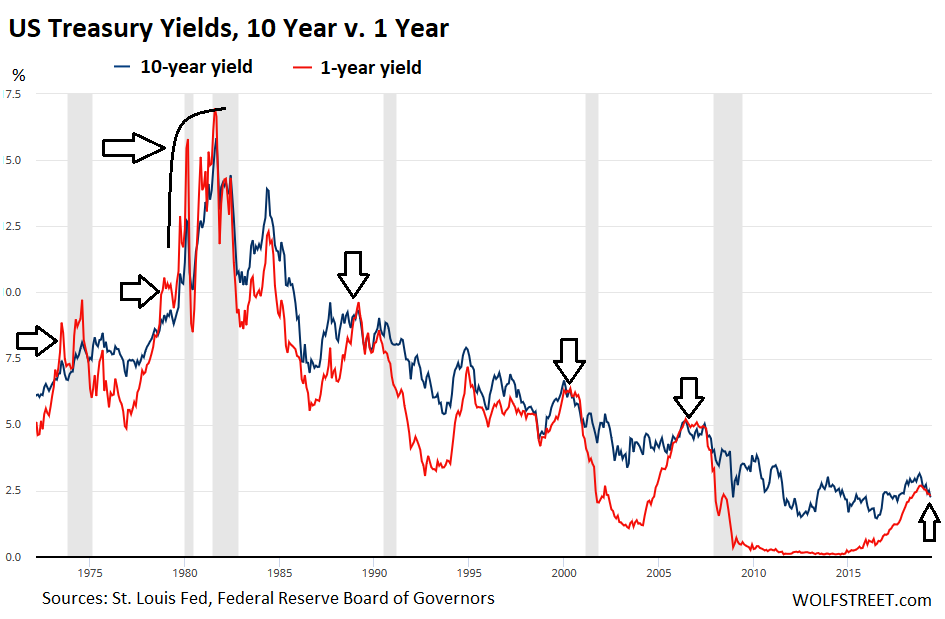 But the oddity remains: Historically, the 2-year-10-year spread inverts well before the 3-month-10-year. Not this time. Over the past six months, the 2-year-10-year hasn’t moved any closer to inverting. Today’s 16-basis point spread is about the same as late last year, despite the bottom threatening to fall out in the middle, which makes this inverted yield curve a peculiar creature with a growing middle-age sag.

41 comments for “Yield-Curve Spaghetti: “Middle-Age Sag” Gets Fatter, May Serve Up Surprises”