One of them is wrong. Watch out for it to snap in an ugly manner.

When the economy goes into a downturn, even a plain-vanilla recession or near-recession and not a crisis, junk bonds behave badly. This is because over-indebted companies with iffy cash flows – those are the ones that are junk rated – begin to buckle.

In a downturn, they have no wiggle room; some default on their debts and file for bankruptcy, stockholders get shafted, and bondholders take big losses. Everyone knows the drill. Fear of this happening spreads throughout the junk-bond market. Junk-bond prices fall and yields surge.

Borrowing costs for some riskier companies will shoot through the roof, which will cause them to be unable to borrow new money to pay off existing creditors, and they’ll default too. And these waves of defaults will scare the market further. Investors want to be paid ever larger premiums over Treasuries securities – which are considered free from credit risk. And the difference in yield between junk bonds and Treasuries – the yield “spread” – widens brutally.

Typically, in this scenario, Treasury yields fall, as Treasury securities become more sought-after as haven, thus driving up Treasury prices. These moves are typically backed by the expectations the Fed would cut rates, if it isn’t already cutting rates.

In this downturn scenario, junk bond yields are surging while Treasury yields are falling, and the spread between the two is blowing out.

For example, take the spread between the average yield at the riskiest end of the junk-bond market, CCC-rated and below (as tracked by the ICE BofAML US High Yield CCC or Below Effective Yield index), and the equivalent Treasury yield:

And in today’s scenario?

Since December 24, the 10-year Treasury yield has dropped 50 basis points (half a percentage point) and the yield curved sagged in the middle and partially inverted. In many people’s minds, this is screaming “recession” in every direction. Inverted-yield-curve-and-recession talk is now everywhere.

Wall Street pundits have been clamoring vociferously for a series of rate cuts. And they have propagated the theory that the Fed has performed a “U-Turn,” in response to the US economy heading into a recession.

And junk bond yields? CCC-and-below-rated yields should have soared in this economic-slowdown scenario, they should have doubled, at a minimum, given how much of a beating investors could expect to take during the wave of defaults associated with a downturn, and how much in yield investors would demand in return for taking that beating.

But the opposite happened. The average yield of CCC-and-below-rated bonds fell from 13.7% on December 26 to 11.2% now.

There is no fear of an impending recession in the junk bond market. The market is sanguine. It’s leisurely sorting through company-specific risks. But the overall market has calmed down a lot from December 24. This chart shows the spread between CCC-and-below-rated bonds and Treasuries: 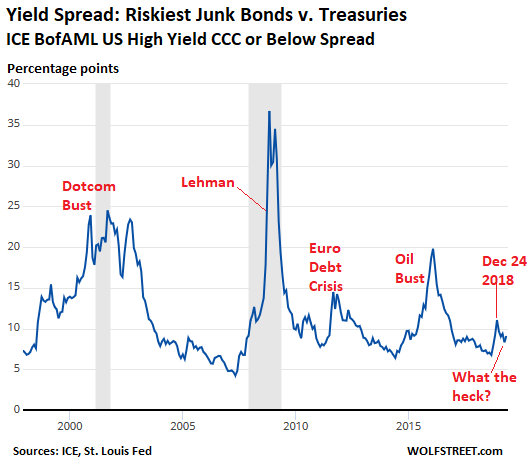 So now, the Treasury market with its inverted yield curve and declining yields on the long end is clamoring for rate cuts, and it’s acting as if a recession were imminent or has already started. But the junk bond market is acting as if it were a big boom party, and risks are just minor company-specific issues, rather than overall economic issues.

But they cannot both be right. So what gives?

It could be that the junk bond market ignores the problems in the economy – that it is completely oblivious to the impending downturn and the corporate default wave that this would entail.

Or it could be that the Treasury market has gone nuts – that all this clamoring for rate cuts and these proclamations of the Fed’s mythical “U-Turn” (cutting rates and re-starting QE) has polluted investors’ minds.

Or it could be that international investors are spooked by developments in China or Europe or whatever, and that they’re massively seeking US Treasuries has haven from turbulence outside the US.

Or it could be whatever.

“Why” markets are doing what they’re doing – “Dow dropped 300 points because…” – is just speculation. We rarely know with certainty “why” markets move in certain ways. And that uncertainty – market participants disagreeing over the direction – is what makes a market with buyers and sellers.

But if bond markets are seen as a predictor of the next downturn, then either the junk bond market or the Treasury market is wrong.

If the junk bond market is wrong, it would be set up for a painful reckoning.

This sort of snap-back in Treasury yields happened in July-December 2016: as recession fears faded, the 10-year yield jumped by over 1 percentage point, from 1.37% to 2.6% — nearly doubling in less than six months.

So we can take our pick. But they can’t both be right.

Here’s the Fed introducing a new thingy about “patient” to tamp down on the rate-cut clamorers on Wall Street. Read...  My Fancy-Schmancy “Fed Hawk-o-Meter.” And the Fed Says It’ll be “Patient” with Rate Cuts, Even at “Low Inflation”

103 comments for “OK, I Get it, Markets Have Gone Nuts: Junk-Bonds Are in Party Mood, Treasuries Clamor for Doom & Rate Cuts”