The Fed introduces a new thingy about “patient” to tamp down on the clamorers on Wall Street.

For the minutes of the FOMC meeting on April 30 and May 1, my fancy-schmancy Fed Hawk-o-Meter more than retraced the spike of the prior meeting, falling 19% from 26 to 21, and is now in the lower range of the red-line zone, indicating that rate hikes are not imminent, but that a rate cut remains off the table. This was confirmed by the use of “patient approach” to cutting rates: 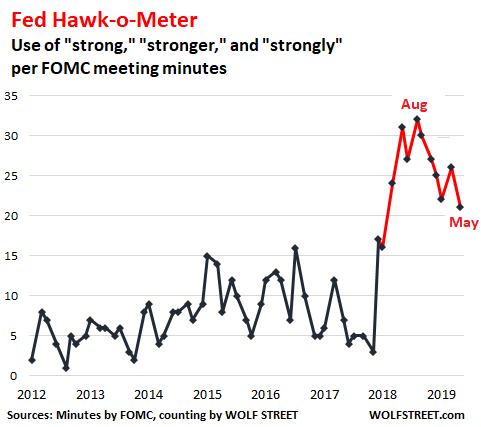 The Hawk-o-Meter quantifies and visualizes what the Fed wants to communicate to the markets by counting how often “strong,” “strongly,” and “stronger” appear in the minutes to describe the current economy in the US. In the minutes of the April 30 – May 1 meeting, released this afternoon, those words appear in this sense 21 times.

To iron out the volatility in the “data,” so to speak, and to clarify the trends, I converted the chart to a three-meeting moving average. By December already, the Fed started backing off its hawkish stance conveyed during the meetings last August, September, and November. Despite the recent drops, the Hawk-o-Meter remains in red-line territory: 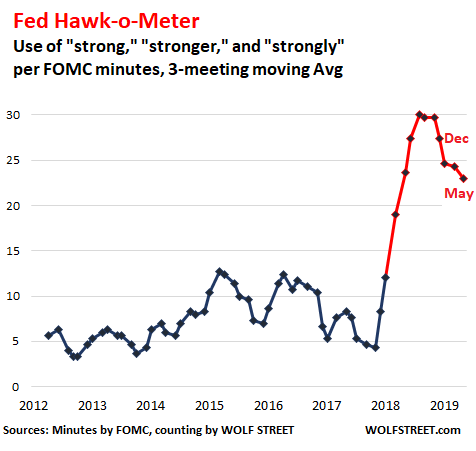 The average frequency per meeting minutes of “strong,” “strongly,” and “stronger” between January 2012 and December 2017 was 7.4 times. The 21 mentions in the April-May meeting minutes represented an increase of 184% from the pre-redline average.

I weeded out two false positives:

The words “strong,” “strongly,” and “stronger” actually appear 23 times in the minutes, but in two instances, they were used in a context that made them “false positives.” The first was used in the sense of slowing down from a strong pace; and the second described a technical issue in the discussion of the maturity composition of its Treasury securities portfolio. Those two were deducted from the tally:

In other words, Dear Market, stop clamoring for a rate cut just because PCE inflation is below 2%. It’s not going to happen.

According to my fancy-schmancy Fed Hawk-o-Meter, the Fed is trying to tell the markets via these minutes that rate hikes are not imminent and that rate cuts are off the table. There was no “U-Turn,” as the clamorers on Wall Street had clamored for – meaning turning around and going the opposite way. Instead, the rate hikes came to a stop, but might eventually restart; and the QE unwind, after continuing full blast through April, is on schedule to slow down this month and will come to a smooth stop by September. No U-turn either.

38 comments for “My Fancy-Schmancy “Fed Hawk-o-Meter.” And the Fed Says It’ll be “Patient” with Rate Cuts, Even at “Low Inflation””