These are just the “Flash” Purchasing Managers’ Indices (PMI) which are reported a week before the final PMIs at the end of the month, and they represent just one view, but these are big moves, both, in US manufacturing and US services, big moves in the wrong direction, simultaneously, with both sectors now only by a hair still in expansion mode. The report by IHS Markit noted for manufacturing and services combined, with disconcerting implications going forward, that the rise in new orders “was the softest recorded since the series began in October 2009.” So one by one.

Manufacturing gets even weaker:

The IHS Markit Flash US Manufacturing Purchasing Managers’ Index fell two full points from 52.6 in April to 50.6 in May. Above 50 means growth, so this is still growth, but it’s a heck of a lot slower growth than a month ago, and very near the zero-growth red line in the chart (data via Investing.com): 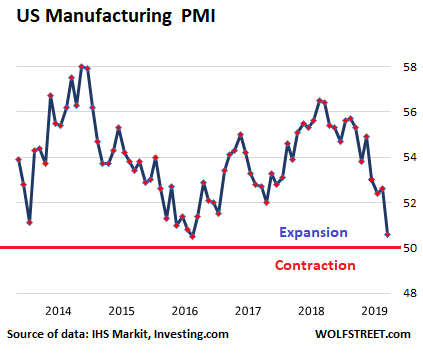 Manufacturing has been weakening around the world, with PMIs falling below 50 in some major manufacturing countries. In Germany, it fell into the dreadful mid-40s, and therefor into steep contraction mode. In this context, the US manufacturing PMI had been the cleanest dirty shirt, but that advantage is fading quickly.

Underlying data indicated a broad-based slowdown in the rates of expansion for output, employment and pre-production inventories, while new orders declined for the first time since August 2009.

And new orders are a problem: “New orders were stymied by reports of weaker overall demand conditions and hesitancy among clients to place orders. The fall in new business was only fractional, but signaled a marked turnaround from the solid rise seen in April. Data suggested that demand from both domestic and foreign clients declined during the month, as exports also fell.”

This type of slowdown in manufacturing is “consistent” with annualized GDP growth of 1.2% in May. But…

“Worse may be to come, as inflows of new business showed the smallest rise seen this side of the global financial crisis. Business confidence has meanwhile slumped to its lowest since at least 2012, causing firms to tighten their belts, notably in respect to hiring. Jobs growth in May was the weakest seen for over two years.”

PMIs are based on surveys of industry executives without disclosing their names and companies. The “panelists” are asked whether certain aspects of their business are increasing or decreasing, compared to a month ago, such as new orders, new export orders, employment, backlog, inventories, supply chain delays, input costs, etc. Their responses form the sub-indices. For the headline PMI, they’re asked an overall question: “Is the level of business activity at your company higher, the same or lower than one month ago?”

PMIs are a boots-on-the-ground instant view by executives about how their company is being impacted by economic developments and precede by a good margin monthly or quarterly data released by corporate and government entities.

The manufacturing sector has been weak since February, but the PMI survey suggests that “the sector’s woes intensified in May to mean factories will therefore likely act as an increasing drag on the economy in the second quarter.”

“Trade wars remained top of the list of concerns among manufacturers, alongside signs of slower sales and weaker economic growth both at home and in key export markets,” the survey said.

Services now dragged down too.

The IHS Markit Flash U.S. Services PMI Business Activity Index dropped 2.1 points from 53.0 in April to 50.9 in May, after a 2.3-point drop in the prior reading. The first quarter in services had been strong, but the drop in April and May combined of 4.4 points was the steepest two-month drop since March 2016 when the services PMI dipped below 50 into contraction mode. May’s reading is still in expansion mode, above the red line, but by just a hair (data via Investing.com): 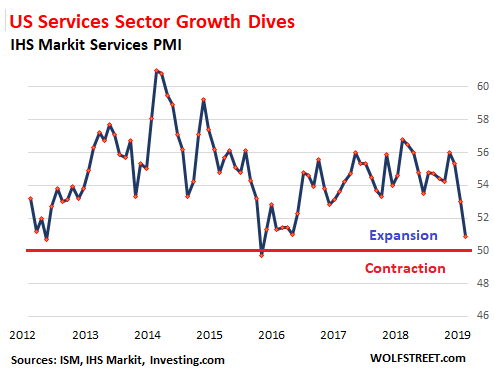 In the service sector, new orders “increased only slightly, as the rate of growth eased for the third successive month amid softer demand conditions and intense competition,” and the backlog of work contracted.

Growth in employment “dipped to a 25-month low.” The service sector is still increasing employment, but at a slow pace.

The IHS Markit Flash U.S. Composite PMI Output Index, which combines the manufacturing and services PMIs, dropped from 53 in April to 50.9 in May, barely in expansion mode, the slowest expansion in overall business activity since May 2016, “as a struggling manufacturing economy was accompanied by a notable downshift in gear in the service sector.”

Recall that 2016 was the year that GDP grew a miserably slow 1.6%, the slowest expansion since the Great Recession.

“Growth of business activity slowed sharply in May as trade war worries and increased uncertainty dealt a further blow to order book growth and business confidence,” the report said.

Fears are now rising that the manufacturing “malaise” is spreading to the service sector, “growth of which slumped in May to one of the weakest since the global financial crisis.”

The service sector is the largest component of the US economy, and its performance is “a key gauge of the health of domestic demand.” And this slowdown spreading into services “poses downside risks to the outlook.”

Concerning inflation pressures and the much-threatened but mysteriously missing impact of tariffs on prices, the report said: “Input price inflation eased for the third month running in May, despite continued comments from panelists regarding the ongoing impact of tariffs. The slower increase in costs and greater competitive pressures underpinned a renewed fall in output charges, the first such decline since February 2016.”

And so the outlook by these businesses for the coming 12 months deteriorates: “Business expectations fell to their lowest since the series began in July 2012. Reduced confidence was commonly attributed to hesitation among clients and increased uncertainty, which were both often linked to global trade tensions.”

The weakness in manufacturing has been well-documented. But this sudden deterioration in the all-important service sector, from still strong in the first quarter, to hitting the skids in April and May, according the IHS-Markit PMI, is disconcerting.

The Flash IHS Markit PMI is only one view. There are others. The broader ISM Non-Manufacturing PMI for May hasn’t been released yet, and for April, it was still strong, though slightly less strong than in prior months. Other data on services in the second quarter will emerge over the next few months. And we will see if they confirm that growth in services is fast disappearing.

Where are the foreign investors in this phenomenon now playing out in the US housing market? US Home Sales Drop, Drop, Drop Despite Lower Mortgage Rates. But Mortgage Applications Jump. What Gives?

54 comments for “Suddenly US Service-Sector Growth Dives, Manufacturing Gets Even Weaker”