Where are the foreign investors in this phenomenon?

Declining home sales in the US is a phenomenon that baffles the industry, given that mortgage rates have dropped sharply from the recent peak in November, and home sales should have jumped, logically speaking. But no.

Sales of existing homes – single-family houses, townhouses, condos, and co-ops – in April ticked down from March and fell 4.4% from April last year, to a seasonally adjusted annual rate of 5.19 million homes, according to the National Association of Realtors, after having dropped 5.4% year-over-year in March, 2.3% in February, 8.7% in January, and 10.1% in December. The drops in November through January had been the largest since Housing Bust 1 (data via YCharts): 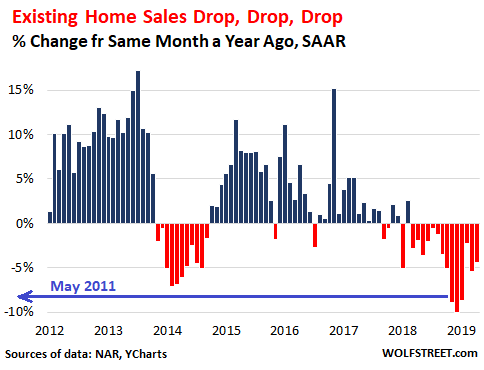 One culprit of declining home sales is that student loans “hinder millennial homebuyers,” according to the report. And yes, they do. But they did so before too. That is an ongoing factor in the US economy, and not a thing that suddenly popped up out of nowhere. 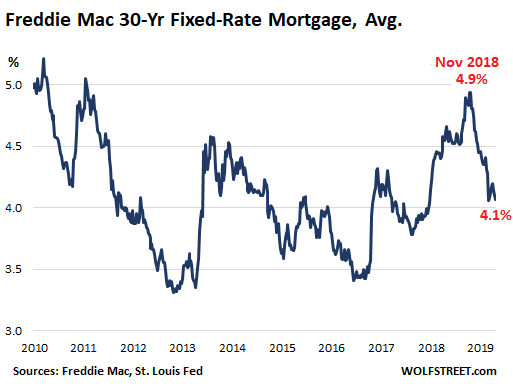 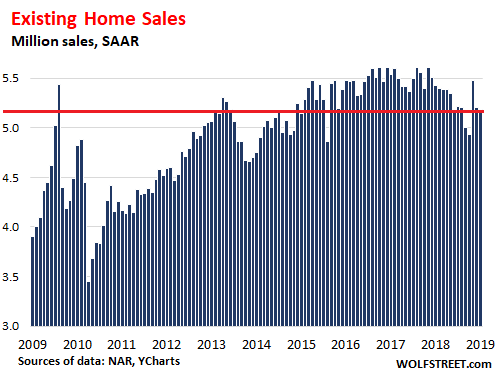 From late March through early May, the four-week rolling average of purchase-mortgage applications jumped by the double digits compared to the same periods last year, with gains ranging from 10% to 21%: 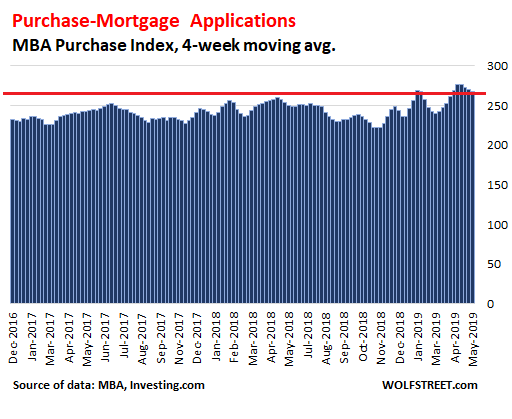 So this poses an interesting situation: Months of falling sales of existing homes vs. surging purchase-mortgage applications.

This may mean that people who borrow money to buy a home are out there trying to buy, while some people or entities that do not need a mortgage – such as cash-rich households, or investors that can borrow at the institutional level via bond sales and the like, or investors sourcing their funds from overseas, including those needing to launder some dirty money – are retreating from the market.

According to the NAR’s report all-cash sales as a percent of total purchases inched down to a share of 20% of the transactions in April, down from a share of 21% in April last year.

So this points at weak demand from cash buyers, as reported by the NAR’s Realtors. But it explains only a small part of the difference between rising purchase mortgage applications and falling sales.

Under some circumstances, tightening lending standards might cause more mortgage applications to be turned down at a greater rate, but lending standards are not tightening; and for non-qualified jumbo residential mortgage loans, banks eased their lending standards in the first quarter, according to the Senior Loan Officer Survey, released by the Federal Reserve earlier in May.

Something else is going on here to create this gap between rising mortgage applications and falling home sales. So I’m going to piece a theory together, going back to the opaque nature of many residential real estate transactions, and how payment methods are reported.

A couple of years ago, the US Treasury’s Financial Crimes division started selectively cracking down in some regions on money laundering schemes by imposing reporting requirements on real estate transactions in those regions. Late last year, it expanded the program, lowered the thresholds for reporting requirements to purchases of $300,000 and up, and included payments with cryptocurrencies to “further assist in tracking illicit funds and other criminal or illicit activity, as well as inform FinCEN’s future regulatory efforts in this sector.”

So it is possible that these government reporting requirements, in addition to capital controls in China and other factors, have reduced real estate transactions funded by dubious cash or money transfers, and that home sales have slipped in part because of this, and that, given the opaque nature of these transactions, they may never have been fully reflected in the “all-cash” transactions reported by the NAR, so their decline wouldn’t be reflected either.

A slippage among investors, including foreign investors, would explain why sales of existing homes have been falling, while households, induced by lower mortgage rates, are still trying to buy, as shown by rising mortgage applications.

Money laundering in Canadian real estate is a widely accepted fact of life these days, but the impact isn’t. Read… How a Little Money Laundering Can Have a Big Impact on Real Estate Prices