Impact felt by the real economy and the most vulnerable consumers.

In the first quarter, the credit-card “charge-off” rate at the 4,650 or so smaller US commercial banks – all banks other than the largest 100 banks – ticked down to 7.37%, the sixth quarter in a row above 7%. During the peak of the Financial Crisis, the charge-off rate at these banks was above 7% only four quarters, but not in a row, topping out at 8.9%. These smaller banks have taken a lot of risk in their credit card strategies in recent years, going aggressively after subprime customers that had run out of luck at the largest banks.

The credit-card charge off rate at the largest 100 banks rose to 3.78%, the highest since the first quarter of 2013. For all commercial banks combined, the charge-off rate rose to 3.83%, the highest since the fourth quarter 2012. The largest banks have learned a costly lesson during the Financial Crisis, when they got hammered with double-digit charge-off rates and have since focused on customers with lower risk profiles. And yet, slowly but surely, credit card charge-offs are rising across the board: 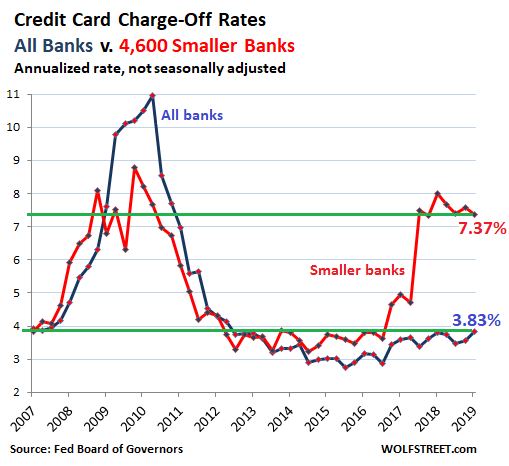 These data points that the Federal Reserve Board of Governors reported Tuesday afternoon are another warning in consumer land where serious auto-loan delinquencies, driven by subprime loans, have reached Q3 2009 levels. Credit cards have not yet reached this stage, but problems are beginning to pile up.

A credit card loan is deemed “delinquent” when it is 30 days or more past due. Balances are removed from the delinquency basket when the customer cures the delinquency, or when the bank “charges off” the delinquent balance (net of whatever it was able to recover) against its loan loss reserves. The charge-off rate is figured as a percent of average credit-card balances, and is annualized.

The delinquency rate on credit-card loan balances at commercial banks other than the largest 100 banks declined to 5.43%, after having spiked to 6.2% in the third quarter. During peak-Financial Crisis, the delinquency rate at these smaller banks topped out at 5.9%. So these smaller banks got walloped last year, and they’re now scrambling to clean up, and tighten the lending standards. 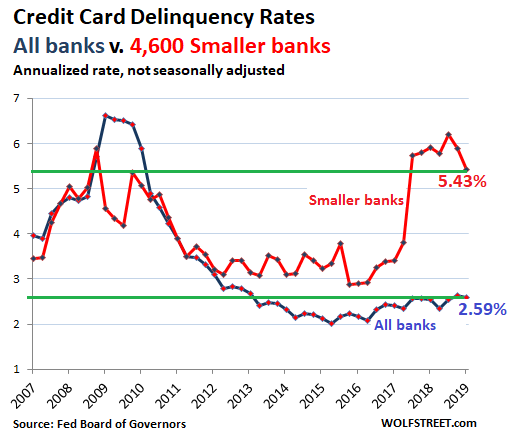 There is about $1 trillion in revolving consumer credit outstanding, most of which are credit card balances. These rising charge-off rates and delinquency rates add another wrinkle to the State of the American Debt Slaves.

This rich profit obtained in the credit-card business induces banks to take some risks.  And the calculus works out in good times. Banks make the most money off their riskiest customers, its subprime customers, that pay the highest interest rates and fees. But these are the people who can least afford them.

This too is part of the calculus, by definition: The highest risks have to reward investors with the highest yields to compensate them for the losses when they arrive. That’s why junk bonds pay higher yields than US Treasury securities. And that’s why a bank charges 25% or more in interest on a credit card offered to subprime customers because it sees a good chance it might eventually have to charge off some of the balances and take a loss on them.

These high interest rates increase the likelihood of a charge-off, but until it gets to this point, the bank books dizzying amounts of interest income – and income is a quarter-to-quarter affair.

So when a large part of the loans with 20%-plus interest rates default after a couple of years, while the bank collected 20% interest for those two years, it’s just part of the calculus. And the bank hopes that overall, the calculus works out. But that calculus can suddenly go haywire, as it does when the credit cycle turns, and as it did during the Financial Crisis.

Some smaller banks that have gone way out on the subprime limb are now getting bogged down in losses on their credit-card loan books. But at the overall delinquency rate of below 3% currently, credit cards are still highly profitable for banks overall.

Banks have also spread the risks by securitizing some of their credit-card balances and offloading them to investors.

As these delinquency rates grow, they will cause some losses and increase the focus during earnings calls. On their own, credit card losses won’t topple the overall banking system or the largest banks anytime soon – though when other factors start coming together at the same time, they could contribute to the pressure, but for that to happen, credit-card losses would have to be much higher to where they eat up all profits from credit cards.

But credit-card losses already have an impact on the economy, on retail sales, and on the most vulnerable consumers – and this is just the beginning. As banks tighten their lending standards in response to the rising losses, and as more credit-card accounts become delinquent and prevent their holders from buying on credit, the credit flow to the most vulnerable consumers gets throttled. And they have less money to spend. And so they will spend less.

This is already the case with subprime auto loans that are now blowing out and that have forced lenders to tighten their lending standards, which is causing a decline in new vehicle sales that is now in its third year. Read…  Subprime Bites: Auto-Loan Delinquencies Spike to Q3 2009 Level, Despite Strongest Labor Market in Years