So Sales Finally Tick Up.

Home builders, the ultimate pros in the housing market, have figured out something after the malaise in the second half last year: Cut prices and buyers will come. The median selling price of new houses dropped 9.7% in March from March last year to $302,700, the Commerce Department reported this morning. This took the price back to about where it had first been in December 2014 ($301,500): 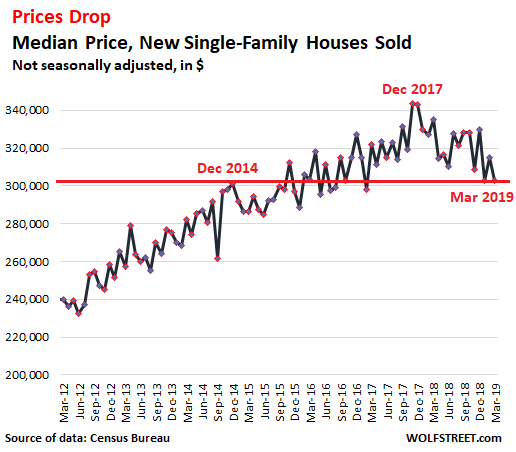 This shift in the market, and the price cuts by homebuilders, has pushed the median new house price down 11.8% from the peak in December 2017. The year-over-year price drops starting in November last year were the sharpest such drops since Housing Bust 1: 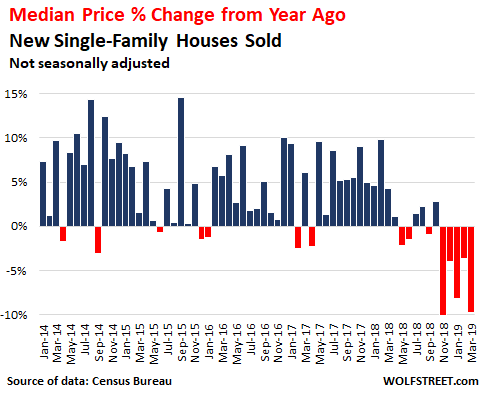 The new-house sales data, produced jointly by the Census Bureau and the Department of Housing and Urban Development, is volatile. It is revised in the following months, often quite drastically. But after a while, the trends become clear. 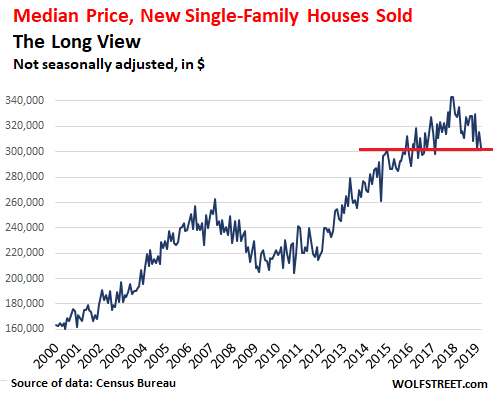 Sales of new houses, in terms of the seasonally adjusted annual rate, had dropped six months in a row on a year-over-year basis, but in March they responded to lower prices and showed the first year-over-year increase, surpassing the strong March last year by 3.0%, with a rate of 692,000 houses, the highest rate of sales since November 2017: 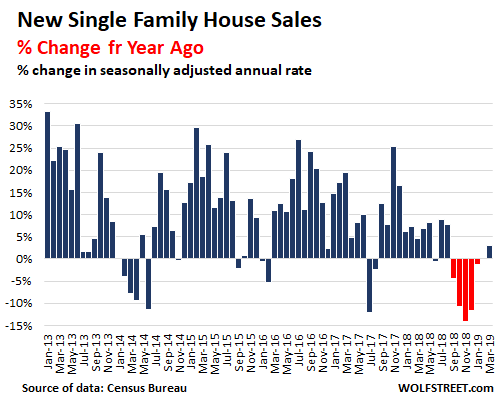 And supply has started to edge down from the peak in January of 348,000 houses to 344,000 houses, a supply of 6.0 months at the current rate of sales. This is still high compared to normal levels, but it’s reversing the spike in supply that had shot past 7 months last year: 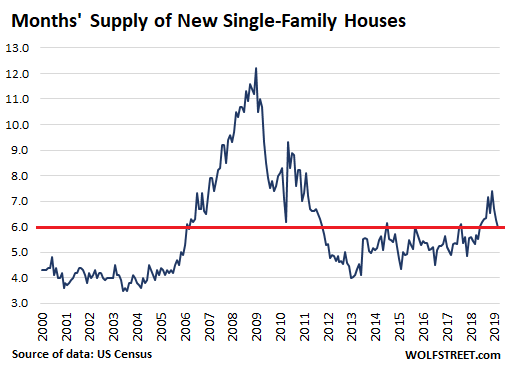 All this makes basic sense. Homebuilders are in the business of building and selling houses, and unlike investors and homeowners, they cannot just not sell their houses when the market isn’t with them. So they sharpened their pencils and made deals at prices where the buyers were, and as prices dropped, sales ticked up and high inventories started to shrink a little. Price can fix a lot of problems.

But this is something homeowners and investors haven’t figured out yet. There is plenty of supply of existing homes, but it’s the wrong supply, priced too high, and sales fall. Read… Lower Mortgage Rates No Relief for US Home Sales

63 comments for “Cut the Price and They Will Come: New House Prices Drop to December 2014 Level”