16% of the 4 million new vehicles sold in the US in Q1 were assembled in Mexico.

The total number of new vehicles exported from Mexico to the US in the first quarter of 2019 surged 10.1% to 658,243 vehicles, according to figures compiled by the vehicle manufacturers association AIMA and released by Mexico’s National Institute of Statistics and Geography (INEGI). It’s all about “trucks”: 63% of these vehicles were “trucks” — pickups, SUVs, crossovers, and minivans. This Q1 surge in exports to the US comes despite the 3.2% decline in auto sales in the US. 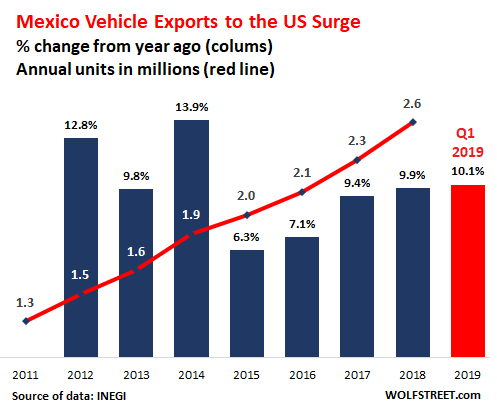 The latest figures cement Mexico’s position as number one exporter of automobiles to the US, ahead of Canada in second place. According to AIMA, 16% of the 4 million cars and other light vehicles registered in the U.S. in the first quarter of 2019 were assembled in Mexico. Roughly four out of five vehicles that Mexico exports are exported to the US. The remainder are exported to countries around the world, including Canada, Europe, China, other parts of Latin America.

There are two main reasons why Mexican vehicle exports to the US have doubled in the last eight years:

More global car manufacturers have set up shop in Mexico. In 2005 there were just six large vehicle manufacturers (Chrysler, Ford, GM, Honda, Nissan and Volkswagen) producing and exporting cars from Mexico. Today, the total number is 11, after Fiat, Toyota, Audi, Kia, and Mazda joined the fold.

Some of the biggest manufacturers have significantly expanded their operations in Mexico, where salaries for autoworkers are a mere fraction of what they are in the US. In 2011, GM exported 318,149 vehicles from Mexico to the US. By 2018, that had surged by 110% to 666,765, accounting for 23% of GM’s total US sales that year. In the first quarter, GM’s exports from Mexico to the US surged by 28% year-over-year to 181,594 vehicles. At this pace, GM is on track to set another annual record this year.

The other big movers over the last three months were:

In terms of exports to the rest of the world, there are some additional observations:

But to what extent can Mexico’s auto industry continue to rely on rising overseas demand for the vehicles it assembles given the ongoing slowdown in auto sales in its biggest market, the US, as well as the 17.2% rise in Mexican salaries agreed upon in the US-Mexico-Canada Agreement, which will raise input costs in Mexico’s car assembly plants? The agreement should strengthen, at long last, labor standards and rights in Mexico and reduce systematic wage repression in Mexico.

This system of wage repression is now being targeted by the new trade deal. It’s a system where corrupt local officials, corrupt union bosses, and automakers work out long-term contracts that lock in low wages as a condition for investment. This quashes the labor market — but benefits the automakers.

How well the central government in Mexico can enforce the new deal locally, when it’s finally all said and done, is a question many in the US are asking. The deal is also expected to create 76,000 new automotive sector jobs in North America through its new regional content rules, but it’s not yet clear where those jobs will end up materializing, if they do materialize at all. By Don Quijones.

Many Americans are priced out of the new-car market. Read…  Used-Car Market Profits from Carmageddon

19 comments for “US Auto Imports from Mexico Surge 10% in Q1 to New Record, Despite Dropping Sales in the US”