Many Americans are priced out of the new-car market.

At wholesale auctions, used-vehicle prices rose 4.0% in March from March last year, according to Manheim, the largest auto-auction company in North America, which runs about 8 million vehicles through its auctions a year. In the chart of the Manheim Used Vehicle Value Index, which is adjusted for mix, mileage, and seasonality, note the spike through October 2018, alongside the spurt of the economy in Q2 and Q3, and the subsequent decline that left prices at still very high levels: 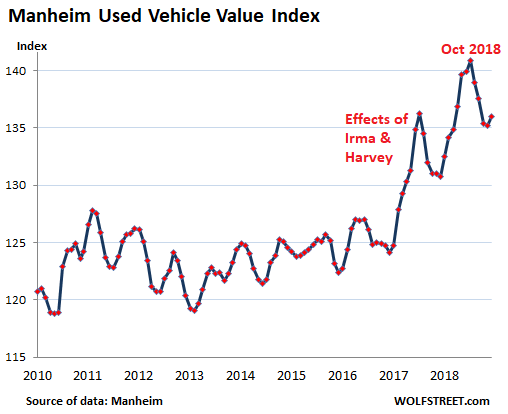 At these wholesale auctions, used mid-size cars – total duds as new vehicles – saw such brisk demand in March that prices jumped 7.2% from March a year earlier. Except for vans, all major vehicle classes experienced wholesale price increases compared to March 2018, according to Manheim, but the surge in the prices of midsize cars stands out: 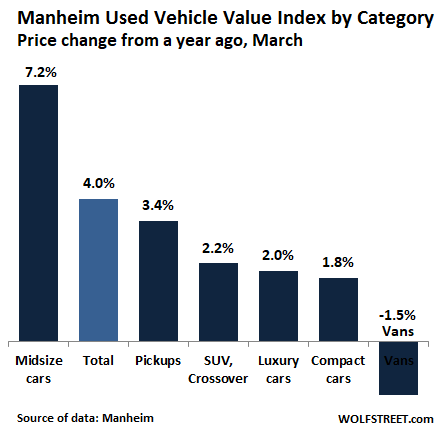 Used-vehicle sales in the US will likely be just under 40 million units this year, over twice the size of the new-vehicle market (about 17 million units). Backing the vast used-vehicle market is a liquid wholesale market, including auctions where rental car companies, leasing companies, and other entities are selling their vehicles to dealers that will then retail them as used vehicles.

In contrast to fairly brisk demand for used cars on the wholesale side, new cars have become total duds for automakers.

For example, when Ford announced its Q1 new-vehicle deliveries (-1.6%) yesterday two days behind everyone else, it said that sales of cars in the first quarter had plunged 23.7% from a year ago to just 98,265 in the quarter, and that sales of trucks – pickups SUVs, and crossovers – had risen 4.4% to 491,984 vehicles. For Ford, car sales are now down to merely 16.7% of total sales. And a big part of that is to rental fleets.

Cox Automotive, which owns Manheim, estimated that industry-wide new-vehicle sales to fleets rose 4.5% year-over-year in March; but that sales to retail customers fell 4%. The largest fleet buyers by far are rental car companies, and they’re still big buyers of cars.

These cars that were sold to fleets will enter the used vehicle market sooner or later via auctions, where dealers buy them to refill their inventories of used cars. And retail customers, who are increasingly spurning new cars, are buying used cars.

The rift in terms of cars between what is happening in the new-vehicle market and in the used-vehicle market is getting wider: On the new side, car sales have been getting crushed since 2014, while sales of “trucks” – pickups, SUVs, crossovers and vans – have become red-hot. Over the four years of Carmageddon, as I call it, from 2014 through 2018, industry-wide new-car sales have plunged nearly 30% to just 5.5 million units while new “truck” sales have soared 38% to 11.8 million units. This is the chart I like to show: 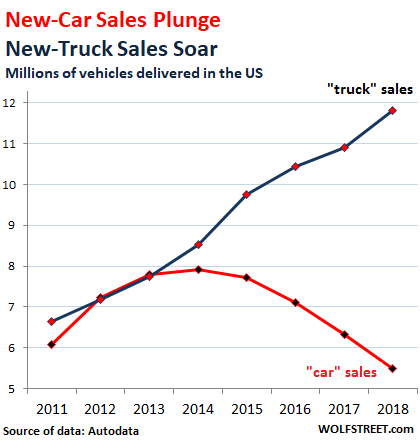 And many of these dwindling numbers of new cars are being bought by rental fleets that will two or three years later place them on the used-car market, where retail customers have the hots for them. So why is this?

In 2018 as well as in Q1 2019, the Fiesta was the only Ford car model with increasing sales (well, OK, in Q1, sales of the Police Interceptor ticked up 1.6%). The Fiesta is now just a hair behind the Mustang (sales down 12% in Q1) and will likely surpass the Mustang and become the number two best-selling car in the Ford lineup (behind the Ford Fusion, sales down 3.5% in Q1).

The Fiesta is Ford’s cheapest vehicle. The base model comes with an MSRP of just over $14,000; decked-out versions cost more, but deals are available. So this is less than half of the national average transaction price of all new vehicles in Q1 of $33,300.

Wall Street hates the Fiesta. The full-pop retail price of a Fiesta is less than Ford’s profit margin on nicely equipped F-150. Think about that for a moment.

The Fiesta has paper-thin profit margins (though it’s built in Mexico), and Ford doesn’t even push it.  It’s designed to keep Ford’s Corporate Average Fuel Economy (CAFE) inline. Without the CAFE rules, Ford might not build it at all because there’s no money in it. But there is growing demand for a car in this price category.

And this price category is what powers the used-car market. $14,000 buys a nice fully-loaded three-year-old car. Heck, $10,000 does. There are many Americans for whom that price range is the maximum. But on the new-vehicle side of a dealership, there is almost nothing left in that $14,000 category, except for a bare-bones small car, such as a Fiesta.

This is a market that automakers have mostly abandoned because they’re having trouble making big-fat profit margins at that end of the price scale. So it’s not that Americans don’t like to buy new cars any longer. It’s that most new cars have been priced above where demand for cars is, and new-car sales have collapsed, even as Americans are buying used cars to get what they want at the price they can afford.

The problem with Mercedes and BMW is that they don’t yet sell luxury pickups, though they’re finally figuring it out. Read… Q1 Carmageddon for GM, Fiat-Chrysler, Toyota, Nissan, Mercedes, Mazda…