In the City of Vancouver, British Columbia, in March, sales of detached houses fell 14% from March 2018, to merely 117 houses, down 50% from March 2017 and down 74% from March 2016, to the lowest number of sales since 1985, as the market has frozen up. Buyers and sellers are too far apart, and both sides have lost interest in a meeting of the minds.

“It’s hard to imagine sales falling any further from here; what is more likely is that they continue to remain sluggish for a prolonged period of time but increase slightly as prices decline and buyers on the sidelines can be enticed back into the market with lower prices,” says Steve Saretsky, a Vancouver Realtor and author behind Vancity Condo Guide. His chart below shows detached house sales for every March going back to 1992: 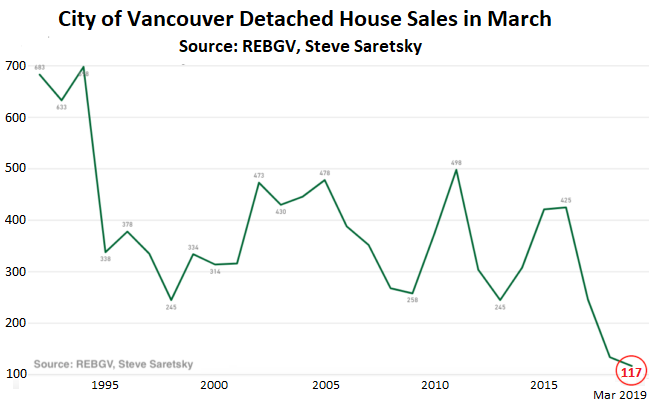 Inventory for sale now stands at 12 months’ supply at the current rate of sales. This is still very high, but it’s down 51% from a year earlier, not because the market has improved but because it has essentially frozen up, and some sellers have pulled their unsold units and other sellers are not putting them on the market, hoping for better times.

This high level of inventory is likely to put “downward pressure on home prices, particularly at the higher end where Chinese capital flows have hit the brakes,” Saretsky says in The Saretsky Report for March (download the PDF here).” This pushed the MLS Home Price Index down by 11.4% from March last year, “the steepest decline in a decade.” 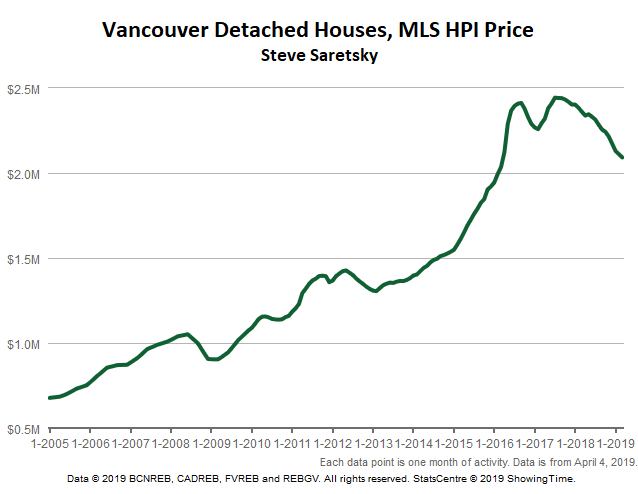 But the price declines vary across the spectrum: Saretsky notes that house prices “at the higher end have fallen as much as 35% from peak valuations a few years ago,” while price declines are much more moderate at the lower end. “For example, an entry level detached house with a basement suite on the East Side of Vancouver has fallen much less, around 15-20%.” Which is still a steep price decline.

At the same time, inventory of condos for sale jumped by 96% to 1,905 units. Months’ supply jumped from 1.8 months in March 2018 to 5.4 months now. Plunging sales and rising inventories has put pressure on prices. 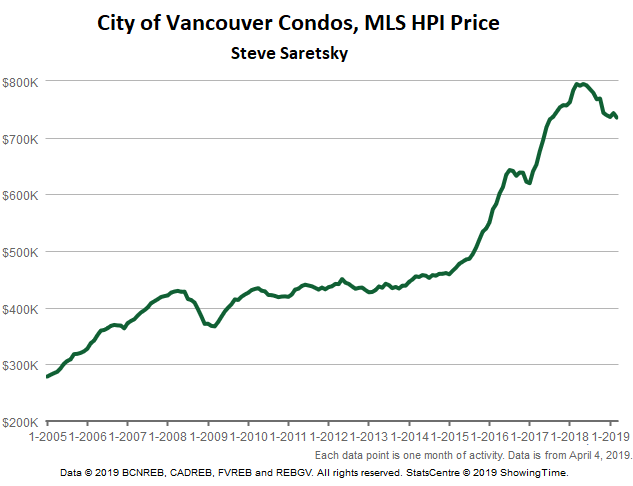 Condos face enormous headwinds going forward, in form of a flood of new supply coming on the market: with impeccable timing, over 40,000 condos are under construction in Greater Vancouver.

Vancouver has joined some of the other major cities around the world with housing bubbles whose duration and magnitude have amazed the world and that were scheduled to inflate further for all times to come – because, you know, you can’t lose money in real estate – but that are now deflating with panache. Among them are Sydney and Melbourne in Australia.

But their housing bubbles were not pricked by the central bank — on the contrary. Read...  Update on the Spreading Housing Bust in Australia, and Why it’s Happening

71 comments for “Update on the Deepening Housing Bust in Vancouver, Canada”