This bubble was not pricked by the central bank — on the contrary.

Home prices in the metro area of Sydney, according to CoreLogic’s Home Value Index, fell 0.9% in March from February and 10.9% from March last year. Prices in the most expensive quarter of the housing market dropped 11.9% year-over-year. Since its peak in July 2017, the index has dropped 13.9%: 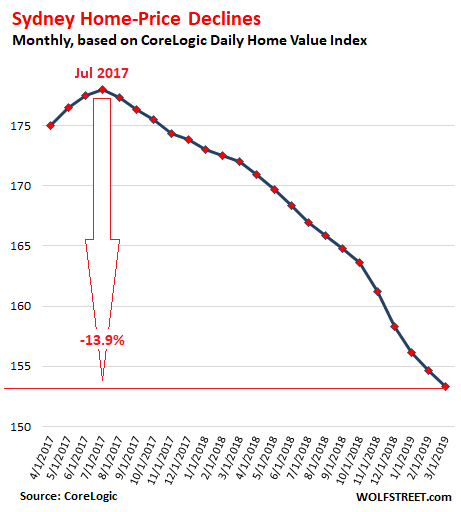 For a while, there was a rumor that first-time buyers would save the market, and that this was visible because in the big cities, such as Sydney, they could only afford to buy condos, and condo prices would hold up, it was said. But condo prices are now rapidly catching up: the CoreLogic Home Value Index for condos dropped 1.2% in March from February and is down 8.9% year-over-year.

In the Melbourne metro, the second largest market in Australia, the CoreLogic Home Value Index fell 0.8% in March from February, and 9.8% year-over-year. Prices in the most expensive quarter of the homes the sold dropped 13.9% from March last year. 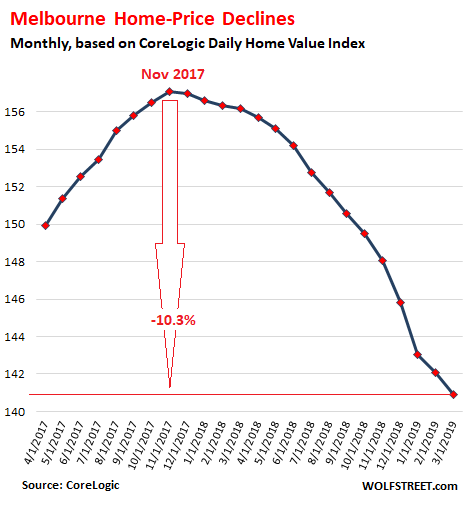 Of the 10 sub-regions of Australia’s capital cities that had the largest home price declines, seven were in the Sydney metro and three were in the Melbourne metro, according to CoreLogic’s report:

Although housing market conditions remain relatively healthy in these regions, conditions have noticeably softened over the past twelve months with values either slipping or the pace of growth slowing materially.

Concerning Perth and Darwin, CoreLogic head of research Tim Lawless explained the massive benefits for a big part of the population of a housing bust – any housing bust:

“The silver lining here is that housing is now very affordable and first home buyers are proportionally much more active relative to other areas of the country.”

The chart below from CoreLogic (data as of March 1, 2018) shows the long-term movements of the median house values in the six largest state capitals. The downturns in Sydney (top gray line) and Melbourne (red line) stand out. The thick black line whose downtrend started in 2014 is for Perth. Darwin is not on the chart. Note how prices in Hobart (green) have surged in recent years. Amounts in Australian dollars (click to enlarge): 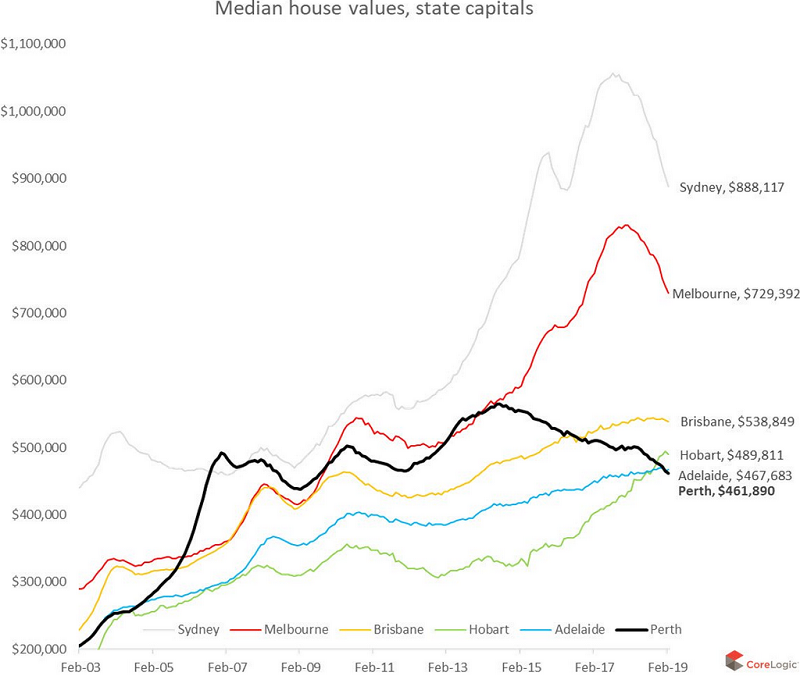 Prices are too darn high for average workers. After years of blistering price gains that have by far outrun wage gains, unaffordability hamstrings many potential buyers who’d actually live in the homes they’d buy. This removes a big part of the potential buyers.

Enormous household debt, mostly related to housing, just as collateral values are now declining. In the fourth quarter 2018, the ratio of household debt to disposable income hit a new record of around 190%, among the highest in the word.

The construction boom is dousing the market with record new supply, including a flood of new condos that has gotten the worried attention of the Reserve Bank of Australia.

The exposure of the banks’ mortgage shenanigans and wrongdoing. The exposure was first carried out in the media and eventually and all too gingerly by regulators and ultimately by the Royal Commission into Misconduct in the Banking, Superannuation and Financial Services Industry. These revelations and the regulatory crackdown are putting a damper on these shenanigans…

Resulting in tighter credit conditions. Banks are now scrutinizing borrowers more thoroughly, and as they have tightened up underwriting standards, liar loans and other shenanigans are more difficult to pull off. And regulators have cracked down on interest-only loans for investors.

Consumer sentiment has soured on real estate, after years of ceaseless hype.

Chinese investors have lost their enthusiasm, in part because prices have dropped and the magic of quick and easy wealth is gone; and in part because China’s capital controls have started to work. Already concerning the darkening dynamics last year, CoreLogic had noted a “substantial reduction in foreign buyer activity.”

The one factor that isn’t a factor is the Reserve Bank of Australia’s policy rate, which is at a record low, and mortgage rates remain near record lows. So this is not a bubble that got pricked by the central bank. On the contrary, the RBA tried to keep the bubble going back in August 2016 by lowering its policy rate to that record low.

But now, the crackdown on banking shenanigans and misconduct plus an onslaught of new condos at worst possible time are worrying the RBA. Read…   Risks of Financial Instability “Appear to Be Elevated But Contained”: Australia’s Central Bank on Housing Bust

48 comments for “Update on the Spreading Housing Bust in Australia, and Why it’s Happening”