But the US shirt is getting dirtier. Germany’s manufacturing data “makes for uncomfortable reading.”

Much of the glowing press coverage today was focused on the uptick in manufacturing data coming out of China, as reported by the Caixin Manufacturing PMI (Purchasing Managers Index) and the Official Manufacturing PMI, both of which returned to (feeble) growth mode, after having been in contraction mode since November.

We will get to them in a moment. But what got less coverage were the other PMI’s that were also released today, including those of Germany, the US, and Japan. And what is happening in Germany and Japan put China’s upticks into a different light – with the US remaining the cleanest dirty shirt that is now getting dirtier, so to speak.

For all these PMI measures, a value below 50 means “contraction,” and a value above 50 means “expansion.” The IHS Markit/BME Manufacturing PMI for Germany plunged to 44.1 in March, down from 47.6 in February, the lowest level since July 2012 near the bottom of the euro debt crisis.

The report highlighted “a sharp and accelerated decrease in new orders,” with total order books and export orders falling at the fastest rate since April 2009. The reasons spanned the spectrum of “uncertainty surrounding Brexit and trade tensions, a weak automotive sector, and generally softer global demand.”

Manufacturing backlog of work fell as “the fastest rate since mid-2009,” as manufacturers ate up their backlog to keep their factories running.

Employment fell across the sector for the first time in three years: “The decline was only marginal, but it nevertheless contrasted with solid rates of job creation in prior months.”

This manufacturing data for March “makes for uncomfortable reading,” the report mused. “Both total new orders and export sales are now falling at rates not seen since the global financial crisis.”

PMI measures are based on surveys of industry executives whose names and companies are not disclosed. These “panelists” are asked to rate various aspects of their business – new orders, new export orders, employment, backlog, inventories, supply chain delays, input costs, etc. — by whether each of these aspects is increasing or decreasing. Their responses form the sub-indices, which are then combined into the overall headline index (the basis for these charts). PMIs are a boots-on-the-ground view by executives about how their company is being impacted by economic developments.

Note: I put all PMIs below in the same index scale as Germany’s, from 44 to 64, to allow for easier comparisons of the magnitude of the changes taking place in each country.

“Japan’s manufacturing economy ended the first quarter in poor shape, with weaker demand pulling production volumes deeper into contraction,” a the economic backdrop for manufacturers “remains fiercely challenging,” according to the Nikkei Japan PMI. At 49.2 in March – slightly up from February, which had been the lowest in 32 months, the index remains in contraction mode, “thus signaling a further slowdown.” It “rounded off the worst quarterly performance in Japan’s manufacturing sector since Q2 2016” (I put this chart on the same index scale as Germany’s, from 44 to 64):

New domestic orders and new export orders fell further. The decline in export orders was blamed on “weaker foreign sales to Chinese and Taiwanese clients.” Given the decline in orders, production volumes were “cut across the Japanese manufacturing sector for the third straight month” – and though these cuts were “only moderate,” they were “the sharpest since May 2016.”

The outlook “remained underwhelming in March,” bogged down by “global trade fears, the impact of the incoming sales tax hike, and weaker growth in China.”

China: hopes are focused on the government.

The Caixin China Manufacturing PMI ticked up into expansion mode (50.8) in March for the first time since November, with companies signaling “slightly quicker rises in output and overall new work,” and employment increased for the first time since October 2013. Production rose for the second month in a row, “supported by a stronger, albeit still relatively muted, rise in total new work.” But purchasing activities continued to contract (I also put this chart on the same index scale as Germany’s): 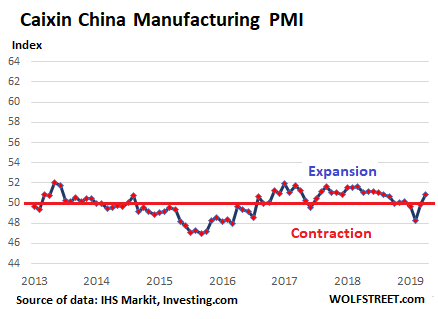 And the report commented about what really mattered (emphasis added): “Overall, with a more relaxed financing environment, government efforts to bail out the private sector and positive progress in Sino-U.S. trade talks, the situation across the manufacturing sector recovered in March.”

The official China Manufacturing PMI, released by China’s National Bureau of Statistics, also squeaked into expansion mode (50.5), after having been in contraction mode since November. “The pick-up in manufacturing expansion came as factories resumed production after the Spring Festival holiday,” the sate-owned CGTN reported (I also put this chart on the same index scale as Germany’s): 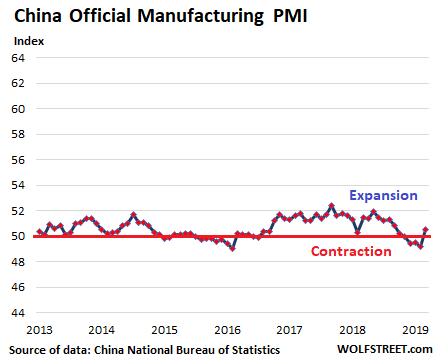 Then there was the division by size: the index PMI of large companies, at 51.1, was still in expansion mode. But the index of small companies and medium-sized companies remained in contraction mode, at 49.3 and 49.9 respectively.

The US: Cleanest Dirty Shirt

The IHS Markit US Manufacturing PMI dipped to 52.4 in March, the lowest reading since June 2017, and “notably softer than the trend seen for 2018” (chart on the same index scale as Germany’s): 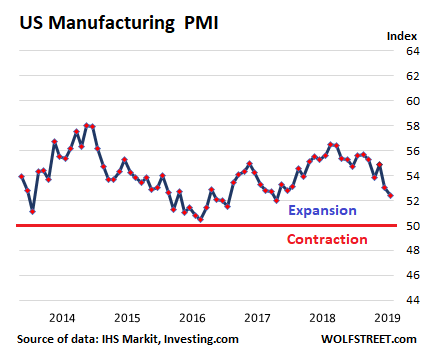 Output expanded at a “marginal pace that was the weakest since June 2016,” based on “softer underlying client demand.”

New order growth “has fallen close to the lows seen in the 2016 slowdown.” Export orders rose only marginally, “with firms noting that global trade tensions and the ongoing impact of tariffs had dampened foreign client demand.” The index for backlogs of work dipped slightly into contraction mode. But the employment index “rose at a solid rate.”

“A further deterioration in the manufacturing PMI suggests the factory sector is acting as an increasing drag on the US economy,” the report commented. And “things may well get worse before they get better, as the forward-looking indicators are a cause for concern.”

But the US service sector, which is far larger than the manufacturing sector, is for now keeping overall economic growth afloat because there cannot be a recession without a pullback in services. Read… Finance & Insurance Hit it Out of the Ballpark, No Slowdown in the Huge Services Sector