Crackdown on lending shenanigans and bank misconduct plus an onslaught of new condos at worst possible time worry the RBA.

The Reserve Bank of Australia has kept its policy rate at the historic low of 1.5% for the 31st month in a row, to do what it can to keep Australia’s housing bubble inflated. But with home prices spiraling down for other reasons, and with households being among the most indebted in the world, the banks are heavily exposed, and now the RBA is beginning to fret about financial stability.

Or rather financial instability, which RBA Assistant Governor (Financial System) Michele Bullock defined in a speech today “as a disruption in the financial sector so severe that it materially harms the real economy.” So, a financial crisis.

A rising pile of housing debt and falling home prices

The big issue in Australia is household debt and inflated property prices. They go together. Most of the household debt in Australia is housing debt. It’s not an issue until property prices start falling, and since late 2017, they have been falling. Bullock offered this chart of the falling home prices. The metros of Sydney and Melbourne constitute well over half of Australia’s housing market by value: 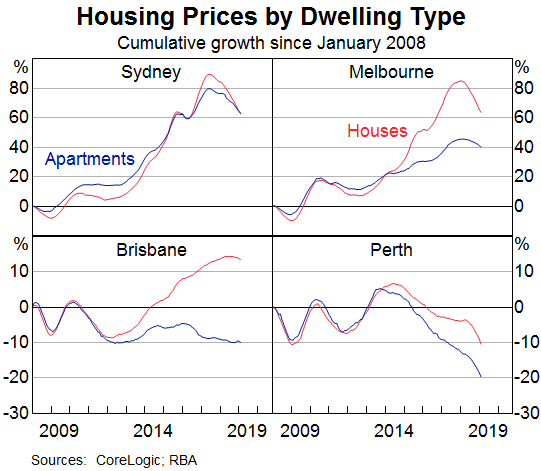 The ratio of household debt to disposable income reached another record of around 190%, Bullock points out. Her chart shows household debt by category, and the total (black line at the top): 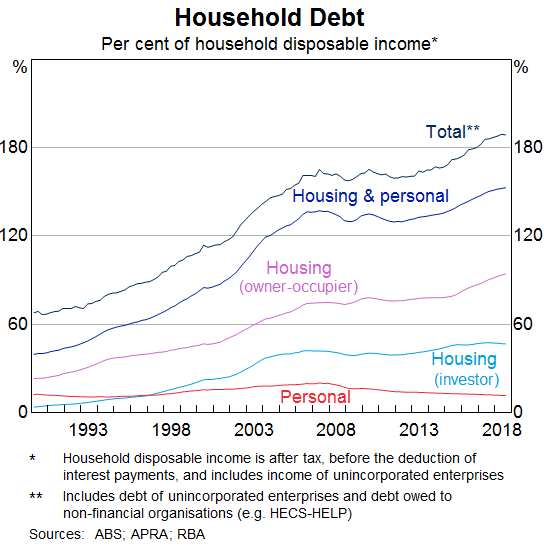 Bullock even names reasons for the surge in household debt – namely the RBA’s own low interest-rate policies and “deregulation” that have “eased credit constraints and increased loan serviceability.” With lower interest rates, folks “have been able to borrow more” and “have been able to pay more for housing.” Hence the housing bubble and over-indebted households, hand in glove.

“The question we are asking ourselves is, given the high levels of debt and falling housing prices, are there any significant implications for financial stability?” Bullock adds: “The answer would be no at this stage – the impacts are not large enough to result in widespread problems in the financial sector.”

The flood of new condos.

In Sydney alone, more than 80,000 “apartments” – what we call condos – have been completed over the past few years, Bullock says, which added about 5% to the existing housing stock. Melbourne and Brisbane have experienced a similar onslaught of new condos. And this rush of supply poses some special risks to financial stability because it depresses condo prices further and pressures developers that might not be able to sell the condos (chart via RBA): 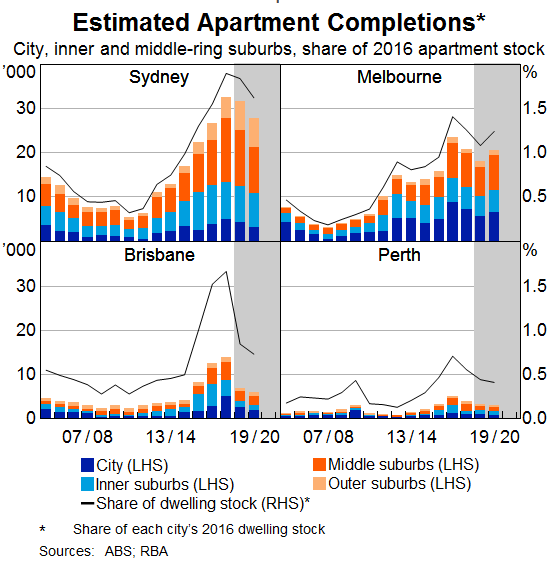 “Our main concern with this from a financial stability perspective is the potential for this large influx of supply to exacerbate declines in housing prices and so adversely impact households’ and developers’ financial positions,” Bullock says.

“By its nature, high-density development can tend to exacerbate price cycles. Large apartment developments have longer planning and development processes than detached housing. Purchasing the land, designing the development, getting approvals through relevant government bodies and then actual construction of the apartment block all take time.”

“In a climate of rapidly rising prices, developers are willing to pay high prices for land on which to build apartments. Households, including investors, are willing to purchase apartments off the plan, confident that the apartment will be worth more than they paid for it when it is finally completed. This continues as long as prices are rising.”

“This large increase in supply, however, ultimately sows the seeds of a decline in prices which, if large enough, results in development becoming unattractive, new supply falling and the cycle starting again.”

There are two financial stability risks associated with this flood of supply, Bullock says:

Household fall into the equity hole: “A decline in apartment prices could negatively impact households that purchased off the plan and are yet to settle. They might find themselves in a situation where the value of the apartment in the current environment is less than they contracted to pay for it. And as market pricing falls, lenders will revise their valuations down and so will be willing to lend less. Households will therefore have to contribute more funds, either from their own savings or loans from other sources.

Developers default on their bank loans: “If people who had pre-purchased are having difficulty getting finance, or decide it is not worth going ahead with the purchase, there would be increasing settlement failures. Developers would be left holding completed apartments, reducing their cash flow and their ability to service their loans, and impacting banks’ balance sheets.”

And then she said the scary words: “Currently, the risks here appear to be elevated but contained.”

Ben Bernanke, as Fed chairman, had infamously said in March 2007: “At this juncture, however, the impact on the broader economy and financial markets of the problems in the subprime market seems likely to be contained.”

But so far, so good, she said:

“Liaison suggests that settlement failures have not increased much and, to the extent that they have, some developers are in a position where they can choose to hold and rent unsold apartments. Further tightening in lending standards might, however, impact both purchasers of new apartments and developers.”

The crackdown on bank misconduct is a financial instability risk.

And then she blamed the regulators and the Royal Commission into Misconduct in the Banking, Superannuation and Financial Services Industry. Their crackdown on the bank lending shenanigans that had been instrumental in creating record household debt and inflating property prices is now creating a credit crunch that is now creating financial instability risks. You can’t make this up:

While the “declining demand for housing credit” is “a more important factor” in the slowing credit growth, she said…

“It is possible that tighter lending standards could be impacting developers of apartments. This could be direct, reflecting banks’ desire to reduce their exposure to the property market, particularly high-density development.

“But it could also be indirect by banks tightening their lending standards for purchases of new apartments, hence impacting pre-sales for developers and their ability to obtain finance. The Deputy Governor noted this in a speech in November 2018 and concluded that this was of potentially higher risk to the economy than household lending standards.”

It would be hilarious, if it weren’t so serious: The RBA says that financial stability risks are caused by this belated regulatory crackdown on lending shenanigans and bank misconduct, when in fact lending shenanigans and bank misconduct made this bubble possible, and it is this bubble that is causing financial stability risks. The RBA should have tried years ago to tamp down on this bubble – rather than trying to inflate it further by cutting its policy rates and keeping them at historic lows.

44 comments for “Risks of Financial Instability “Appear to Be Elevated But Contained”: Australia’s Central Bank on Housing Bust”