How do they measure up against the most splendid housing bubbles in the USA? Oops!

In Greater Vancouver, BC, Canada, house prices fell 0.5% in March from February, the eighth month in a row of declines, according to the Teranet-National Bank House Price Index released this morning. It was the sharpest eight-month decline since February 2013. The index is now down 4.3% from the peak in July 2018. And it’s down 2.1% compared to March last year.

This housing market had been on an extraordinary ride: From January 2002 to the peak in July 2018, the index skyrocketed 316% — meaning that prices more than quadrupled. And some of those gains are now unwinding: 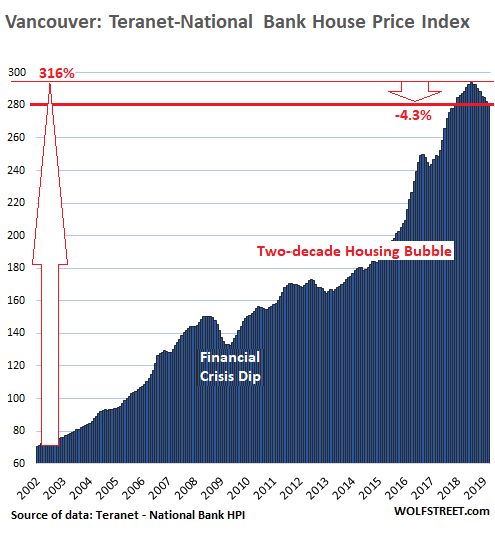 Canada’s housing markets barely dipped during the Financial Crisis when US housing markets ran into deep trouble, causing the Mortgage Crisis that begat all kinds of other crises. Canadian homeowners and banks watched the mess from across the border and shook their heads. But now, after an 18-year housing boom, the downturn has arrived in Vancouver and Toronto, among the formerly hottest housing bubbles in the world.

The Teranet-National Bank House Price Index tracks single-family house prices, based on “sales pairs,” similar to the S&P CoreLogic Case Shiller index for US housing markets. It compares the sales price of a house in the current month to the prior sale of the same house years earlier (methodology). Using “sales pairs” eliminates the issues that affect median-price indices. But the median-price data for Vancouver is a lot more disconcerting than the Teranet data.

The Teranet-National Bank HPI and the Case Shiller Index are both based on “sales pairs” and are comparable metrics. So I converted the index data of both into “percent change from January 2002.”  Same data, but denominated in “%-change.” Even the individual charts look the same. This allows me to put both indices on the same %-change scale on the same chart. 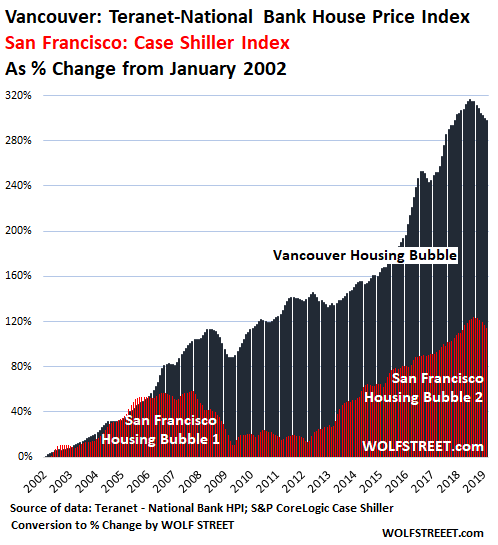 From January 2002 through the peak in July 2017, the index soared 218% — meaning that house prices more than tripled. But that pales compared to Vancouver, where house prices more than quadrupled. I left the charts on the same scale, and so the Toronto chart below shows more white space. Note the totally crazy spike from January 2016 through July 2018, topping out at a 40% year-over-year gain: 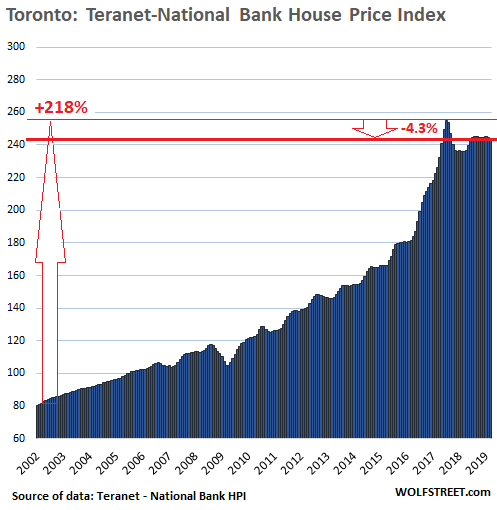 I converted this Teranet index for Toronto house prices to “percent-change since January 2002” and overlaid the insane mind-boggling housing bubble in the San Francisco Bay Area, and it shows just how majestic the 18-year Toronto housing bubble has been: 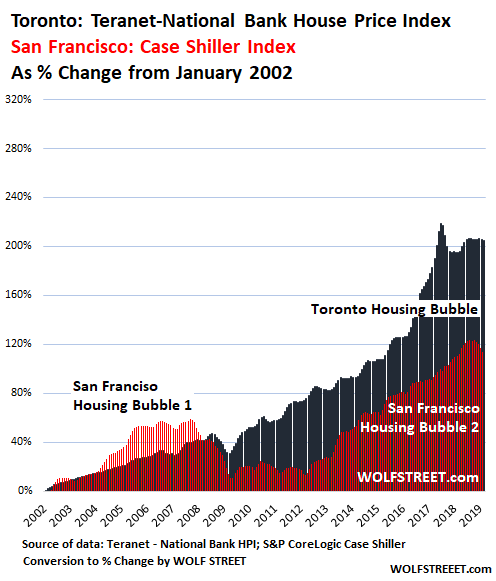 House prices in the Winnipeg metro area dropped 0.3% in March, and are down 2.2% from the peak in September 2018, according to the Teranet House Price Index. It remains up 189% from January 2002, and that gain blows away San Francisco. Note how Winnipeg and San Francisco surged at the same pace from 2002 until 2007, when San Francisco’s housing market came unglued: 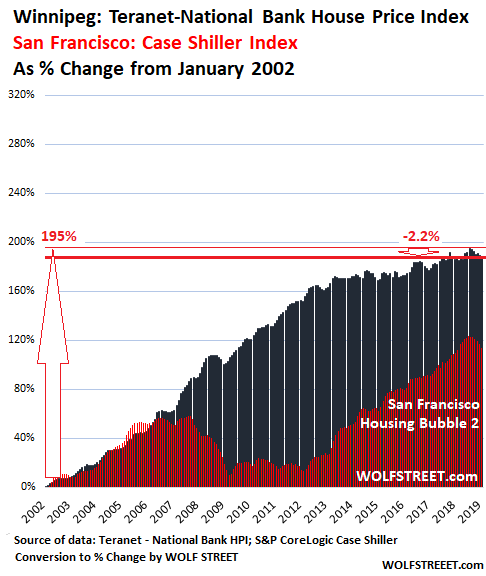 The Teranet House Price Index for the metropolitan area of Montreal inched up to a new record in March and is up 159% from January 2002, without having experienced a noticeable dip over the 18 years. What Financial Crisis? Even this 159% gain, as lackadaisical as it was compared to Vancouver, blows away San Francisco’s gain of 121%. But note how the white space is starting to dominate the chart: 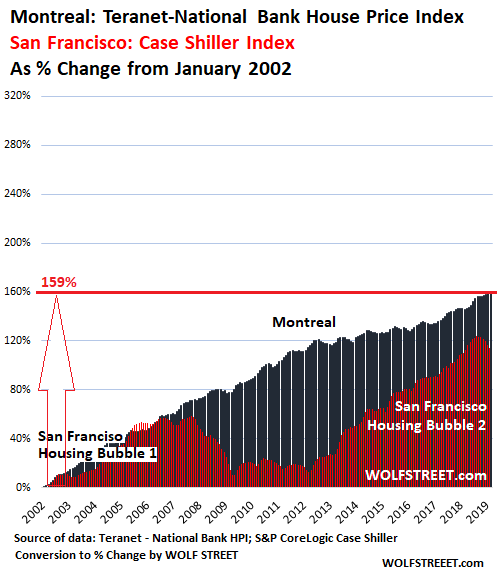 The Calgary housing market is dominated by oil booms and oil busts. When the price of oil collapses, the housing market goes south. House prices surged through the oil boom till mid-2007. When the price of oil collapsed, house prices went south. This was followed by another oil boom that powered the index to a new peak in October 2014, up 140% from January 2002. Then, as oil prices collapsed, house prices began to drop.

In March, house prices fell 0.5% from February and were down 7.0% from the peak in October 2014, according to the Teranet House Price Index. But it remains 123% up from January 2002 and is still beating San Francisco. And white space has taken over: 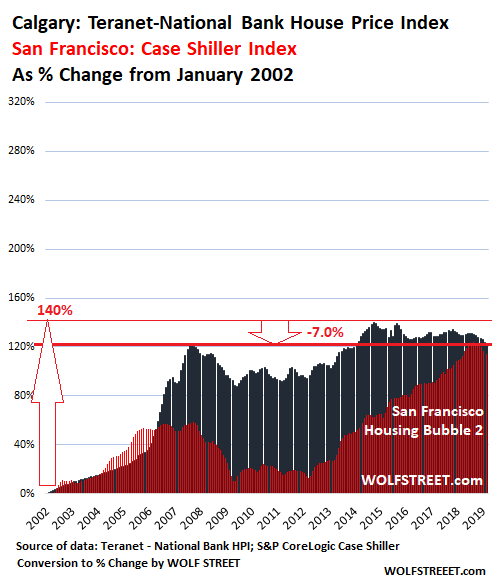 109 comments for “The Most Splendid Housing Bubbles in Canada Deflate”