One customer at a time. But I doubt there are other options.

Here is another example. I swim in the San Francisco Bay and need something to keep my goggles from fogging up. Once you figure out what gets you through your open-water swim without your goggles fogging up, you stick to it. Some people use baby shampoo. Others spit into their goggles. Others buy specialized products. There are lots of choices. I have one that works for me, and I’m sticking to it.

So last week, I drove to my nearest sporting goods store. It’s a good distance away; the store in my part of town closed years ago. The store carried two types, the one I buy, and the one by a big-name company that I tried but didn’t like. When I got to the store, I found out they don’t carry my brand anymore. They only carry the big-company brand. I’d wasted time and gasoline. Once back home, I ordered it online directly from the manufacturer in the US. It arrived via USPS in my mailbox today. And this was likely the last thing I’ll ever try to buy at a brick-and-mortar sporting goods store. I’m not the only one: 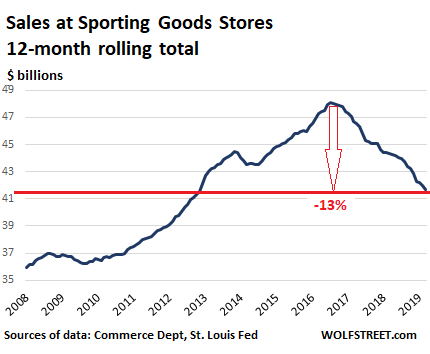 The chart above  shows sales at brick-and-mortar sporting goods stores as a rolling 12-month total (to iron out the enormous seasonality).  From the 12-month-total peak in July 2016, sales have now dropped 13% – and it’s not because people suddenly stopped buying sporting goods. It’s because they’re buying them increasingly online.

A few years ago, I walked to Macy’s Men’s Store by Union Square to buy the same brand and type underwear I always bought there. But they didn’t have it anymore. They’d cut their inventories. And staff was nearly absent. The cost cutters had taken over from the merchandisers. It was obvious. And they’d wasted my time.

Once back home, I went online, found a new brand, and bought from the company that makes them. It took five minutes. And that was the last time I tried to go to a brick-and-mortar store to buy clothes. Our last effort to buy sheets at a brick-and-mortar store ended the same way, online, with the best sheets we’ve ever owned, at about one-third of the cost of the prior set. None of these deals involved Amazon.

Cost-cutting by reducing inventories and getting rid of staff is the fastest way of killing a brick-and-mortar store.

The Macy’s Men’s Store was shut down and sold to an office developer recently. The City, trying to keep some retail in what used to be the retail center of San Francisco that draws a lot of tourists, specified that the first three floors would have to be retail, including restaurants, otherwise it would all have been converted to office. We’ll see how that turns out.

The internet has an unlimited inventory, and what took two hours and often without success, now takes five minutes, success nearly guaranteed. It’s not even necessarily a matter of price – though comparison shopping is infinitely easier on the internet. But it’s just so much easier and faster. So here is what is happening to sales at department stores:

Nordstrom reported quarterly earnings this week. It’s the only major retailer I know of that started reporting enough figures for its “digital sales” to where you can calculate the actual dollars (on a rounded basis). Other retailers keep that a secret because it would show just how terrible their brick-and-mortar stores are doing.

And this is where Nordstrom was with its “net sales,” which include everything but revenues from credit-card interest and fees:

So digital sales jumped 7% and brick-and-mortar sales fell 7.5%. It doesn’t take long before the stores are toast.

This has been going on for years. During the quarter of the holiday shopping spree, 33% of Nordstrom’s sales were digital.

These retailers are trying desperately to obfuscate to what extent dollar revenues at their stores are slumping. But they do want to brag about the online sales successes. Hence the twisted metrics.

Walmart, in its quarterly earnings report, said that its “eCommerce” sales in the US soared 37%. This is a huge increase. But total net sales in the US, including eCommerce, only rose 3.3% to $80 billion.

So let’s do a little speculation because Walmart refuses to supply the data: If just 15% of its US sales are eCommerce, so $12 billion, and if they’re up 37% from a year ago, eCommerce sales increased by about $3 billion. And its brick-and-mortar sales would have fallen by 0.5%.

Macy’s reported last week that net sales fell 0.6% to $5.5 billion, despite “double-digit” growth in its digital business, which is all it said about it. It’s up to you to guess whether its digital sales grew by 10% or 37%.

Target also reported quarterly earnings this week. It said that “comparable digital sales” soared by 42%. It didn’t indicate dollars, but it said that digital sales growth was responsible for 2.1 percentage points of the 4.8% growth in its total “comparable sales.”

All successful retailers spend enormous amounts on building out their e-commerce operations, including the brick-and-mortar component of e-commerce, the fulfillment infrastructure.

At the same time, they’re cutting cost at their brick-and-mortar operations, trimming inventories and staff and closing stores, and making it more inconvenient, more time-consuming, and more frustrating to buy at these stores.

Each time a disappointed customer ends up buying online what they’re looking for, only to discover just how easy it is to buy shoes or defogging liquid or a dishwasher or a couch or an armoire online, retailers run a good chance of permanently shifting this customer to the internet. No Amazon Prime required. The choices are endless.

People have often asked me how long this shift to online can continue, and some people have suggested that this is a bubble that will eventually implode and revert to brick-and-mortar.

Other retailers go bankrupt and get liquidated, and many of their loyal customers switch to buying online rather than trying to find another store. And so it goes. Each time a consumer buys more online and less at the store, retailers respond by making online better and by making their stores worse or by getting rid of them, and it just speeds up the process.

There is no telling when this shift in how Americans buy will reach some kind of logical conclusion, and what will be left of brick-and-mortar stores that can thrive in another 25 years, because that’s how long it has taken to get this far.