The average asking rent on Madison Avenue between 57th Street and 72nd Street, a prime shopping corridor in Manhattan, plunged 25% over the past 12 months, to $1,039 per square foot per year, and is down 37% from three years ago, according to the Manhattan Retail Report by the Real Estate Board of New York (REBNY): 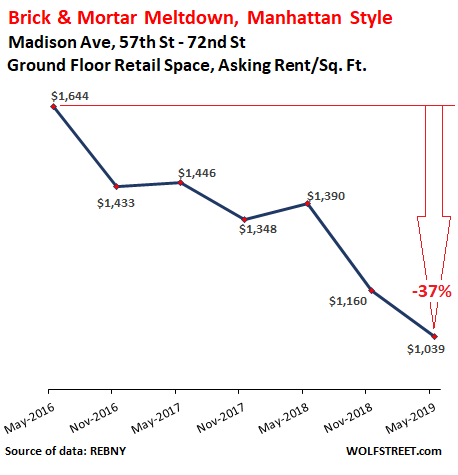 With these slashed asking rents along with concessions, such as buildouts and flexible lease terms, landlords are now trying to attract tenants for their vacant retail spaces that are now densely dotting the major shopping corridors in Manhattan. The entire report is focused on ground-floor retail spaces.

Out of the 17 shopping corridors in Manhattan that REBNY tracks, rents fell in 12 of them. Rents on Madison Avenue showed the steepest year-over-year decline. But in terms of the three-year window going back to May 2016, rents in other corridors fell even further.

The principle is this: Brick and mortar retail – outside of gas stations, grocery stores, and auto dealers, accounting for about half of total retail sales – is under heavy pressure from online competition. The last thing these under-pressure retailers can handle is sky-high rents.

This is an issue in other expensive cities as well, such as San Francisco, where shuttered and vacant retail shops are everywhere. What happens is that after a 10-year commercial lease expires, the landlord doubles the rent, and the retailer or restaurant, knowing the revenues the business generates, says, forget it and leaves. And then the shop sits vacant. This happens time after time.

The way forward: slashing rents to where businesses can make the numbers work out. And this is now happening in Manhattan. Concerning the Madison Ave corridor, REBNY says:

High availability rates along the corridor have led owners to continue lowering their rents and offer more short-term lease agreements. Flagship retailers across the prestigious strip are taking advantage of the softening rents by either locking in long-term lease agreements, moving to smaller-sized spaces, or migrating further south.

And just when America’s brick-and-mortar shopping tradition is under relentless and brutal attack from e-commerce, more retail availability is being created, with immaculate timing. REBNY:

Amid these new, prominent retail availabilities, property owners are facing pressure to reprice existing vacant retail spaces at lower asking rents. As a result, many owners are also offering greater flexibility to prospective tenants in the form of shorter-term deals, concessions, and build-outs. 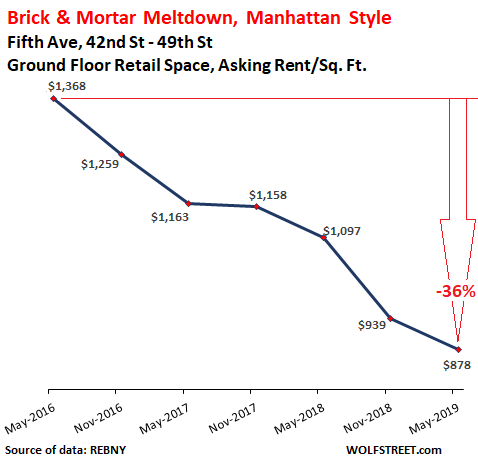 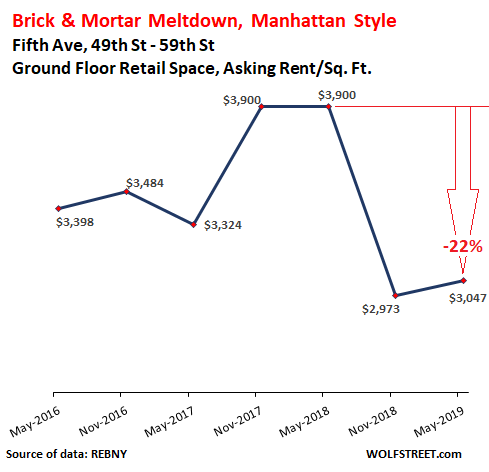 This decline is attributed to both historically high availability rates and low absorption rates, as high asking rents are diminishing tenant demand. Despite instances of rent reductions, newer owners who purchased spaces at peak market rates are slow to adjust their prices and are struggling to fill vacant spaces.

In this corridor in the West Village, the average asking rent has collapsed by 43% over the three years since 2016, to $294 psf. 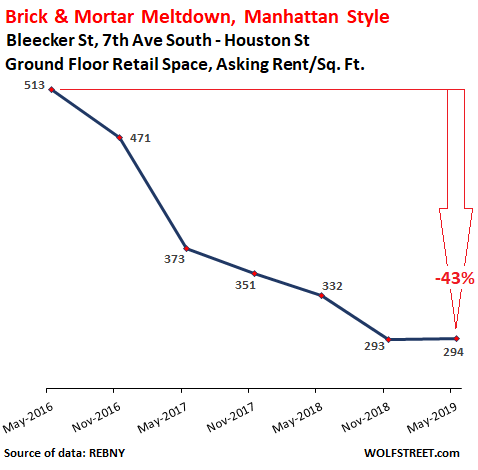 The average asking rents fell 9% year-over-year to $365 psf, “due to more expensive retail spaces along Lexington Avenue being recently leased out by Old Navy and JP Morgan Chase with remaining availabilities along the corridor being located further eastwards where rents tend to be lower,” the report said: 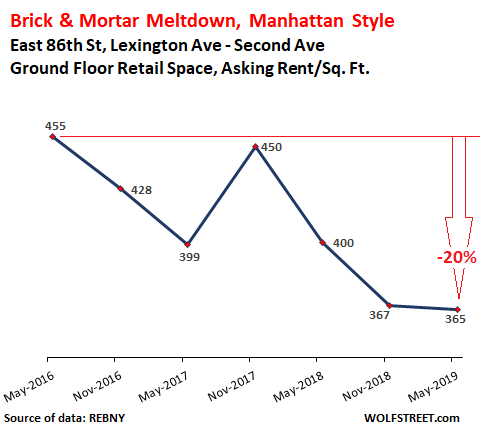 In this Harlem corridor, the average asking rent jumped 10% year-over-year to $137 psf, “attributed to several new spaces west of Fifth Avenue that came to market at the end of 2018, where rents tend to be higher compared to the east side. Deal-making along the corridor has remained steady with new tenants including Shake Shack, Whole Foods Market, Victoria’s Secret, and Bath & Body Works.” The average asking rent remains down a smidgen from 2016: 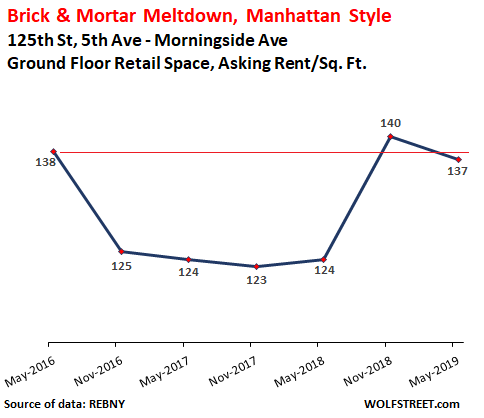 The average asking rent dropped 8% year-over-year to $279 psf, the third year in a row of declines. Over the three-year period, the asking rent has plunged 31%. REBNY says that the “price corrections” have actually “been ongoing since 2015”: 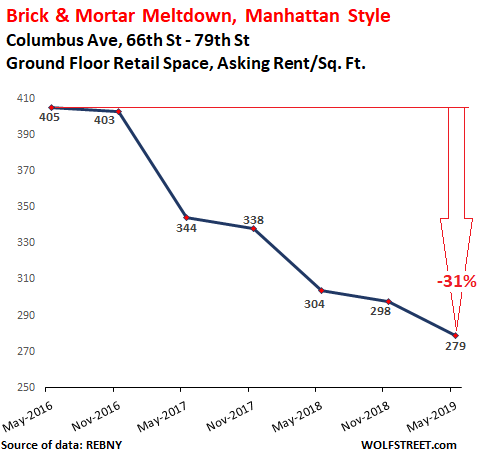 This corridor cuts through the Financial District, crosses Wall Street, and goes up to City Hall. It has undergone a huge change in recent years with major redevelopments all around, including numerous large residential developments in what used to be an area dominated by offices. Perhaps it was an outlier: The average rent jumped 19% in the six months from November to May, after it had dropped in the prior 12 months: 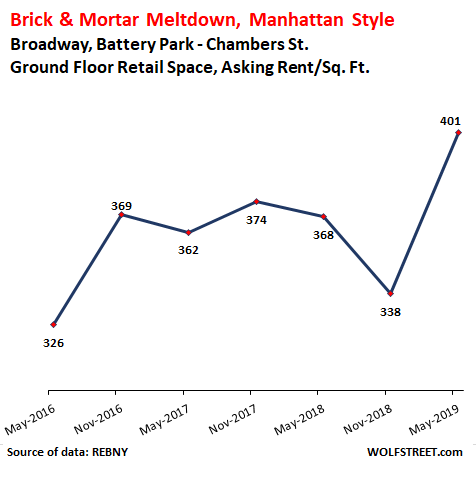 Tourists, daytime workers, and nearby residents flock to the corridor for attractions such as The High Line, Google’s corporate campus, Chelsea Market, and Gansevoort Row. With this high foot traffic, 14th Street is viewed as the prime location for “experiential retail” concepts that cater to customer experiences, pop-up shops, fashion, and food and beverage stores.

Nevertheless, despite Google and all this enthusiasm about “experiential retail” concepts and what not, the average asking rent has dropped 20% over the past three years: 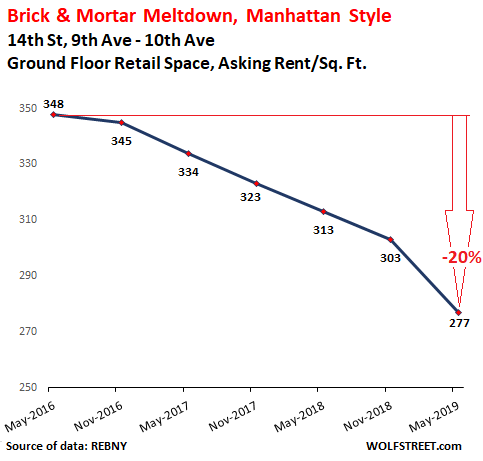 Price can fix a lot of problems. And there is always the other side – the very crucial other side: “Declining rents have fostered a healthier environment as more retail space is being absorbed at an affordable rate,” the report said. Because the easiest way to wipe out a majority of retailers on a street and then gaze at shuttered and vacant stores is to get greedy and try to obtain rents that the business cannot bear. At least a partial fix is to slash rents – and that’s finally happening.