Stocks were already gunning for the worst May since 2010 when, on the evening before the last trading day, Trump tweeted that he would impose tariffs on imports from Mexico, if Mexico doesn’t crack down on migration flows coming through its southern border. Those tariffs would hit the automakers particularly hard because they imported 2.6 million vehicles from Mexico in 2018, up 10% from the prior year. Not even counting the component makers. But the Presidential tweet was just the icing on the cake. May had been crappy for stocks before the tweet went out.

The S&P 500 index, which earlier this week had fallen through 2,800, dropped another 1.3% today to 2,752, down 6.8% from its peak in early May that had exceeded by a hair the prior peak of September 2018. The index is now back where it had first been on January 9, 2018, having spent nearly 17 months going nowhere, despite intoxicating surges and nerve-wracking drops. And the chart is morphing from “not pretty” to something a little uglier (data via S&P Dow Jones Indices): 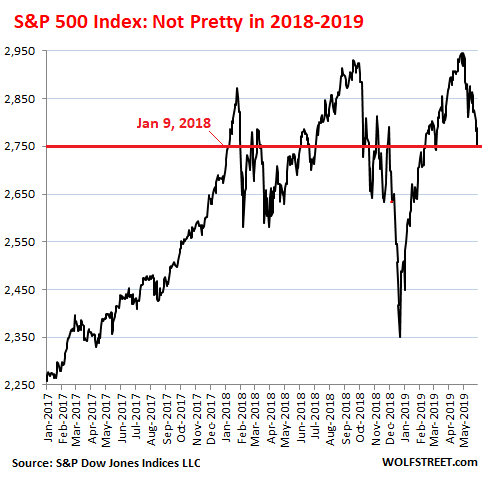 The Dow Jones Industrial Average fell 1.1% today, unceremoniously plopping through the 25,000 level and closed at 24,815. It’s now 7.9% below its October 2018 peak and right back where it had first been in December 2017, having spent 17 months gyrating to nowhere, including a 19% peak-to-trough plunge in four months followed by a blistering 22% rally in four months. 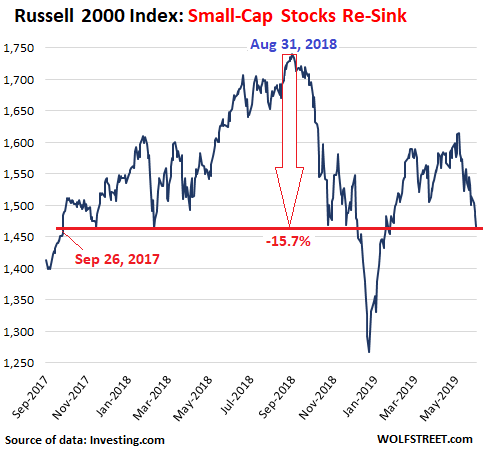 But don’t just blame the tweet: By Thursday evening, GM shares were already down 10% for the month of May. Friday’s dive took this loss in May to 14%.

My FANGMAN index – the combined market cap of Facebook, Amazon, Netflix, Google’s parent Alphabet, Microsoft, Apple, and NVIDIA – fell 2.0% today and is down 8.7% in May.

Since April 29, the FANGMAN index has dropped 10.4%, giving up over one third of the blistering post-Christmas rally in just one month. The index is now back where it had first been on May 31, 2018, having gone exactly nowhere in one year despite these brain-twisting surges and plunges (market cap data via YCharts): 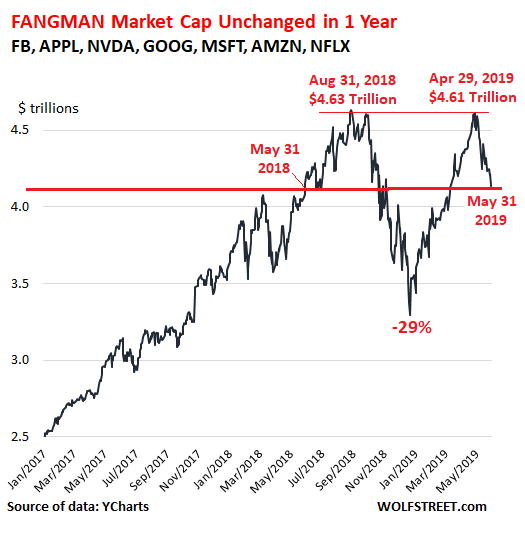 Here is how the FANGMAN components did:

It’s not helpful that unit sales of its flagship product line, the iPhone, have been dropping, and that it is now trying to sell more services instead, as iPhone sales are getting battered by cheaper competitors in a stagnating market.

So thankfully that Microsoft is included in my FANGMAN index. Without the “M,” the “FANGAN” index did a lot worse: down 15.5% from its peak on August 31, down 12% from its turnaround point on April 29, and back where it first had been on January 25, 2018. A volatile, but overall orderly unwind.

The economy is in a “very good place,” says Trump’s man at the Fed. And the Fed’s favorite inflation measure ticks up. Read…  American Consumers Prop Up the Economy. Wall Street Clamors for Multiple Rate Cuts. Fed Blows Off Wall Street