But then there’s the “average transaction price.”

A new 2019 Ford Taurus, with a sticker price “starting at” $27,800, is a better car in myriad ways than a new 1996 Taurus was at the time, with a sticker price “starting at” $17,995: quality, equipment, performance, comfort, safety, etc. In other words, the model has gotten a lot better over the 22 years, and the price has surged by 55%. So far so good. And this is typical for all models that have existed this long.

But today, the Bureau of Labor Statistics, when it released its Consumer Price Index (CPI), explained that prices of new vehicles, per its CPI for new vehicles, showed 0% inflation in January compared to January a year ago, and that in fact, confusingly, prices have been essentially flat over the past 22 years: 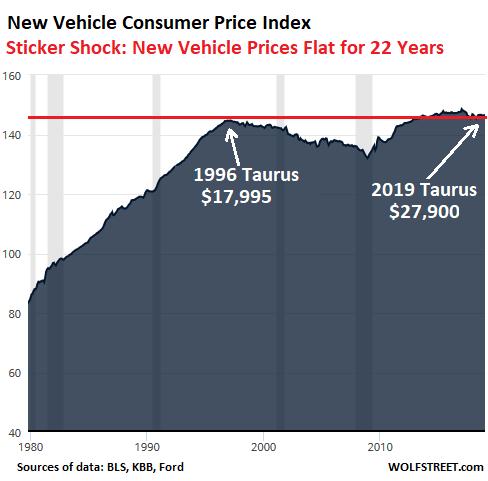 Note the 12-year time span of declining new-vehicle prices between the end of 1996 and the end of 2008. While real car buyers were getting treated at nearby hospitals for “sticker shock” over those years, the CPI for new vehicles miraculously declined.

There’s another period of such price declines, according to CPI: From January 2017 through January 2019, CPI for new vehicles declined by 1.2%.

Alas, over the same two years, from January 2017 through January 2019, the “average transaction price” – a common industry metric that tracks the price at which the dealer sells the new vehicle to the consumer after all haggling – rose 6.2%. 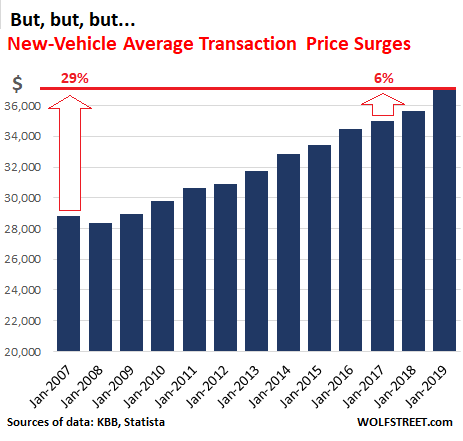 The reason for the discrepancy – 22 years of essentially 0% inflation for new vehicles and surging new vehicle prices in real life – are some adjustments that conceptually make sense to some extent but practically lead to these absurd results.

The CPI for new vehicles currently weights 3.7% in the basket of all goods and services in the overall CPI for urban consumers (CPI-U). It’s one of the reasons why inflation as measured by CPI remains low, even as consumers are shelling out more and more money to buy what they need.

These adjustments that bring down CPI include “hedonic quality adjustments.” They’re not a secret. The Bureau of Labor Statistics explains how they’re derived for new vehicles:

Quality adjustments are based on resource cost provided by manufacturers in categories such as: reliability, durability, safety, fuel economy, maneuverability, speed, acceleration/deceleration, carrying capacity, and comfort or convenience. Adjustments are also made when equipment is added or deleted from the tracked model.

Hedonic quality adjustments are also applied to other items, such as consumer electronics. Conceptually, they make sense. The smartphone today is an incomparably more capable device than a cellphone was in 1996.

And I get that. There is just no comparison between a 1996 Taurus when it was new, and a 2019 Taurus. At every level, today’s vehicle is far superior, and there is a price attached to these improvements. But I can no longer buy a new 1996 Taurus for $17,995. That choice doesn’t exist.

So the BLS prices these improvements and converts them into adjustments and applies them to CPI, product by product. But there is also a lot of leeway to do what consumers can feel under their skin is being done, particularly when they get sticker shock: That these adjustments are carried purposefully just a little too far, every year, year after year, item by item, in tiny increments that are additive and eventually add up.

If core CPI rises 2.2% year-over-year across the US, as it did in January, after 20 years, core inflation would amount to 54%. But if a more accurate representation of inflation should have been 3.2% per year, then after 20 years, inflation amounts to 88%. And eventually, you’re talking about some real money.

Automakers risk losing control over core technologies and face the commodification of cars and trucks. A generational shakeup is coming at the auto industry. My take on the inevitable… THE WOLF STREET REPORT