The hope in early January has been unwound.

Today, the Mortgage Bankers Association (MBA) reported that its purchase mortgage index – which tracks applications (not approvals) for conventional and government mortgages to purchase a single-family house – fell 6% from the prior week and was down 5% from the same week last year – despite falling mortgage rates, which should have cranked up home buying and mortgage activity. It was the fourth week in a row of drops: 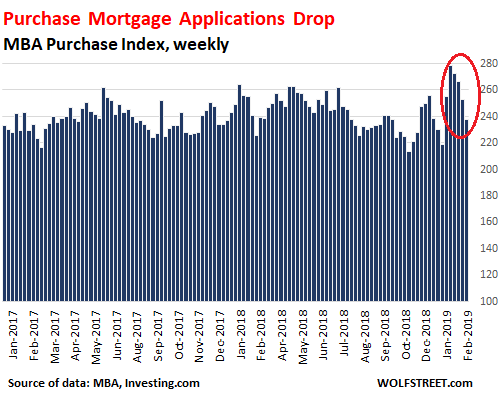 The Purchase Mortgage Index is considered a reliable indicator of impending home sales, and so this decline, given the lower mortgage rates, mystifies the industry.

“Application activity fell last week – even with rates decreasing – as renewed uncertainty about the domestic and global economy likely held potential homebuyers off the market,” said MBA Associate VP of Industry Surveys and Forecasts, Joel Kan, in the report. “The 30-year fixed-rate mortgage dropped to its lowest level since last March, and was 52 basis points lower than its recent high last November,” he said.

You can practically hear between the lines, so to speak, the bafflement in his voice about this decline in purchase mortgage applications in light of the decline in mortgage rates. The MBA also reported today that the average interest rate for 30-year fixed-rate mortgages with conforming loan balances inched down to 4.65%, back where it had been last April (chart via Investing.com): 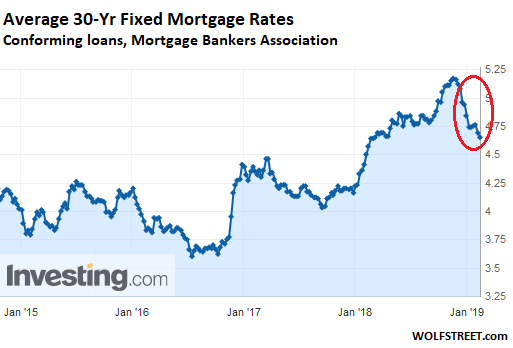 In the overall scheme of things, the MBA Purchase Mortgage Index remains way down from the peak mortgage craziness during Housing Bubble 1 (chart via Investing.com): 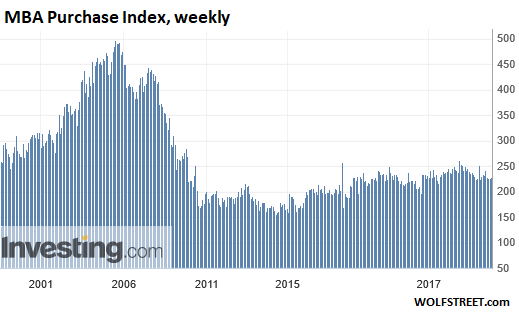 The MBA Refinance Mortgage Index has reacted in a very muted manner to the lower interest rates this year, after having fallen steadily since October 2017 as mortgage interest rates were rising. 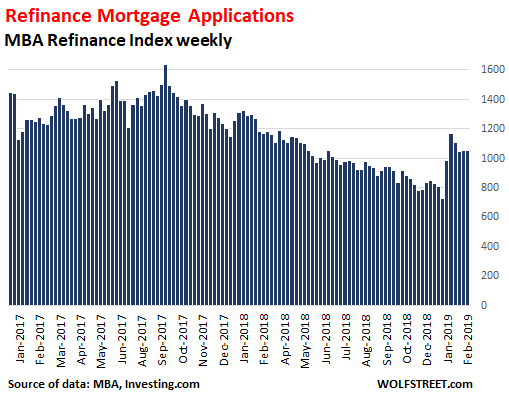 Seen over a longer period of time, mortgage refinancings are down by over 50% from 2016 and are just a shadow of their former magnificence during the mortgage craziness earlier this century (chart via Investing.com): 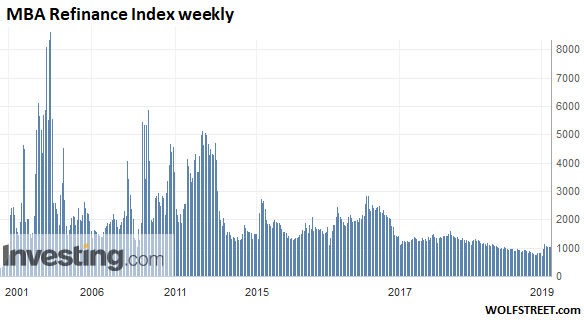 But don’t blame the government shutdown for the lousy mortgage applications activity. The MBA said that “government refinances provided a bright spark, picking up over 10%, as both FHA and VA refinancing activity saw increases over the week.”

The share of applications for adjustable-rate mortgages ticked down to 7.5% of all mortgage applications. They’d essentially disappeared from the mix of mortgage originations by 2009, since no one wanted to touch them, not even with a 10-foot pole, given the role they played in the mortgage crisis, During the peak of the mortgage craziness in 2005, over one-third of all mortgage originations came with adjustable rates. So at a share of just 7.5%, they’re back where they’d been in the 1990s.

Note, however, that various forms of adjustable-rate or variable-rate mortgages dominate in many countries, including Canada, Australia, Spain, and others, that have become known for their blistering housing bubbles, and in Spain’s case, also a devastating housing bust.

In New York City, 52% of the homes listed for sale last spring still have not sold. For sellers, “the situation calls for a clear strategy: cut prices.” Read...  Liquidity in New York City’s Housing Market Dries Up