“A development that is surprising during a strong economy and labor market”: New York Fed

Serious auto-loan delinquencies – loans that are 90 days or more past due – surged to 4.47% of total auto loan balances in Q4 2018, according to New York Fed data this morning. This put the auto-loan delinquency rate at the highest level since Q1 2012 and just 0.6 percentage points below the peak during the Great Recession in Q1 2011. 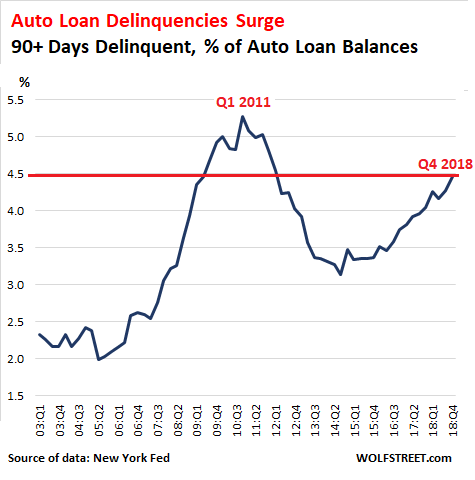 At the end of 2018, there were over 7 million Americans with auto loans that were 90+ days past due, 1 million more than at the end of 2010, at the peak of the overall delinquency rates, according to a separate report by the New York Fed. It added that “the substantial and growing number of distressed borrowers suggests that not all Americans have benefitted from the strong labor market.”

The dollars are big. Since the prior peak in Q2 2008, total auto loans and leases outstanding nearly doubled to $1.27 trillion (this is slightly higher than the data reported last week by the Federal Reserve Board of Governors as part of its consumer credit data).

The chart below shows the dollar amounts of auto loan balances (blue columns, right scale) in trillion dollars and the number of auto-loan accounts (red line, left scale) in millions of loan accounts: 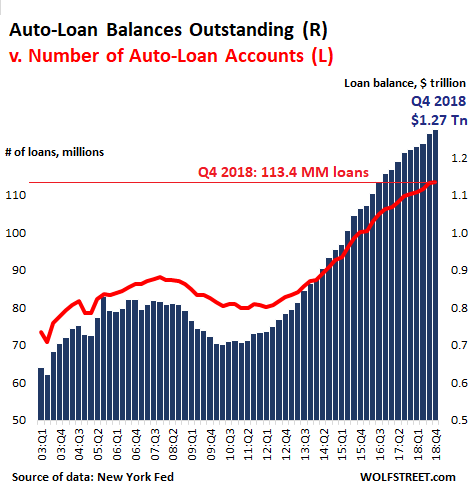 The percentage of vehicles financed, as compared to the total number of new and used vehicles sold, has remained roughly steady between 50% and 60% over the decade, according to the New York Fed. The remaining vehicle sales were paid for in cash.

The share of total auto loans outstanding that was originated to subprime borrowers – with a credit score below 620 – inched down to a relatively low 22%. However, the New York Fed pointed out, as auto loans have surged, that:

Hence the 7 million Americans with auto loans that are 90+ days delinquent.

And the flow of loans into serious delinquency is picking up steam. The share of loans that were current or in early delinquency in Q3 and became seriously delinquent in Q4 ticked up to 2.4% of total auto loan balances.

But among subprime auto loans, the share of loans that transitioned into serious delinquency rose to over 8% of their balances in Q4, “a development that is surprising during a strong economy and labor market,” the New York Fed added.

There are about $273 billion in subprime auto loans outstanding. So who has originated them?

Specialized auto finance lenders – among the many non-banks or “shadow banks” – have piled into this sector most aggressively. While they originated only about $150 billion of all outstanding auto loans, half of their loans ($75 billion) are subprime.

These are auto-loan balances by originating lender type, and not necessarily who owns them. Auto loans that are securitized are held by investors. And specialized auto lenders try to securitize most of their loans.

“Captive” auto lenders, such as Ford Motor Credit, originated $281 billion in auto loans, but only 19% of them were subprime. Small banks and credit unions had the lowest risk profile, with only 14% of their loans rated subprime. But credit unions are the second largest auto lender after big banks: 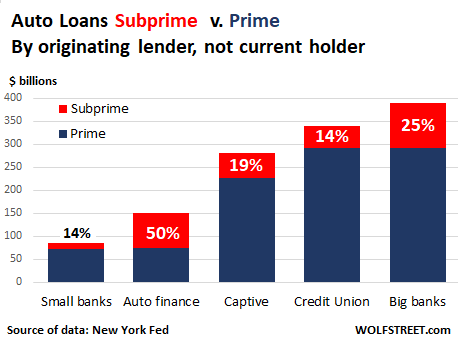 So who gets in trouble over subprime auto loans?

Not the credit unions, with their clean loan book: only 0.7% of credit union auto loans are 90+ days past due. And not the small banks and the captive lenders.

The “big banks” – banks with over $500 billion in assets – originated $97 billion in subprime auto loans. But some of those loans were securitized and are now in the lap of investors. The exposure that remains is small compared to the size of these banks. There are only six of them in that group, ranging from Morgan Stanley ($852 billion) to JP Morgan Chase ($2.5 trillion). And each of them is big enough to digest the losses that might occur in the sliver of subprime auto loans it may still hold.

It has been and is going to be a little rougher for specialized auto lenders – a number of which have already collapsed in 2018 – and for investors in auto-loan ABS.

Consumers are doing their job only in a lackadaisical manner. But the student-loan scheme is hot. Read…  The State of the American Debt Slaves, Q4 2018