52% of the homes listed for sale last spring still have not sold. For sellers, “the situation calls for a clear strategy: cut prices.”

Over half the 12,000-plus homes that were listed for sale in New York City on StreetEasy during the peak listing months of March, April, and May 2018 still have not sold as of early February, according to StreetEasy’s review of public records. This “historic wave of homes,” as StreetEasy calls it, arrived last spring “as price growth began to sputter and owners looked to cash out.” But buyers were not in the mood at those prices. And so 52% of the homes have still not sold.

In Manhattan, 56% of the homes listed in March, April, and May 2018 have not yet sold. What makes buyers reluctant are the price declines. The StreetEasy median price index for Manhattan, at $1.132 million in December, is back where it had been in September 2015. For the past six months in a row, the median price index for Manhattan has fallen below the same month a year earlier. These are the first such year-over-year declines since Housing Bust 1. Given the dollars involved in a Manhattan home, those price declines can add up: 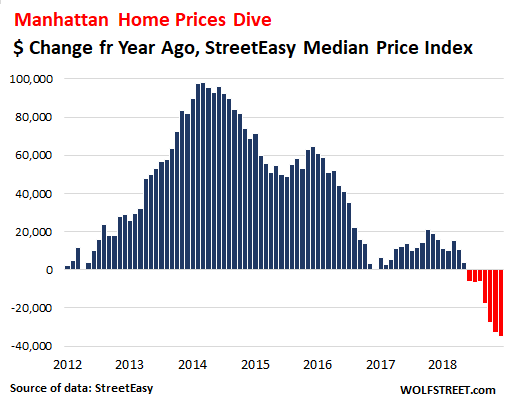 In New York City overall, thanks to price gains in other boroughs, StreetEasy’s median price index was still up 1.7% in December compared to a year earlier.

Across New York City, of the 48% of the homes that did sell since being listed last spring, 70% “sold significantly below their asking price,” StreetEasy said in its study. This is up from 62% over the same time period in 2017 and from 61% in 2016. This time around, the median price cut between initial listing price and recorded closing price (as shown in public records) was 5.5%.

In Manhattan, of the homes that did sell, 77% sold below their initial asking price. And “even in the comparably strong market in Queens, just 54% of homes found buyers.”

Of the homes that sold across New York City, only 19% sold above asking price. They “tended to be among the cheapest in their respective neighborhoods for their bedroom count,” StreetEasy explains in the study. They were put on the market with aggressive asking prices that then created buyer activity. StreetEasy:

The homes that were aggressively priced and then sold above asking price (about 1,000 homes in total) spend four weeks on the market.

But homes that were put on the market with a relatively higher price, but then were sold below asking price spent an average of nine weeks on the market.

The higher the price, the harder it gets:

What did unsuccessful sellers do? Pull the unit off the market.

The report explains: “Most sellers who were unable to find buyers at suitable prices have simply pulled their listings from the market. Of all listings created in spring 2018, 40% are either paused, delisted, or otherwise no longer available on StreetEasy. Only 7.5% of all the listings from the peak months, or 14% of the total unsold units, are still actively seeking buyers.”

A flood of listings for the spring home-shopping season.

With these unsold units lurking in the shadows, and “with inventory levels still near historic highs,” StreetEasy says, “we will likely continue to see heightened inventory heading into the spring home-shopping season, as these sellers try again to find a buyer.”

StreetEasy expects “another large wave of inventory to hit the market again in 2019 – one that will likely include many of the units listed but unsold in 2018.”

And the study has some suggestions:

“For sellers still seeking buyers, then, the situation calls for a clear strategy: cut prices.”

“Sellers may be tempted to hold out in the hope that some buyer will pay far above what others are offering. But with falling prices in many areas of the city, and inventory lingering on the market, such an outcome is highly unlikely. Many are willing to buy, but almost no one will be willing to pay more than what the broader market demands.”

“Buyers, on the other hand, should note the importance of doing their research. Pay special attention to how listing prices compare to neighborhood benchmarks…. Be picky, be patient, and be prepared to negotiate.”

Liquidity dries up when prices fall.

And this is what sellers in New York City are re-learning: Liquidity in a housing market exists only when the market is hot and prices rise. When bidding wars break out, anything sells, at just about any price, which causes prices to surge further.

But when the mood changes, and prices begin to fall, liquidity just evaporates. And homes sit on the market and simply fail to sell – as in New York City, with 52% of the homes listed last spring still not having sold.

But there is always liquidity somewhere, just at lower prices. To find that liquidity, sellers have to lower their aspirations and cut their asking prices. Liquidity is where the willing and able buyers are. Cut the price enough – and that’s valid for most assets – and you will find liquidity. And as buyers see those lower transaction prices in their neighborhood, they pull back further, being, as StreetEasy suggests, picky, patient, and prepared to negotiate.