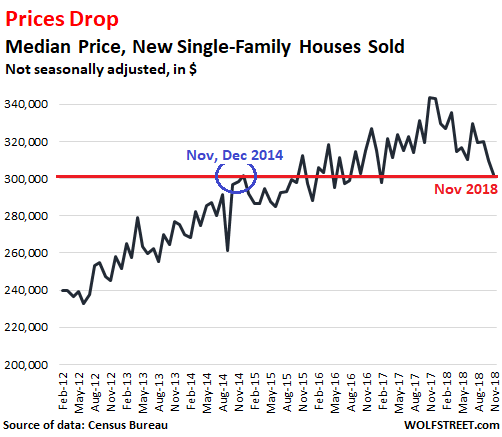 This new-home sales data – produced jointly by the Census Bureau and the Department of Housing and Urban Development – is very volatile, and subject to revisions in the following months. But after a while, and despite the jumpiness of the data, as the above chart shows, the trend becomes clear. 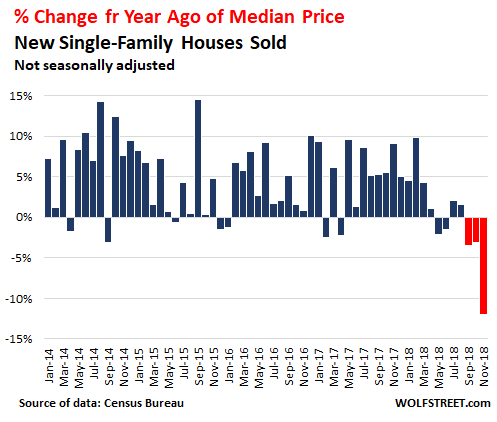 Just how far prices have ballooned before they began to deflate becomes apparent in this long-term chart of the median price of new houses. At the price peak in December 2017 ($343,300), the median price was 31% above the crazy bubble peak in March 2007, before it all blew apart: 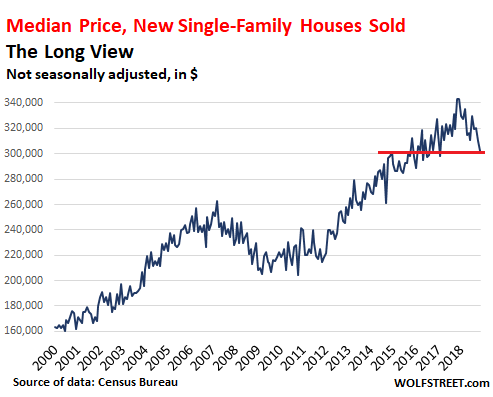 What are the dynamics of this bedraggled market?

Sales of new single-family houses across the US in November fell 7.7% from November 2017 to a seasonally adjusted annual rate of 657,000 houses, which wasn’t too bad, but it was the third month in a row of year-over-year declines (September, October, November 2018 in red): 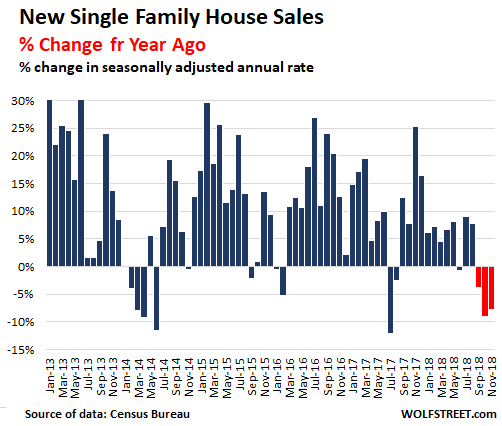 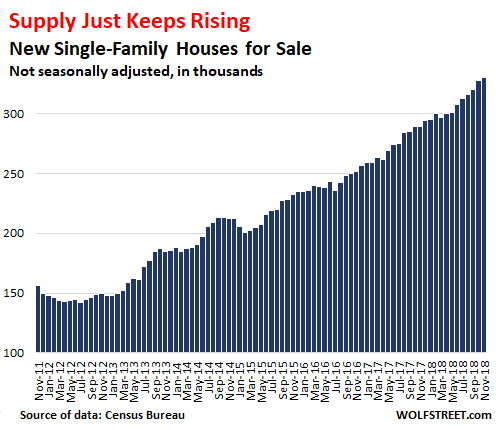 What is particularly interesting is how much faster and further the median new-house price has fallen compared to the median price of “existing homes.”

Though the median price of “existing homes” – single-family houses, townhouses, condos, and co-ops – in December was down 7.4% from the peak in June, on a year-over-year basis, it was still up 2.9%. And this, despite a 10% year-over-year drop in sales volume, the biggest such drop since May 2011.

The biggest homebuilders are large stock-market traded companies that have to maintain their sales momentum, no matter what. Through their reach across markets, they have good current market data and know where the market – the buyers – is going. And when buyers don’t materialize at a given price point, then incentives are thrown in, such as free upgrades in the kitchen, and eventually prices get cut a tad, and ultimately less costly homes get built to meet the buyers.

A homeowner or investor who is not forced to sell might pull the home off the market if it doesn’t sell within a few months, and later put it back on the market, and dilly-dally around for years sometimes – though massive job losses, as they occurred during the Financial Crisis, can speed up that pace dramatically.

By contrast, homebuilders have to make sales happen, no matter where the market is. They continue to build homes, and they have to sell homes whatever the market conditions may be. They cannot just wait for a few years until the market turns their way. And so they’re the first to adjust to the reality of the market.

“Dripping down, down, down. Frustrating that the housing market is not recovering,” said the chief economist at the National Association of Realtors. Read…  Home Sales to Get Even Uglier in Near Future