“Dripping down, down, down. Frustrating that the housing market is not recovering”: National Association of Realtors

What will home sales look like in January and February? Very, very lousy, according to pending home sales, a measure that counts how many contracts were signed. Contract signings run roughly one or two months ahead of when the sales close and are reported as sales. The measure of pending home sales for December projects actual home sales in January and February. To that tune, the National Association of Realtors (NAR) said that its Pending Home Sales Index for December fell to the lowest level since April 2014: 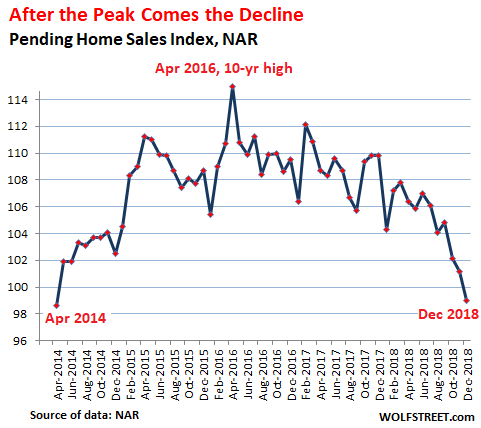 “It’s been dripping down, down, down,” NAR chief economist Lawrence Yun said in the interview. “Frustrating that the housing market is not recovering.”

To show the acceleration of the declines of contract signings toward the end of the year, I marked October, November, and December in red: 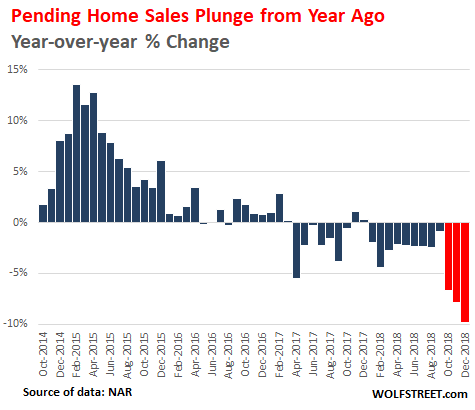 The NAR’s report blamed the stock market swoon that had sapped consumer confidence, unaffordable home prices – that, after years of price gains had far outgrown wage gains – and mortgage rates.

The latter is an interesting theory because mortgage rates, after a peak in early November, were falling starting in mid-November and fell throughout December. But NAR’s theory is that the higher rates in October and November discouraged people from going shopping for homes that might have led to contract signings in December. And Yun hopes that the December signings mark the “cyclical low.”

Nevertheless, the decline in mortgage rates wasn’t exactly huge. The average 30-year-fixed-rate conforming mortgage rate, according to the Mortgage Bankers Association, declined by 0.33 percentage points, from a peak of 5.17% in early November to 4.84% by the end of December, the same range they’d been in between April and August.

All four regions experienced year-over-year declines. Note the double-digit drops in the South and West:

The steep drop in pending home sales that has now continued for months in the vast and diverse West has left its mark on some of the hottest most over-priced markets, such as San Francisco and Silicon Valley. These markets that have been hit by sales declines saw a surge in inventory for sale, and starting last summer, declining prices. The pending home sales data for the West confirms that for now this trend continues on track.

The NAR specifically pointed out the continued surge in inventories of homes for sale in the West, where sales have been declining sharply: The metros of Denver-Aurora-Lakewood, Seattle-Tacoma-Bellevue, Portland-Vancouver-Hillsboro, San Francisco-Oakland-Hayward, and San Diego-Carlsbad, which have seen “the largest increase in active listings in December compared to a year ago.”

The impact on prices is already visible in some of the hottest housing markets. In Seattle, prices dropped 5.1% in five months, the most since Housing Bust 1. Prices in the San Francisco Bay Area, Los Angeles, San Diego, Denver, and Portland all declined according to the Case-Shiller Home Price Index. Read… The Most Splendid Housing Bubbles in America Shrink