Consumer exuberance maxed out last summer and has since changed direction.

So what was all the hand-wringing in the headlines about? That drop-off at the end of the line (circled in red): 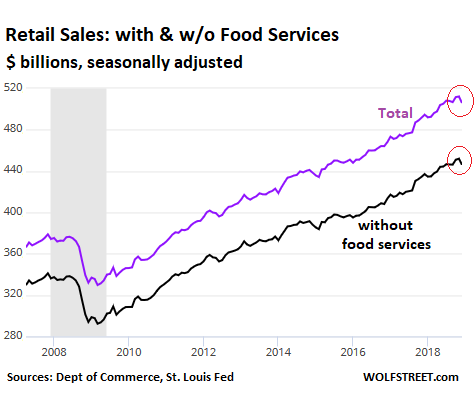 Also, today’s data pile was the “advance estimate” of retail sales. The Commerce Department will revise it, and these revisions can be fairly large, in either direction.

So why did the media go into panic mode?

The reason for the panic was the monthly decline in sales, seasonally adjusted, from November to December:

On a “not seasonally adjusted” basis, sales in December rose 8.6% from November. But this increase was lower than the NSA increase a year earlier of 12.2%. December, the peak of holiday shopping season, was the peak in 2018 as well, but that peak might not have been so hot.

Growth in retail sales on a year-over-year basis maxed out in July and August at a blistering 6.6% and 6.3% respectively. This growth rate has since declined, and in December was 2.3%. In the chart below, note the trend of declining growth since last summer. This trend takes year-over-year growth rates to the lower range of the post-Financial Crisis period. 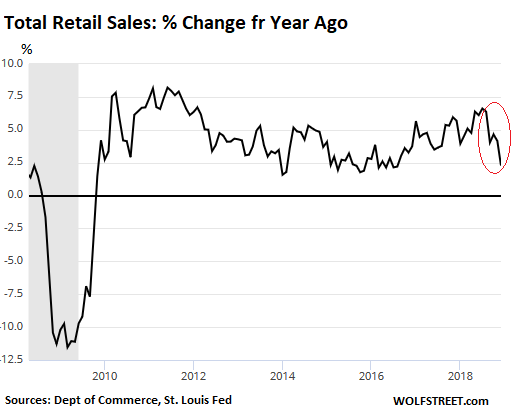 While stores in most major categories booked year-over year sales increases, there were some that even on a year-over-year basis, booked a drop in sales:

Clearly, the exuberance of consumers maxed out last summer and is now returning to lower levels.

Looking at the chart above, the year-over-year growth rates change sharply all the time, and what I’m seeing in the chart doesn’t make me panic yet, but it makes me nervous.

What will make me panic is if year-over-year growth rates in retail sales break out through the bottom of the range and drop below 2% or worse, below 1%.

Inflation and population growth currently combined amount to over 2.5%. This is a figure to keep in mind when year-over-year retail sales growth drops below that rate: Meaning that at that moment – and we’re at that moment now – adjusted for inflation, per-capita year-over-year retail sales growth may be actually turning negative. If this gets confirmed over the next few months and morphs into a more enduring trend, where individual consumers across the US on average cut back, it’s panic mode.

56 comments for “Why I’m Not in Panic Just Yet over the “Dreadful” Retail Sales that “Fell Most Since 2009,” But Nervously Look at the Trend”