By Wildfry, currently in Hong Kong.

Much of the attention on Fannie Mae has been focused on the potential merger with Freddie Mac; the repayments on the Treasury’s $187 billion of senior preferred stock; and the new equity cushion concession to ensure that the accounting loss in 2017, triggered by the new tax law, does not force Fannie Mae to draw on its funding lines with the Treasury Department.

But even as Fannie Mae’s exposure to mortgage backed securities (MBS) has grown to over $3 trillion, it has quietly taken its portfolio of directly held mortgages from $789 billion at the end of 2010 to $236 billion by November 2017 under a mandate from the FHA: 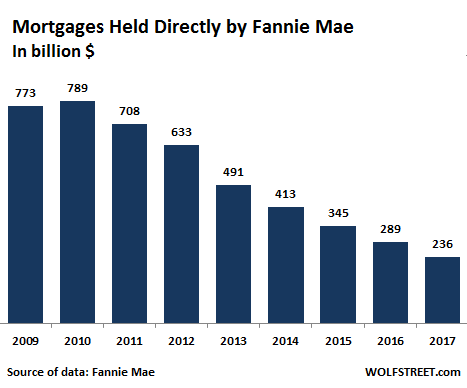 Banks have been focused on offloading their non-performing mortgages (home owner is three months or more past due). Their main driver has been the capital coverage ratios stipulated by Basel III on any portfolio with non-performing assets.

Fannie Mae’s mortgage sales, by contrast, have been a mixed bag of performing and non-performing pools. But a large proportion of the sales have been from its non-performing book. Present at the trough are the usual suspects: Goldman Sachs, Lone Star Funds, and Bayview Asset Management.

Why are these large fund managers lining up to buy non-performing mortgages?

The answer lies in the steep discount to BPO (Broker Price Opinion of the value of a property) that Fannie Mae is getting. This combined with 90% gearing available to the funds, without offering collateral, in securitized bond coupons at 2.5% to 3.5%. These combine to provide handsome returns, with average internal rates of return (IRR) of 20%-25% with very low risk.

The Funds bid for pools of between 1,000 and 3,000 non-performing home mortgages across the US, sold by Fannie Mae at regular auctions. Winning bidders in 2016 and 2017 have been securing the blocks of mortgages at a low 60% of BPO. This is particularly surprising as the auctions are occurring in a housing market that has seen growth in every quarter of this period.

Funds then have to go through the usual process of refinancing or repossessing the houses. The former taking an average of 9 months and the later 30 months. All of this is outsourced to state-accredited agents, for a standard fee which equates to between 10% and 20% of BPO. The funds are then able to either sell the refinanced mortgage as a performing loan, or sell the house itself.

So the real question should be: Why is Fannie Mae, a quasi-governmental entity, offering the likes of Goldman such fat margins to perform, on its behalf, what is essentially outsourced work?

The state-accredited agents for the repossession process are available to Fannie Mae, as are those that negotiate refinanced mortgages at reduced rates. They are the same people Goldman would use. Securitized bonds would also be available for the duration of either process. Is it that Fannie Mae doesn’t want to dirty their hands with the ugly process of reprocessing houses? It would be uncomfortable when it was set up as a government entity to encourage affordable homeownership, and so, seems likely.

Looking at this question from the other side, why are some of the buyers not bidding 70% of BPO and scooping up all the auctions? This would still provide mid-teen returns which, in today’s low interest/high risk environment, are still attractive, as they include real bricks-and-mortar collateral. Could there be some collusion on these auctions by the bidders? This also seems likely.

The auctions are in a one-bid system, which does not allow bidders to keep bidding until the highest bid wins. Each bidder has one shot. The selection of this process suggests even the possibility of collusion between Fannie Mae and the bidders themselves as it does not ensure the highest price for the seller.

The murky waters of quasi-governmental organizations still provide excellent hunting grounds for bottom feeders with the right contacts to make billions from millions of homeowners who expected to flip homes before their 2-year introductory interest period expired in those heady years before 2008. By Wildfry.

The US government bond market has soured, even the 10-year yield is surging, and mortgage rates have jumped. Read… What Will Rising Mortgage Rates Do to Housing Bubble 2?

31 comments for “Fannie Mae, the Goldman Goose that Keeps on Laying Eggs”