Orders for heavy trucks re-plunged, after false bounce off the bottom.

This was not supposed to happen. November was supposed to be the second month in what would be the upturn from the historic collapse in 2019 for orders of heavy trucks. Orders in 2019 had plunged by as much as 80% from a year earlier. That collapse in orders followed a historic boom in orders in 2018. But in October, orders had bounced, and though still down by 48% from a year earlier, it was a big move. So November was supposed to power the second step of the upcycle. And instead, orders plunged again.

Truck makers in the US received just 17,300 orders for Class-8 trucks in November, according to preliminary estimates by FTR Transportation Intelligence. This was down 21% from October, down 39% from the already swooning levels of November last year, and the lowest November since November 2015: 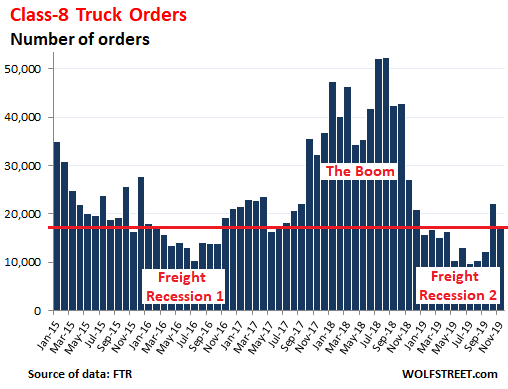 By now it has been widely acknowledged that the boom of Class-8 truck orders from late 2017 through most of 2018 was a result of a series of events triggered by companies across the spectrum trying to front-run potential tariffs, which resulted in a shipment boom, which caused carriers to order more trucks to meet this demand. But by late last year, the shipment boom had fizzled. And truckers slashed their orders.

“The fall order season has gotten off to a slow start,” Said FTR VP of commercial vehicles Don Ake. “Freight growth has stalled from the high rates of last year. This is causing fleets to be much more measured in their ordering for 2020.”

Trucking companies — they’re part of the services sector, in the category Transportation Services — play a huge role in supporting the goods-based sectors of the US economy, such as retail, manufacturing, construction, and oil-and-gas drilling. But some of those sectors, particularly manufacturing and oil and gas drilling, have encountered some turbulence this year, and shipments for those sectors have declined.

Now loaded up with the new equipment they had ordered during the ordering boom last year, and which by now has mostly been delivered, trucking companies can back off ordering even more new equipment.

Truck makers have been eating into their historic backlogs and were able to keep production levels high. But Freightliner, the largest brand in the US, has already announced layoffs at two of its manufacturing plants, as have some suppliers, including engine maker Cummins [CMI] and Meritor [MTOR].

“There is still a great deal of uncertainty in the environment which is creating apprehension in the trucking industry,” Ake said. “Manufacturing has receded for four straight months, slowing economic growth. The trade war and tariffs are destabilizing prices and supply chains. And the tumultuous political climate just adds to an uneasy mix. The industry thrives on stability, but we are now on a rocky road.”

In manufacturing, worries abound, weakness persists, but some aspects and sectors tick up. Read... US Manufacturing Stuck in Dour Mood, After the Boom Last Year

53 comments for “Trucking “Thrives on Stability, But We’re Now on a Rocky Road””