Worries abound, weakness persists, but some aspects and sectors tick up.

The US manufacturing sector remains in a dour mood, according to data released today from two sources, one painting a picture that is dourer than the other, but both agreeing that it’s not fun anymore after the manufacturing boom last year.

November was the fourth month in a row that manufacturing contracted, and it contracted a tad faster than in October, according to the Manufacturing ISM Report on Business, with new orders, production, employment, backlog of orders, new export orders, and inventories all contracting. The overall Purchasing Managers Index ticked down to 48.1. Values over 50 mean growth; values below 50 mean contraction (data via YCharts): 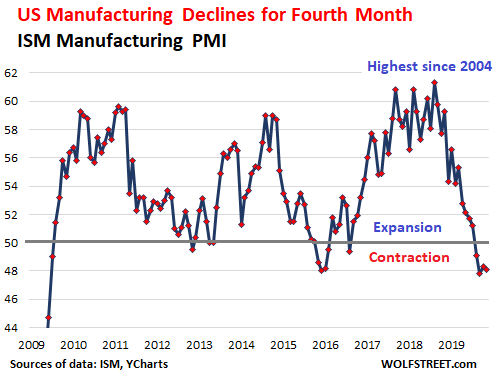 These Purchasing Managers Indices (PMIs) are private-sector measures, based on how a panel of manufacturing executives – names are not disclosed – see new orders, production, employment, etc. for their own businesses in the current month (November). PMIs are the mostly timely measure. Official data for manufacturing in November will be released in two weeks.

But preliminary official data for October, released by the Federal Reserve last month, shows that manufacturing production declined 1.5% year-over-year in October, accelerating in the wrong direction, and the biggest dip since the oil bust of 2015/2016. The index had peaked in December last year, with year-over-year growth rates peaking at 4.0% in September last year, the fastest since 2012: 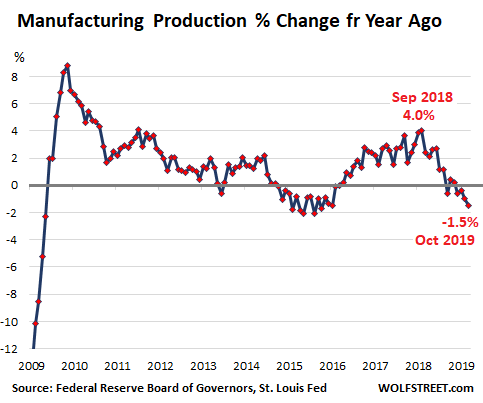 So the PMI data we’re looking at today gives us a preview of what the official data, such as the manufacturing data from the Federal Reserve, might look like over the next month or two. And it’s not pretty, according to the Manufacturing ISM Report on Business:

The executives on the panel of the Manufacturing ISM Report on Business represent 18 manufacturing industries. Of these industries, only five reported growth in November:

The remaining 13 industries reported contracting in November, in this order:

Less gloomy was the IHS Markit US Manufacturing PMI, also released today. In the data after the Financial Crisis, it never dipped into contraction mode in the first place (below 50), though it came close in June, July, and August 2019, and in May 2016. In November, the PMI ticked up for the third month in a row (to 52.6), indicating that “US manufacturing continues to pull out of its soft patch,” according to the report: 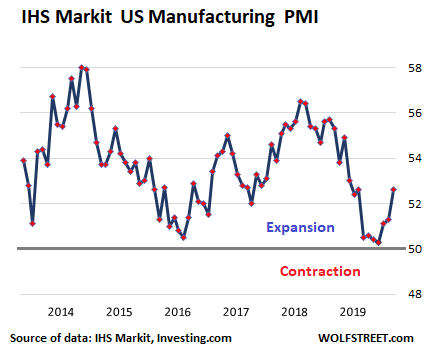 But IHS Markit Chief Business Economist Chris Williamson remained on the dour side:

Some caution is needed, as these improved survey numbers merely translate into very subdued growth in comparable official gauges of manufacturing production and factory payrolls. Business sentiment also remains worryingly subdued, with expectations about future output growth well down on earlier in the year and running at one of the lowest levels seen since comparable data were first available in 2012.

Firms remain very concerned about the disruptive effects of tariffs and trade wars in particular, both in terms of rising prices and weakened demand, though the survey also saw further worries among manufacturers that the economy could slow in the upcoming presidential election year as customers delay spending and investment decisions.”

Business confidence “remained historically muted,” the report found, “as global economic uncertainty continued to weigh on expectations.” But there were some bright spots:

Prices – both input and output prices – rose and “inflationary pressures intensified” but was still “relatively muted,” and “others noted that increases were generally only slight overall.”  As reasons for these price increases, however feeble they may have been, executives cited “supplier shortages, tariffs and higher raw material costs.”

So this is the image we get of US manufacturing: Depending on who you ask, and depending on the segment, manufacturing remains in a mild contraction, or is starting to pull out of a “soft patch” but without conviction as worries abound. Even the ISM Manufacturing PMI, now in its fourth month of contraction, indicated that five of its 18 sectors were expanding, including some biggies.

55 comments for “US Manufacturing Stuck in Dour Mood, After the Boom Last Year”