As US oil production surges, the global oil market will be fundamentally oversupplied in 2020.

US shale oil producers are continuing to push production to new highs, even after having cut back on drilling activity, as they complete thousands of wells they’d previously drilled. And given this surge in production, the US has become a net exporter of crude oil and petroleum products (which include gasoline, diesel, jet fuel, etc.) in September for the first time, meaning the US imports less crude oil and petroleum products than it exports (Momentous Change in US Crude Oil Market, with Global Impact). So below is an estimate by Rystad Energy of what the pricing environment might look like next year:

Barring additional oil production cuts by OPEC in 2020, Rystad Energy forecasts a substantial build of global crude stocks and a corresponding drop in oil prices. A showdown is taking place in Vienna as OPEC countries plus Russia will gather in the Austrian capital on 5-6 December to discuss oil output levels in 2020.

“We have a clear message to the OPEC+ countries: A ‘roll-over’ of the current production agreement is not enough to preserve a balanced market and ensure a stable oil price environment in 2020,” says Bjørnar Tonhaugen, head of oil market research at Rystad Energy. “The outlook will be bleak if OPEC+ fails to agree on additional cuts.”

According to Rystad Energy’s estimates, the global oil market will be fundamentally oversupplied to the tune of 0.8 million barrels per day (bpd) in the first half of 2020. Empirical evidence has demonstrated that a 1 million bpd surplus of oil can be expected to cause an oil price decline of around 5% per month, implying a potential drop of 30% over six months.

“If OPEC and Russia don’t extend and deepen their cuts, we could see Brent Blend dip to the $40s next year for a shorter period,” Tonhaugen said. “In order to ensure a balanced market, our research indicates that OPEC would need to reduce crude production to 28.9 million bpd – a drop of 0.8 million bpd from the level seen in the fourth quarter of 2019-levels – given our forecast for demand, non-OPEC supply and the impact of new IMO 2020 regulations on global crude runs,” Tonhaugen added. 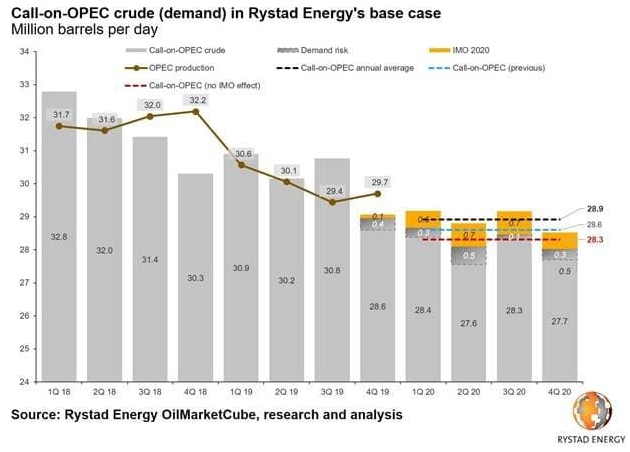 New shipping fuel regulations, the so-called IMO 2020 effect, are expected to create more demand for crude oil in the near-term. However, if the actual effect of the IMO rules on crude demand turns out to be zero the “call on OPEC” – the amount of OPEC oil needed to meet demand – drops by 1.9 million bpd year-on-year to 28.3 million bpd.

“Despite decent cut compliance from the group as a whole and large involuntary declines in Iran and Venezuela this year, OPEC’s current crude production of about 29.7 million bpd is far above the ‘call’ for 2020. Alas, without deeper cuts taking effect in January 2020, large global implied stock builds are on the cards,” Tonhaugen remarked.

Base case: Extension of current production cuts to June 2020. Global oil market will be oversupplied to the tune of 1.2 million bpd in 2020. Significant oil price correction, possibly down to the low $40s for a short period, is likely.

Deeper cuts: Additional cut of 0.75 million bpd on top of the 0.3 million bpd in the extension scenario would reduce the supply overhang and ensure stable prices.

No deal/market share war: A ramp-up to maximum production capacity in all countries could have devastating effects. With potential stock builds of 2.3 million bpd, oil prices could fall below $30/bbl – lower than during the previous lows of 2016. Such a scenario would be devastating for the forward curve structure as potential stock builds would be larger than what we have observed historically. 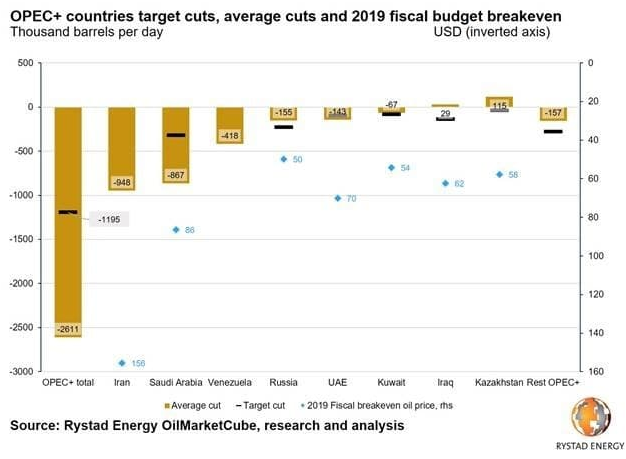 Rystad Energy finds that OPEC+ as a whole has cut oil production by 2.6 million bpd year-to-date, compared to October 2018 reference levels and the cut target of approximately 1.2 million bpd. The additional 1.4 million bpd of “cuts” are owed entirely to involuntary declines from Iran and Venezuela, both of which are exempt from the agreement. Saudi Arabia has led the group’s compliance by cutting 870,000 bpd in 2019, or 2.7 times its target cut of 322,000 bpd.

“Saudi Arabia has signaled that it seeks stricter compliance by other producers and is no longer willing to shoulder the burden of sub-compliance by others, such as Russia, Iraq and Kazakhstan, which have all failed to reach 100% compliance with their target cuts,” Tonhaugen said.

US exports of crude oil and petroleum products – gasoline, diesel, jet fuel, naphtha, and many others – exceeded imports in September by 89,000 barrels a day, and so the US became a “net exporter” of crude oil and petroleum products for the first time in the EIA’s data. But US “Energy Independence” is more complicated. Read…  Momentous Change in US Crude Oil Market, with Global Impact